King Gizzard and The Lizard Wizard at Laneway 2017 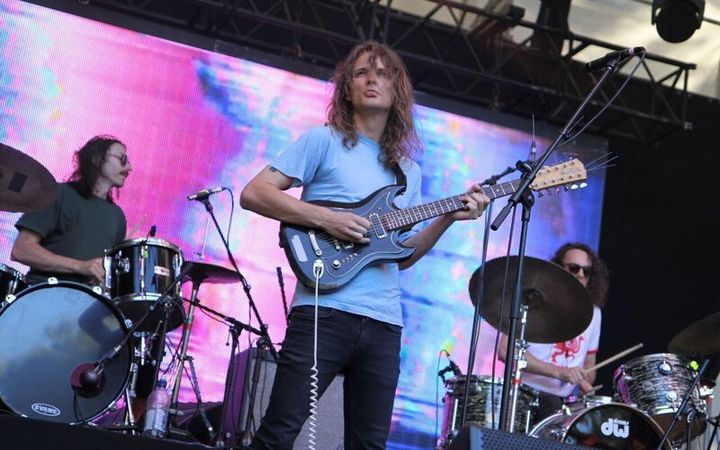 King Gizzard and The Lizard Wizard are an Australian psych septet who have promised to release five records in 2017, starting with the forthcoming Flying Microtonal Banana. Released later this month, it will be the band's ninth album since 2012, an extraordinary output for any band, which they largely put down to their love of studio time as lead singer Stu Mackenzie told RNZ.

“It’s the fun part to me, making records. Just being creative and making music. Touring is fun too, it’s all fun, but to me the best bit is the making of records and seeing it all come together. We thought maybe we can try and make five albums this year because we have our own space for the first time. I think we know quite clearly what the first three records are and after that it all gets a bit hazy. It keeps kind of changing. I hope we get there.”

“A lot of music that we’ve made has come out of jams.  I guess we’ve been playing together a long time.  We know each other as musicians pretty well. But we’re not as tight as you might think, we’re pretty loose."

Yet being tight is a necessity for a band with two full drum kits onstage for every show. Percussionist Eric Moore says that much of that on stage perfection comes down to full-on rehearsal schedules.

"When we know a tour is coming up we’ll rehearse a fair bit, but outside of that we’re mainly just making new songs, we don’t really ever go back. We just get bored of playing old songs.”

Psychedelic is the most used phrase to describe the band although it's not one they themselves would use to describe their sound. For King Gizzard ideas are flowing thick and fast and they don't stop to think about where they come from or how they might be received.

"It’s human nature to want to categorise things, it just makes things easier. We’ve deliberately made music psychedelic in the past. But most often we haven’t. Usually we’ve been exploring some other zone and our music gets labelled that just because it’s weird or something. I think there’s so much more music left to explore."