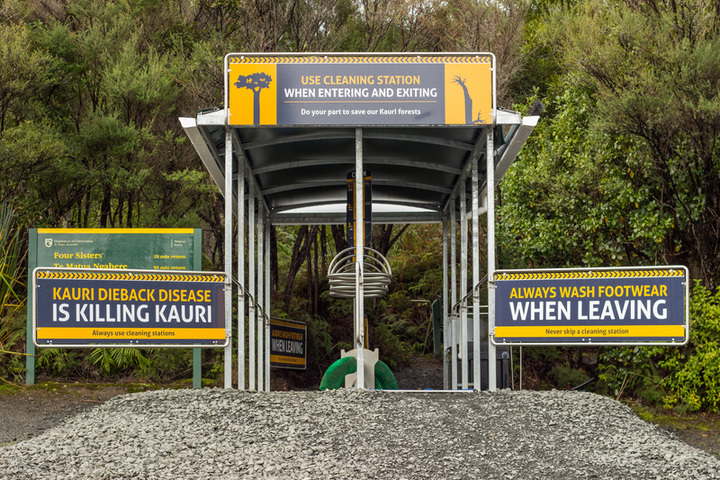 If a Kauri dies, can anyone hear it?

Dieback is a deadly disease killing our kauri. Microscopic spores in the soil infect the roots and damage the tissues that carry nutrients to the tree, effectively starving the kauri to death. These spores spread with soil movement and it only takes a minute amount with a tiny number of spores to create a new area of disease.

A Kauri Cries is a website designed to bring awareness to this preventable issue facing our native species.  Using state of the art camera’s to film the dieback’s visible physical manifestation on the Kauri, the images are then enhanced and manipulated and turned into music.  A Kauri cries is a joint venture involving members of the Auckland Philharmonia Orchestra, and the result is a piece of music, almost two minutes long that quite literally is a Kauri's swan song.

As you can imagine the process is a complicated one and converting visual images to orchestrated score was masterminded by Tom Cosm.  Cosm, a psy-trance DJ and music producer from Christchurch has dipped his toes in this realm before when he used motion capture to transform a spider’s movements to create a dub-step tune.

“I would use the motion tracking of the x and y axis of the dieback to create pitch and volume of the notes and that would convert it into a concoction of codes and rules that I made which would eventually spit out the musical notes.  I tried different types of algorithms to find patterns.  For instance the double bass and the cello are great for low foundation notes.  Some of the trees had running lines of dieback where as some of the trees had very scattered dieback which were more suited to the flute and violin because they could jump all over the place and be quite wild.”

With 3 times more Kauri infected in the last five years, the most important thing we can all remember to do to prevent the spread of dieback is simple – wash our feet.

For more info and to immerse yourself in the aural experience you can explore the website www.akauricries.co.nz