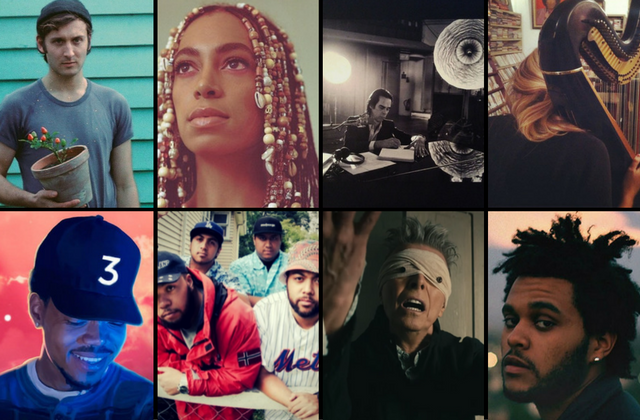 Nick Bollinger steers the RNZ Music team in talking about some of our favourite music of the year.

David Bowie - Lazarus, from Blackstar
We all loved this album, for its profound and prescient takes on mortality and its experimental jazz based sound. Adventurous to the end, Bowie set the bar high for anyone releasing records in 2016.

Mary Lattimore - Otis Walks Into The Woods from At the Dam.
Mary Lattimore is a harpist in Phillidelphia who has scored films and worked with the likes of Thurston Moore, Sharon Van Etten, Jarvis Cocker and Kurt Vile. The older I get the more I am searching for space, quiet, solitude and I find that this kind of ambient music can provide it. Zac Arnold

William Tyler: I’m Gonna Live Forever (If It Kills Me) from Modern Country
In a year in which many American artists felt a need to address the state of the nation, former Lambchop guitarist William Tyler made an all-instrumental album that, in its own way, had things to say about his homeland. Drawing on early folk and country melodies, he combines loops, percussion and his own dextrous guitar picking to create sweeping impressionistic pieces, which evoke modern landscapes inhabited by ancient ghosts. Nick Bollinger

Solange: F.U.B.U. from A Seat At The Table
Certainly Beyonce got everyone’s attention by commanding all platforms at once - video, poetry, music - and made some strong social/political statements (especially in the video album). But her sister achieved the same thing, more quietly but at least as powerfully. Much of A Seat At The Table is classic 70s/early 80s-style soul (thanks largely to collaborator Raphael Saadiq). F.U.B.U. (For Us By Us) might be the album’s most aggressive track (interestingly a co-pro with Dirty Projectors David Longstreth, a collaborator from well outside the hip-hop/R&B realm). A stealthy, brooding piece of funk, with ominous horns. Yet even here Solange sings so delicately, with such understatement, that it’s a shock when you realise how pissed off she actually is. An album that only seems more pertinent in the wake of the U.S. election. Nick Bollinger

Chance the Rapper: Summer Friends (Clean  Version) from Coloring Book
This is a cheeky pick as I can cover off a few notable mentions (Bon Iver, Frances and the Lights, Kaytranada and Kanye). The album is super uplifting, using a lot of gospel and choral elements as well as the vocal manipulation that has become the signature 2016 sound (it’s all about the [vocal] process!). It is a very well-crafted album, with classic hip hop upbounce repping (No Problem) and light hearted club jams. I’ve chosen Summer Friends because it is quite an introspective, and wistful track. I love the cadence of Chance’s rhyming - almost invoking the Bone-Thuggs doo-wop  rolling gospel rap delivery. The track is a reminiscence of growing up in Chicago, a city well- known for disproportionate levels of gun violence and homicides, where lives are tragically cut short. Yadana Saw

SWIDT - No more parties in Stoneyhunga from SWIDT VS Everybody
I had to choose one SWIDT track, the South Auckland outfit have been one of my standouts in 2016.  I almost chose '312' which is a more instant hit, but 'Stoneyhunga' has the better verses.  Spycc and INF straight up crushing it, everything this crew touches is quality, I can't wait to see what they deliver in 2017. Alex Behan

Conor Oberst - Gossamer Thin from Ruminations
I’m a diehard Bright Eyes fan from way back but like a lot of people I have felt that Conor Oberst has lost his edge a little bit in recent years. Released in the wake of some very serious personal problems however, his latest album Ruminations is a sublime return to greatness and a really heart wrenching study of loneliness. Gossamer Thin is super sad, super grim and super pretty. That it took such distress and torment for Oberst to deliver once again is a disturbing reminder of what we really want from artists like him. Katie Parker

Anderson.Paak: Come Down from Malibu
I honestly haven’t moved past this album. Come Down is a funky little number, produced by Hi-tek and I like that the high hats are prominent, as drums are Paak’s workhorse instrument (he used to be on drumkit in his local Baptist church band). I also think the vocal delivery contrasts quite strongly from the Chance track, his signature raspy delivery with a good dose of big hip hop talk invokes a bit of James Brown’s spirit. Yadana Saw

Paul Simon: Wristband, from Stranger To Stranger
Paul Simon is surely one of the finest lyricists of all time and at 75, he continues to make it seem effortless. Wristband is a charming story about a seemingly meaningless event that Paul extrapolates into a poignant reflection on aging, and the eternal struggle of not quite being cool enough to get through the door. An addictive, perfect little pop song. Alex Behan

The Drones with Private Execution from Feelin Kinda Free
Any one who bemoans there isn't any good rock music anymore or any good protest music anymore needs to listen to Feelin' Kinda Free by The Drones. It's the bands seventh record and has been described as a big left turn for the group. The band describe their intention behind the record as “We went ‘f it’ and went spaz. It’s a pretty weird record and you can dance to it. It’s time to have a groovy Drones record. We’re sick of being a bunch of drags.”
The record guts and jerks over 40 minutes. Gareth Liddiard's vocals slur and sneer while Fiona Kitschin's are the counterpoint, the sound like the voice. The bass lines rival those on Rowland S. Howard's solo work and the guitars a blisteringly hot. Lyrically Feelin Kinda Free takes aim at Australia's neoliberalism, class warfare, the limp left, dumming down of society, and the way that Australia doesn't engage in it's history. Zac Arnold

The Weeknd/ Lana Del Rey - Star Girl Interlude from Starboy
The Weeknd’s Starboy is a great album and it's kind of incredible how quickly he has become one biggest and best pop stars in the world. Stargirl is my favourite song on the album and as the name suggests, at just under 2 minutes, it's more of a weird little moment than a track. As a huge Lana Del Rey fan/apologist I obviously love this for her, but the way it fits into the album as a whole as well just elevates the whole thing and contributes to this incredible atmosphere that I love. Katie Parker

Nick Cave - Rings Of Saturn, from Skeleton Tree
Raw emotional honesty, with songs written both before and after the tragic death of his son. With dense and vivid poetry from Nick, and sympathetic spacious, and eerie textures from Warren Ellis and The Bad Seeds, this is one that I’ll be saving for cathartic crying sessions. Kirsten Johnstone 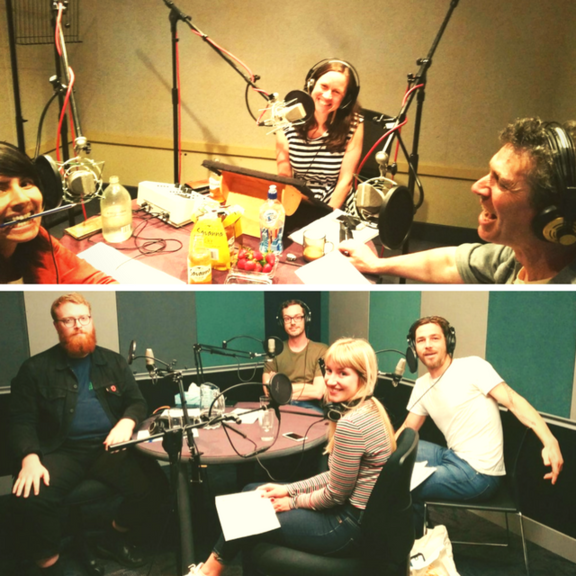 Hear more discussions about the music we've loved this year:

And here's the Spotify playlist in case you want songs in full, without the discussion. We've included plenty of extras in there too. Happy listening!