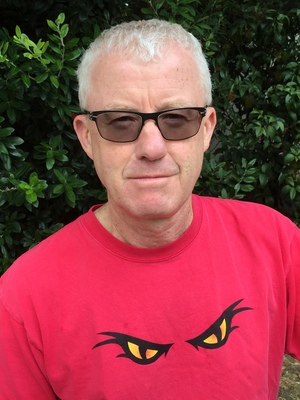 “If you’re playing it safe you’re losing”, states Mark Cubey, outgoing Saturday Mornings with Kim Hill producer.  And not quite the fitting sentiment for someone who has clocked ten years as the producer of RNZ’s flagship Saturday show with one of the stations most beloved and feared broadcasters. But for Mark Cubey the last decade is an outlier for someone whose career has spanned print, music, radio, and design.

“I’ve never done anything for more than three years...usually it’s about 18 months.

A preternatural seeker of new horizons,  Mark has often been at the forefront of arts and cultural endeavours ahead of their time, but seldom the one who would still be there long after the opening ribbon had fallen away.

After a stint as editor of Victoria University student rag Salient, he happened to help typeset the first edition of Keri Hulme’s Booker Prize-winning The Bone People. But not before he co-founded The Uncut Funk Show across the hallway at student station Radio Active, which later became The Wednesday Night Jam, the country’s longest running hip hop show that still airs to this day. He’s written, sub-edited and proofread for Listener, NBR and other notable publications. He’s also been behind the beginnings of many magazines (RAD, Scope, Loop). It’s clear that Mark’s natural home is somewhere close to the zeitgeist. As proven by an old early-90s edition of Scope, where a 3-page spread introduces us to the world of karaoke.

Yet a desire to be “at the bleeding edge, is a really fun and expensive place to be,” he says, ruefully. Perhaps this lesson is what made the Saturday morning RNZ gig appealing, as he kept asking himself, “where is the job that’s as good as this?”

He reckons there wasn’t one, “there’s so many great people to talk to and you want to pack it in as much as you can” on Saturday Mornings.

As he begins his new role as Manager of NZ Festival of Writer’s Week, working Monday-Friday, he admits that it will be weird no longer hearing his stuff on Saturday Mornings, though as he realises the sniff of something new - maybe something he hadn’t thought of in his tenure - a mischievous smile quickly spreads across his face,”but it’ll be great!”