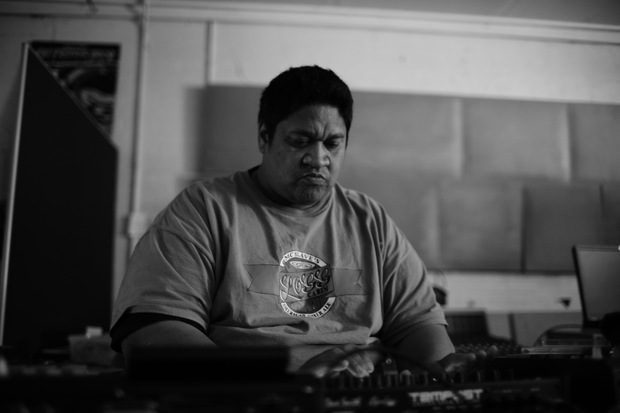 DJ Fitchie AKA Mu behind the controls Photo: Sarah Hunter

As the youngest of five siblings,  Chris Faiumu AKA DJ Mu did things a little differently.  "An accident" in his own words, Mu is the musical outlier in a sports-mad family from the proud sports locale of Wainuiomata.  The diverse, working class suburb of Wellington's Hutt Valley has produced many first-class rugby union and league players, such as Tana Umaga and Piri Weepu.

Rugby or league were seen as a ticket out and over the hill says Mu, though his journey over the hill was more to do with his mum, "who was going to try something different the fifth time". Presenting her son with the prospectus of private boys 'boarding school, Scots College, Mu recalls agreeing to attend with little thought, being more concerned with "what we were going to have for dinner" at the time.

It was on his first day at Scots College, in front of the Headmaster after getting into a fight, that Mu realised what he had signed up for.  He quickly found his "crew" that exposed Mu to a new world of music that included artists such as Talking Heads and Van Morrison.  Radio with Pictures was appointment viewing for him and his friends, and exposing them to sounds and videos they had never seen.

Mu's next sonic discovery was when he attended Victoria University of Wellington, as "the only Faiumu with School C" he enrolled for the BSc, but spent most of his time "playing basketball at the Rec Centre".  The studies further stalled once Mu located the student radio station, Radio Active.

It was here that Mu expanded his musical appetite, becoming one of the co-founders of bass reggae collective Roots Foundation.  Radio Active was where he also met Fat Freddys' vocalist Dallas Tamaira, and got his hands on his instrument of choice: the Akai MPC sampler.

Nicknamed "his girlfriend", Mu's MPC has featured on all of Fat Freddys' studio and live releases. It is still the workhorse in their Bays Studio. When asked if he could ever imagine that this band would be his livelihood for the past 15 years and counting, Mu chuckles, "I didn't see this coming, I feel very blessed and honoured to have the job we have."