Ravens in The Wood Shed

Ravens are a trio of women who say they want to bring a spirit of punk to acoustic folk music. Jess Shanks, Alice Ryan Williams and Reb Fountain are all members of Lyttelton collective 'The Eastern'. They join Nick Bollinger to play a few songs in session.

A woodshed in Arthur’s Pass is the symbolic birthplace of Ravens – a new trio boasting three of this country’s top female folk musicians.

In 2010 banjo player Jess Shanks was in the small township in the Southern Alps to record the second album of The Eastern, the Lyttelton-based collective, of which all three Ravens have been members. “We were up there for at least a week, and it rained and it rained and it rained, so I made a little space in the woodshed and I went out there and had some songs to work on.”

One of the songs that came out of her solitary woodshedding was ‘Breaks Like A Love Song’, which appeared on The Eastern’s album, Arrows. But it was when guitarist and singer Reb Fountain turned up at a house party one night some time later and performed a rousing cover of the song - “totally badass and punk rock” – that the idea of Ravens was born. “I was totally blown away. That was a long time ago and we’ve kind of been brewing since then.”

While some of their material has been aired before, Ravens have also produced new material, tailored to the combination of the three female voices and their assorted acoustic instruments. “We’ve been writing as we’ve been rehearsing,” says Fountain. “And they’re particular kinds of songs, they’re strong and feminine and punk, so there’s elements of the country and folk but we wanted to do something a little different. We wanted to break through the genres and boundaries.”

A revelation to Fountain and Shanks has been the songwriting contributions of fiddle player Alice Ryan Williams. Her song ‘Good Wood’ came to her one day when stacking firewood. As she sang the melody to herself, she began to imagine the voices of Jess and Reb joining her in harmony.

Though the three Ravens live in different parts of the country – Shanks and Williams in the South Island, Fountain in Auckland - they meet up for rehearsals. “Ravens like to fly”, says Fountain. They are currently on the road together, opening shows around the country for Skyscraper Stan. 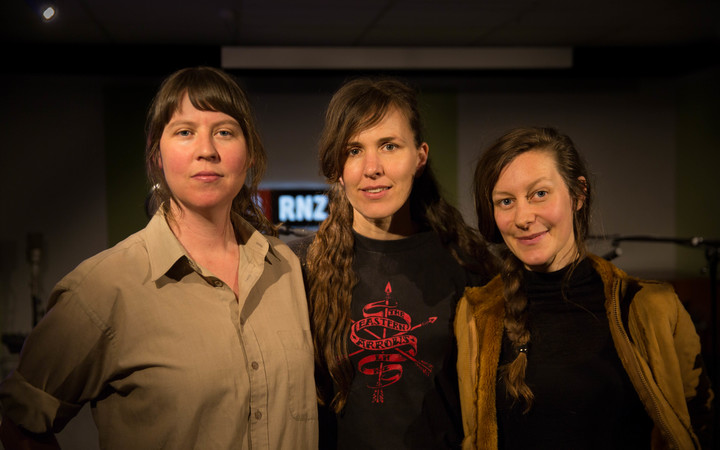