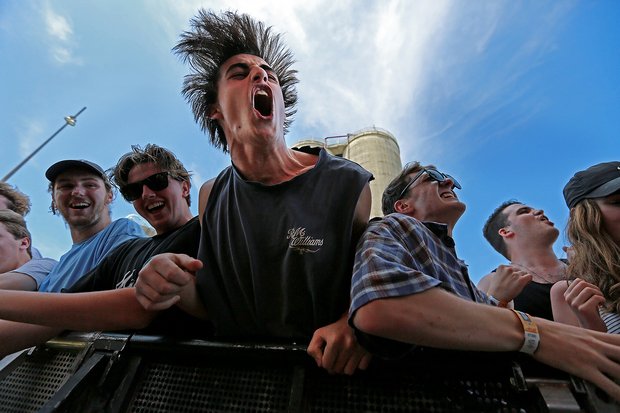 The New Zealand contingent this year includes Fazerdaze, Yukon Era, The Veils, Fortunes, k2k, Nikolai, Purple Pilgrims, The Chills and Cut Off Your Hands (who recently got back together for The Others Way).

Ahead of the announcement, Music 101’s Alex Behan spoke to Australian duo Flight Facilities about what makes Laneway stand out among other summer festivals.

“I think it's one of those [festivals] where you go, ‘Who's that?' Then six months later you go, ‘I can't believe I didn't know who that was’.

“They take risks with new artists. They booked Lorde before anyone really knew who she was. And then by the time Laneway came around, she was number one.”

As festival co-promoter Mark Kneebone said last week, the festival will take place on four individual stages, which will be in Albert Park and on the surrounding streets in the precinct. It’ll mean more space and, thankfully, way more shade.

“We’ve been working with Auckland Council and the Mayor’s Office for the past 12 months to make sure we have the best possible innercity location and we are all relieved and excited it has come together,” he said.

“The new site is 70 per cent bigger, but despite the increase and for comfort’s sake we are keeping the crowd capacity the same. Music fans can come and hear some of the most exciting music acts on the planet, have plenty of space to relax in the shade under the beautiful trees and have a really amazing day.”

Laneway first came to Auckland back in 2010 where it was held in Britomart. It moved to Aotea Square the following year before settling into Silo Park in 2012. It’s now on the move to Albert Park since work is set to begin on a redevelopment of the downtown area.

Tickets for the festival are on sale from 9am Wednesday 21 September through Laneway’s official site, with a presale for festival members available from 9am-5pm Monday 19 September.

Here’s the festival line-up in full: