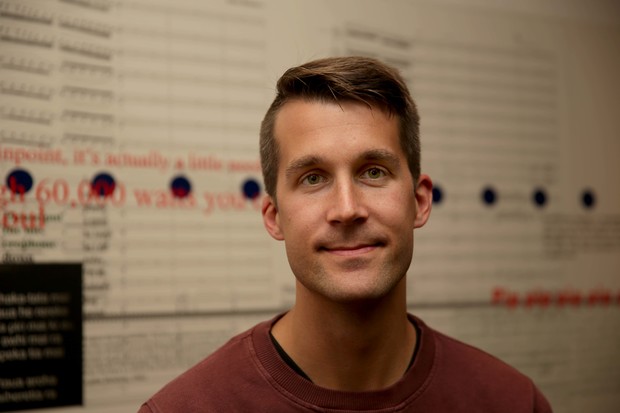 Drawing together musicians, producers, composers, labels, promoters, industry professionals and fans, Going Global is now in its third year of encouraging the global exchange of ideas, techniques and trends in the music industry.

One of the speakers at this year’s summit was Tom Wironen from Brooklyn-based Post HOC Management, who’s currently charged with steering the careers of The National and Unknown Mortal Orchestra. He talks to Sam Wicks about his history with Ruban Nielson’s psych-funk outfit.

Tom: I’ve always been a super fan, right when [Ruban] put those first couple of songs on the internet I was like, this is the band I’ve been waiting for – I was obsessed. That was probably the record I listened to the most that year. And then when the record came out on Fat Possum, the first thing was like, I’ve got to listen to this – ’cause the way that it was even described, this is the perfect blend of everything I love.

When did you first see UMO live?

The first time I saw them live was actually probably at South By.

Okay, so I was actually there that year and I saw a couple of shows that UMO did – so this was when Kody was drumming for them.

Yup, and they played five shows in one day, and I think I caught the last show and Ruban had lost his voice at that point. And then I was sort of talking to another band at the time and I was with a friend who works at [Jagjaguwar] who ended up signing them and he was like, ‘You know that they’re actually without a manager right now?’ So I was like, are you kidding me? This is my favourite band.

I stalked them online. I was like, who is their agent? Who can introduce me? And I found out that they had the same agent over in the UK that works with one of our other bands, so I was like, ‘Tasha, you’ve got to put me in touch’. So she put me in touch…

And what was your pitch? How did you reach out to him?

I was just like, I’m a big fan and I would love to talk to you about management if you’re interested. And we spoke for four or five months before we started working together. He took his time, he wanted to make sure it was the right fit, I think … that was four years ago so we’ve been working together for four years.

So the first thing when we started working together, what I really felt like was important for them to do was have a more global focus. I feel like they’re just touring around the States, they do the occasional New Zealand/Australia shows, and that was it – there wasn’t really a lot of strategy to it. And I think the UK and Europe is such an important market. I mean, it’s almost half the music market as far as live sales, record sales, so it’s huge. They finally signed to a label – Jagjaguwar – that had a worldwide distribution, which I think was good and it allowed us to like… when II came out we made sure we went to Europe right away. We went to London, we played Berlin, Paris, so the bigger cities there right away and came back and did festivals.

The big strategy was to increase our presence there, and then went to selling… I think the first record sold 800 copies in the UK to the next record sold 12,000 copies or something. So it was just a big jump there. I think they found support with radio over there and really just being present there helped a lot, so they started increasing their audience in places they hadn’t been before and I think it allowed them the ability to tour more, make it a more financially sustainable thing, and we started slowly growing the audience. ’Cause you’ve seen them before – they’re an incredible live band. If you listen to the record, you love the record, you go see them live and you’re like, shit, this is the best band!

They’re unrelenting as a touring outfit. Tonight they’re playing at the Greek Theatre in Berkeley with Tame Impala. When do you tag in and tag out in terms of being on the road with them? If they’re not being looked after by you, who is with them?

I don’t actually tour a lot with them. I’ll go to some of the bigger shows – if I weren’t here for Going Global I definitely would have gone to that show because it’s going to be an epic show. They’ve never played together – it’s sort of like, why not? It’s such a great bill. I’ll go to some London shows, some LA shows, obviously the New York shows, some festivals. But generally I think you want to hire a great team around them on the road, so we have a good tour manager, a good sound engineer, a lighting director, and I think that that’s so important because outside of being on point and having a great show, it takes other people to help that happen.

Ruban puts his body on the line for UMO as a touring artist – he’s all the way in at all times and pretty transparent about that in terms of communication with his audience through social media platforms. Would that be fair to say?

Yeah, I definitely think he’s all in. It’s 24/7 with him with UMO. Management is a really exhausting job. You know, it’s 24/7 and you want to make sure the artist is going to work as hard or harder than you, and I think there’s no one you could say that more about than UMO. [Ruban’s] the hardest working person I’ve ever met. When he’s not touring, he’s writing, he’s recording, he’s nonstop. It’s pretty unbelievable. And yeah, his social media presence is spot-on.

It’s an outspoken social media presence, whether Ruban’s speaking plainly about his mental health, what he’s imbibing on the road, his party politics. Does his plain speaking on social media represent a liability for you as a manager?

No, I don’t think so. I think people crave honesty and I think the problem with a lot of artists today, they’re scared to voice their true thoughts and feelings because of how it gets blown up on social media or picked up by blogs, and I think that’s why he’s got such a big following on social media is because people know that they’re going to get the real Ruban. Yeah, it really doesn’t concern me. He’s genuinely just a really good person that sometimes likes to share a lot on social media and I think it’s generally a positive thing.

Outside of steering UMO’s career and the strategy behind what they’re doing, do you have a caretaking role in this in terms of making sure Ruban and the band are in good shape?

Absolutely. I think any manager a lot of your job is to look out for the bands, to make sure they’re being taken care of, they’re comfortable – not only from where you’re sitting but also the people they’re working with. Like, are the shows that are being confirmed, are the promoters looking after them, are they getting the right treatment, and things like that. So yeah, definitely, I think that’s a huge part of management.

Does that mean then you are keeping an eye on his feed for clues as to how he’s doing on the road when you’re not with him.

Yeah, definitely actually – that’s a good point. I’ll definitely look at his Twitter. Because sometimes there’s a little bit of a disconnect – we’re not in the same state. I can talk to him every now and then but sometimes you’re not really understanding how he’s feeling. So yeah, I think it’s a good way… it’s a way to gauge how a show went or show things are going, for sure.