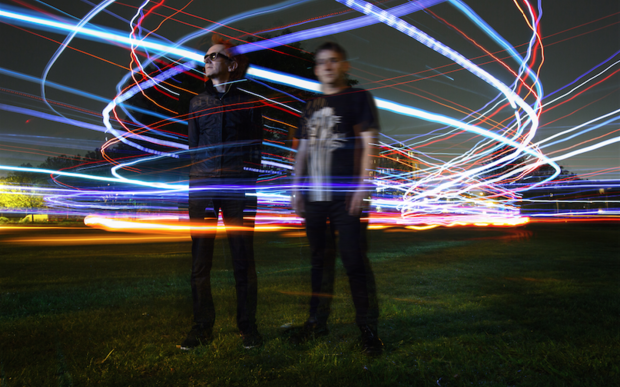 For nearly 20 years, Pitch Black’s Paddy Free and Mike Hodgson have been refining their digital dubs on stage and in studio, evolving what was first envisioned as a side project when the duo debuted at The Gathering ’96 in Takaka Hill, Nelson.

Pitch Black have just released Filtered Senses, their first album of new music in nine years, and a release that represents a triumph over the tyranny of distance.

Sam Wicks checks in with Paddy and Mike in their current HQs to find out about making music at a distance.

Paddy: Yes, I’m in the Lower East Side of New York in the East Village and I’ve been lucky to have been here for most of this year because my partner is up here doing a dance residency.

Mike: And I’m in East London so we’re both residing in the east. It’s 11:45pm, I’ve just spent the day at Notting Hill Carnival, it’s been a gloriously hot week in London – there’s just people out everywhere having a good time and it’s London at its absolute best.

Paddy: Well, I’ll see you that and I’ll raise you – here in the East Village it is a stokingly hot day. And, hey, I went to a fantastic festival too called the Afropunk Festival on the weekend over in Brooklyn and that was awesome. Looking at the human scenery was actually the higher point of it.

Paddy, with your shock of dyed hair and wiry frame, you were no doubt a part of that scenery.

Paddy: Yeah, absolutely, I was representing the people born with the issues and experience of being born profoundly Pakeha, so yeah.

The nature of this interview set-up right now is the nature of your production partnership in recent years – this is music making by remote a lot of the time.

Mike: Yeah, it’s a very similar process to this process of this interview. Paddy and I spent about 18 months sending files and sounds and noises and possibilities backwards and forwards, mainly from London to wherever Paddy was travelling, and then we sort of came to the conclusion that we actually had to be in the same room to finish the record, and so we just managed to work it out that Paddy could come to London for two weeks and we sat in a room from 9am till 3am and created an album in the old school way of one, which is to make it in a studio over a period of a couple of weeks.

For that two-week production session you were in a loft in Hackney, and I understand it was the first time in several years that you guys were even in the same country. Facetime is at a premium…

Mike: Yes, it is. We were lucky that we were able to dedicate that time just completely to making a record – it was definitely much more fun.

Paddy: Yes, and I’d been in New York for all of this year so I actually hadn’t listened to any of the songs outside of headphones as I’d moved from Airbnb to Airbnb, and also the loft was also my bedroom so I could either stretch out on the bed when Mike took over the controls and then it was there first thing in the morning when I woke up. It was the ultimate residential studio.

Before you were together in the Dub Loft and you were just swapping ideas, swapping files, what’s the starting point for that exercise?

Mike: I come from creating an ambient, so I was in Berlin for New Year’s and recorded lots of sounds, so I was using some of those noises of New Year’s Eve in Berlin to start building palettes of sounds and then I would send those to Paddy and he would come in and add some beats or some melody, and then I’d get that back and then I’d dub that up a bit and make it a bit more interesting and quite often the original sounds would disappear.

Paddy: And the process, although it was actually thousands of miles away, we do tend to sort of A-B between each other when we are in the same room; either I’ll do something for a bit with my hands on the controls while Mike sits back, and then he’ll jump up and I’ll sit back, and it’s a nice sort of a way. So that actually was a case of the more things change, the more they stay the same, even though there was this time lag and we were in different time zones – but yeah, it was the same but different.

Pitch Black’s process is about reduction as much as it’s about production. How much of this stuff are you throwing away do you think?

Mike: Well we used to have this thing, ’cause we’ve both got solo projects and we’ve got this thing that any sound that ends up in Pitch Black has to be approved by both of us, and occasionally there’ll be something and it’ll be like, ‘Nah, that’s not working – into the solo project it goes,’ which is quite good because we’ve both got solo projects for our own personal desires. We can let things go quite quickly if they’re not working for the both of us.

What would be an example of that, where for example, Paddy, you vetoed a sound that Mike was bringing to the mix?

Mike: The Berlin fireworks I was just talking about didn’t end up making it into the track, but the atmosphere at the beginning set up the sort of creativity that the song became and then those songs just disappeared and they will appear in my next solo project.

A handful of cuts on the album have already got the remix treatment, including one in the hands of Digital Playground that your son Sam’s involved with. It must be a great feeling to get two Hodgsons leave their fingerprints on a Pitch Black track?

Mike: Yeah, we didn’t give them much time to do it because the original track that we thought was going to be the first track off the album didn’t end up being the first track, so we had about 10 days to get these remixes done before ‘Invisible Chatter’ was released. I knew Sam was managing this new, young electronic band and it was like, ‘Hey Sam, do you reckon you can get these guys to do it?’, and they were totally up for it and sent back a very beautiful remix within about seven days of being asked.

Paddy: I should add that also Sam’s first a lighting guy and now a video guy so he’s following in Mike’s footsteps, and he’s going to be doing our lights and video when we do our next summer tour in 2017.

Mike: Yeah, it’s nice watching your child grow up inside the industry and then find his own place and make their own name for themselves.

It’s been 17 years since you released your debut Futureproof and the name alone was a bold statement of intent. Do you feel like the music you were making back then was and is future-proof?

Paddy: I think in a kind of a way it is in that we’ve never, for better or for worse, been stuck in one genre. Like, electronic music, the thing about it is the palette is so wide; if you imagine it, you can make it, you know. If you want 10,000 Tibetan monks chanting, you could go find a sample and you could double it 10,000 times if you really wanted to. We’re always influenced by what’s going on but we’re never firmly in one genre. There’s tempos always ranging from zero up to about 180 on every album, so we’re never just one thing that lives, flourishes and dies.

Mike: Yeah, also we grew up when you made albums so when we get together we make albums – there’s no tracks floating around that didn’t get finished. The idea is that there’s 60 minutes of music and it’s a journey, and each of the five albums I think stand up from the time that they were made and into the future.

You’re four months from Pitch Black’s 20th anniversary, marking the date that you guys performed at The Gathering ’96. You’re playing Rhythm and Alps in Wanaka this New Year’s – do you have any plans at this stage of how you’ll mark that anniversary with the performance?

Mike: We’re just beginning to start to talk about that this tour. We have chatted about the possibility of grabbing samples from every single song and trying to create a song out of them.

That’s as meta as it gets.

Paddy: Reader’s Digest condensed Pitch Black – but they’d have to be in song order from every album order, for the trainspotter completists.