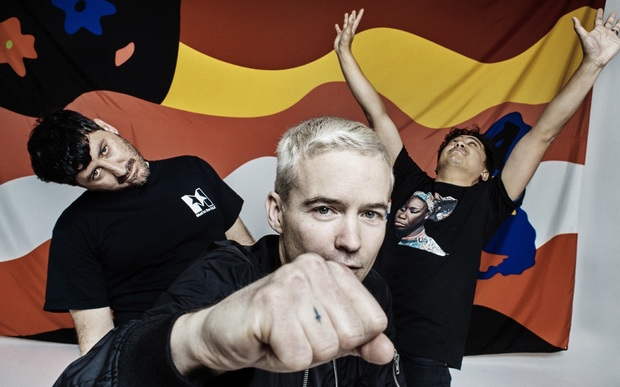 In a 1985 essay, Canadian composer and media artist John Oswald introduced the concept of ‘Plunderphonics’, a word he coined for a collage of audio recordings, repurposed and reworked as a whole new composition.

The Avalanches took this idea of musical montaging to its nth degree on their 2000 debut Since I Left You, a sample-heavy offering that didn’t reach UK and US audiences until 2001 due to sample clearance issues.

In the 16 years since that release, the Melbourne-based band have been mostly silent. But that all changed last month when they released a long-awaited follow-up LP, Wildflower.

Tony Di Blasi talks to RNZ Music's Sam Wicks about why it's taken so long, the challenges of using sampled material, and what's changed since they made thier debut all those years ago.

Is sample clearance more of a minefield now than it was 16 years ago?

In a lot of ways people have become a lot more accepting of it. Back then you’d have people go, “I don’t want my song used for this,” because they didn’t quite understand what sampling was about. Now they’re more accommodating and more willing to let you use their samples.

Can you introduce Pat Shanahan, your LA contact, who cleared the samples on both Avalanches albums?

She’s an incredibly interesting lady; such a lovely lady. She used to work for Island Records in the ’70s ... She doesn’t have a legal background, but she’s obviously got a good business sense and sense of the legalities of music. And just a million different contacts.

[Pat] ... got more work as hip-hop got bigger. She’s worked with so many people and she said that for many years there were just two ladies about her age doing it – her and this other lady – and they were clearing all the gangsta rap and all the big hip hop of the time. These two middle-aged women.

I understand that the sample you used of Kew High School in Melbourne singing ‘Come Together’ by The Beatles – which you’ve repurposed for the song ‘The Noisy Eater’ – was maybe the hardest of the bunch to clear. You got it by a letter that you wrote to Sir Paul McCartney and Yoko Ono. Can you tell me about the wording of that letter?

What happens with Beatles stuff is you go to them and it’s just an automatic “no” from their people. So we had a couple of contacts; one that could get a letter to Yoko Ono and one to Paul McCartney. We just wrote this honest, heartfelt letter about [how] we’d never try to do this if it was an actual Beatles sample. We explained a bit of the journey we’ve been through and how hard it’s been and [that] we’re in it for the art, we’re not in it to exploit things. There was quite a bit of begging in there!

With Yoko, we talked about John [Lennon] and how much we loved her work and his work and everything like that. With Paul, it was more catered to him. I guess it was from the heart; it just read like that because both of them got the letter and said, “OK, we’ll do it”. So it worked.

Sam: Guns N’ Roses’ Chinese Democracy was started in 1994 and released 14 years later, did you ever think about that record while you were creating  Wildflower?

Tony Di Blasi: We did take inspiration from Chinese Democracy because it seemed to be a bit of a joke. We kind of self-deprecatingly would say this is Australian Democracy. We were like, “Well, it can’t be as bad as that, can it?” Maybe [it was] to give ourselves a little kick up the butt to get it going and finish it after all.

You beat Axl by two years.

We’re pretty proud of that.

Although I don’t know if the budget of Wildflower was sitting at Chinese Democracy levels.

I heard it was pretty full-on and I heard he had a guy called – was it Buckethead or something?

Yup, he plays with a KFC bucket on his head.

Yeah, so I mean if you’ve got a guy with a bloody bucket of KFC on his head, then you’re probably in bad shape.

He allegedly sleeps in a chicken coop in the studio. I kid you not.

Our antics weren’t anywhere near that kind of amazingness.

There were plenty of antics. It was just lots of comings and goings with band members and letting loose with partying and things like that. It was an interesting time of my life and I’m kind of glad it’s over.

We didn’t want to do something exactly like Since I Left You, so it did take a lot of time to try and find the direction that we were going for. We started off doing this almost My Bloody Valentine-y drone crossed with Beach Boys kind of music. Then we just wrote a whole heap of that for years and were just like, “It’s a little bit too sad and a bit too melancholy”.

So we got back to the sampling. And in all honesty, it does take time to put this [type of music] together. I guess when you’re using samples, you’re mixing and matching from all these different sources so it’s like this giant jigsaw puzzle that you’re just trying to find the right piece to.

I think this record does sound different to Since I Left You, but it also retains a lot of the same Avalanche-y feelings in the song structure and everything.

Second-hand shops were a rich source of old vinyl when you were piecing together the jigsaw that was Since I Left You. How would you say your sample palette has changed or expanded since then given that digital digging is part of the equation?

There just seemed to be a period in Melbourne op shops where back in the day you could pick up some great records. Then there just became this massive culture of people opening up second-hand stores and selling records; it was almost like they’d have people go through and pick up all the best bits of vinyl from the op shops [for 50 cents] and then sell them on for like $20-$30. So in that way, the sources of vinyl were getting a bit limited.

Then with the internet you could just search and go down the rabbit hole of so many different blogs and find such great, interesting music to sample. We kind of started doing that and even using YouTube. So I guess it’s just the ever-changing world and you’ve got to embrace it. We definitely did incorporate that into the new record.

You’ve got an impressive line-up of artists who have lent their voices to Wildflower. Some made the cut, some didn’t. We’re talking about Warren Ellis, the Silver Jews’ David Berman, Danny Brown, Biz Markie, MF Doom; even voices that didn’t make the cut, like Connan Mockasin and Luke Steele.

Do you think about those voices as sample source material in a way? Like they’re other colours to work with?

Definitely. I think when we choose the artists we wanted to work with, we had the songs in mind and we definitely thought their voices would suit those songs. And even when we got their recordings back, we did mess around with them a lot and treat them like they were samples. We don’t just lay it all out there as we got it and go, “OK, well that’s what they want to do”. It’s always, “What can we do? Can we chop it up here, can we loop it here?” etc. So we definitely did think of them as samples when we got the stems back.

And I’m guessing there was a tacit agreement in place that they knew that whatever they handed over to you would be chopped and changed to fit?

Yeah, I’m pretty sure that most of them know the way we work. We did have a really good working relationship with a lot of the artists that we did have on the record. We ended up becoming pretty good friends with Jonathan Donahue from Mercury Rev.

By [The Avalanches’] Robbie Chater’s estimation, some 3,500 vinyl samples were used to build your debut. What is in the pot this time?

It’s hard to tell. I think if you cut up every little sound, every little hi-hat, snare or sound of a can being crushed, there’d be thousands.

The Avalanches are playing at Auckland City Limits on Saturday, March 3rd at 6.45pm on the Aroha stage.