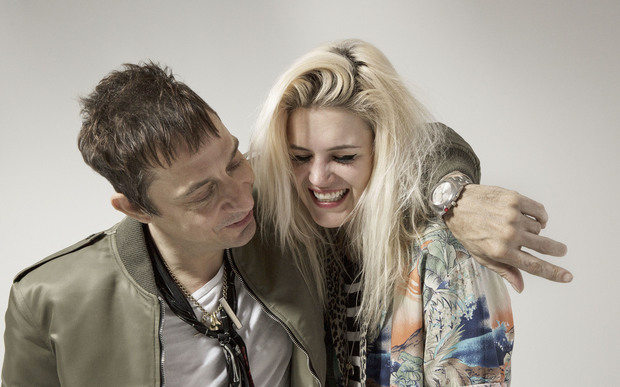 The most recent is Ash & Ice, which The Kills were touring when they played Auckland on Thursday night, their numbers bolstered by two additional players.

Ash & Ice has only been out for a little over seven weeks now. Is it when you're on the road that you really get your head around these 13 new songs and where you can go with them?

Jamie: In a sense. I love being in the studio and making songs and seeing them grow and take on a life of their own. When we close the lid on the last mix, it's kind of done for me, you know? It's a really sad day when it's over, but coming out on the road breathes a totally different life into these things. Before you know it, songs start shining brighter than you thought they would.

Alison: I think they're still coming into their own; they're still changing all the time. It's really exciting to play them. I haven't heard the record in a while. We spent so much time making it and mixing it and mastering it, and now they're live songs to me.

Jamie: I always liked the idea of recording a record, then going out on tour, then going back into the studio and recording it again.

If you were to finish this tour and then go in the studio and smash out a live in-studio recording of Ash & Ice, would it be superior to the original?

Jamie: I haven't thought of it in that sort of way, but I guess my desire to do it would suggest that I think there's going to be better angles to it. Personally I think they're two different animals – the studio Kills and the live Kills. In my head, I've always wanted to be Massive Attack in the studio and I wanted to be The Stooges on stage. I think out of all the bands there are in the whole wide world, we're achieving that more than most.

Would it be fair to say the latest set is the closest you've come to doing a Massive Attack in the studio?

Jamie: Probably, because the one thing that uncuffed my hands was learning how to record [and use] Pro Tools. When you've got that language, you don't need an interpreter anymore; you can just do it yourself. It's been a real godsend for me.

You have a lot going on individually in both your musical and artistic worlds. What is it about this relationship that makes you keep coming back to it?

Alison: It's like home. It's still incredibly exciting and inspiring, and we still have so many ideas. We love to do this; that's what it is.

Jamie: We don't ever really go back to it; it's just always there. That's the backbone and everything else is like a little tangent or a holiday now and again. But The Kills never will be something that we move in and out of. It's not like you have a love life and a social life and a Kills life. Kills is life and everything works around that.

But it's not a monogamous relationship, right? For example, when Alison was making the last Dead Weather album, that freed you up to do the Tran-Siberian railway journey. What did you bring of that experience – that famed rail passage – to the record?

Jamie: One thing I was never totally happy with was the standard of my lyric writing and the older I got, the harder I found it was. You can't write with a youthful innocence. A lot of things I wrote when I was in my twenties were like clichés, but I just didn't want to write any rock 'n' roll clichés anymore.

I felt like there were writers that I loved like Steven Berkoff that had managed to make really great poetry that sounded good and honest. It's poetic, but it wasn't bullshit and it wasn't clichéd. That was what my Trans-Siberian journey was about really: it was just trying to find a writing style that I liked. I always left lyrics to the last minute and I wanted to take it more seriously.

The Kills finished off the record at Electric Ladyland Studios in New York City. Was there any spirit of Jimi Hendrix that found itself in the songs, or did you feel that aura yourself?

Alison: I don't know. I thought about him while I was there because he built that place. It's got a very cool spaceship vibe; it feels very of the time.

Jamie: He wanted the whole studio to look like a spaceship so there's these crazy '70s psychedelic murals. In the main room where we were, it's like a sort of spaceship with a Lolita-type character. And then the whole of the control room mimics the mural. It's quite crazy. But for the big unveiling of the murals, he was like 'I don't like them' so they hid them away for a long time. Then he lost interest in the studio and then he died. But everyone there is channelling him.

You guys used to stay at the Chelsea Hotel in New York. So if you’re staying there or booking sessions at Electric Ladyland, is any of it with the mind to channel the same sort of ghosts that you’re talking about.

Jamie: It’s a difficult one because we’ve often talked about being anti-nostalgic. I think you have to be, especially in a guitar band. You don’t want to fall into the trap of being retro.

But you can stand of the shoulders of giants.

Jamie: We've been in this band for 15 years or so and I've been doing music for a long time before that as well. It's not facing up to the harsh reality of things that make you carry on that long, it's the romance and the mystery and all those stories. These kind of romantic aspirations, I suppose. That's why we like to embrace them and envelope ourselves in these old rock 'n' roll histories.

How do you do that?

Jamie: Just book a room in the Chelsea and lie on the bed!