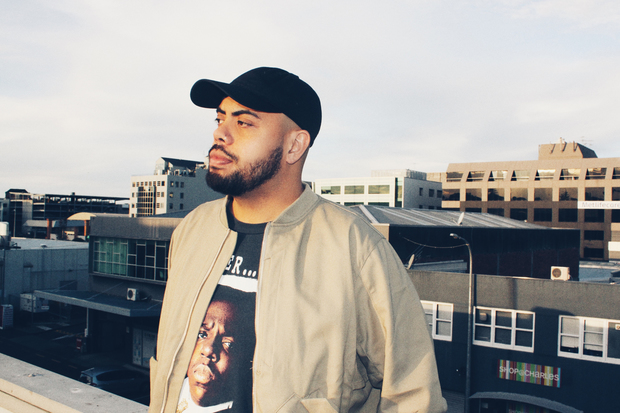 With production handled by Patrick Hawkins, Matt Miller, Fire & Ice and Nick “41” Maclaren, PNC’s latest release, The Luke Vailima EP, is bookended by ‘Sonny Bill 04’ and ‘Jonah 95’, cuts that throw back to the years that the preternaturally gifted Sonny Bill Williams and Jonah Lomu made their grand entrances.

It’s not the first time PNC has paid tribute to SBW. When Sonny Bill switched codes to trade punches with Charles Tillman III in February 2012, PNC supplied his entrance music, a flip of Drake’s ‘The Motto’.

As well as being a lifelong student of rap music, PNC is a dedicated armchair sportsman who’s peppered tracks throughout his catalogue with references to sporting giants of different codes. As PNC explains, athletic feats serve as fuel for his penmanship.

This is the Luke Vailima EP. Vailima is not only a village south of Apia, but it’s also the beer of choice in the islands. It’s Samoan Breweries' biggest drop, but we’re talking about your middle names. This isn’t a reference to the beer, or the village you come from.

Nah, my mum just gave me those two middle names for whatever reason; she never really explained that to me. I think Luke was my great-grandfather and Vailima was an older person that she knew that came from [Samoa].

The drinking and partying aspect of Vailima helps as well. Like whenever I go through customs, the Islander dudes always crack up at me. They see my middle name and they're like 'this guy'.

The EP is bookended by two sporting themed tracks – Sonny Bill 04 and Jonah 95. It's not the first time you've soundtracked Sonny Bill's sporting prowess; you penned the SBW Theme, which Sonny walked out to when he fought Clarence Tillman III in 2012.

Did he actually commission that song from you?

We've got a mutual friend and he asked me through Sonny. He wanted a remix of The Motto, the Drake song – but personalised. That's how it went down.

We met a few times. He gave us tickets to the boxing and we went and watched it.

Before that fight, you tweeted the words “Ringside status. Check SBW's intro music”. You were ringside for that fight? That's genuinely a Rick Ross situation.

Yeah, it is. It was like Pac at the Tyson fight.

That must have been the biggest soundsystem you ever heard your music on.

Yeah and they kept looping it. It was crack-up because they played it and then he knocked a guy out in like thirty seconds or something. Then they just had it on loop.

Sports metaphors are often used in rap music; basketball ones in particular. You're a Boston Celtics fan and there's been a tonne of times that you've made reference to them in your music.

Does it feel particularly authentic when you're using Rugby Union or League references rather than basketball metaphors in music?

Definitely. I try to relate to our own culture as much as I can; it's cool when I can pay homage to that and slide those kind of lines in. That's all the stuff I loved listening to growing up; all the rappers that would come up with a cool way of putting sports players in their rhymes and comparing themselves to them. It's cool to be able to do that in my music as well.

Yeah, I think both are mutual fans of each other.

You kind of like always really admire someone when you know you could never do what they’re doing but they’re doing it at such a high level. I almost get more inspiration from listening to sports guys and their process for how they approach their craft more so than even musicians. They really dedicate their lives to their craft, so I think it parallels really easily.

I saw a fan on your Facebook page calling for a Cullen 97 track. There could be a whole series here.

I could forever be doing this. It's kind of funny listening to what guys want to hear or what athlete they want represented.

Athletes in high impact sports begin to flame out as they hit their thirties. Sonny Bill debuted as an 18-year-old; Jonah Lomu was 20 when he lit the rugby world on fire at the '95 World Cup.

You close out the song Jonah 95 with the words "back full of spite / tell these cats on the mic that I'm still Jonah 95". You're 32 years old now – are you bar for bar in the best shape of your life?

Lyrically, I think I hit another level. That's why I've been putting out these long raps because I have a hunger and passion and every bar is something special. I'm just as inspired as or more inspired than I was. I'm operating higher than I ever have. People will say 'where have you been' - then that fuels me. I haven't gone anywhere, y’know? I'm still doing it.

Jonah in '95 probably had the best run a rugby player ever had of all time.

He walked over people.

Lyrically, I feel like I'm trying to be him running over Mike Catt. That was the line that nobody really got: I was like, "tell these cats on the mic that I'm still Jonah 95", and it was Mike Catt that Jonah ran over.

I can always parallel sports with music. When you hear it, I want my music and the lyrics to give the listener that type of feeling of that moment. Or Sonny Bill 04: I feel like I've just been winning ever since then. It's been good ever since then. But I feel like when I'm writing those sort of blackout 40 to 80-bar raps, I'm just trying to be the best rapper I can be. So it just makes sense to me to reference those guys that I think are the best.