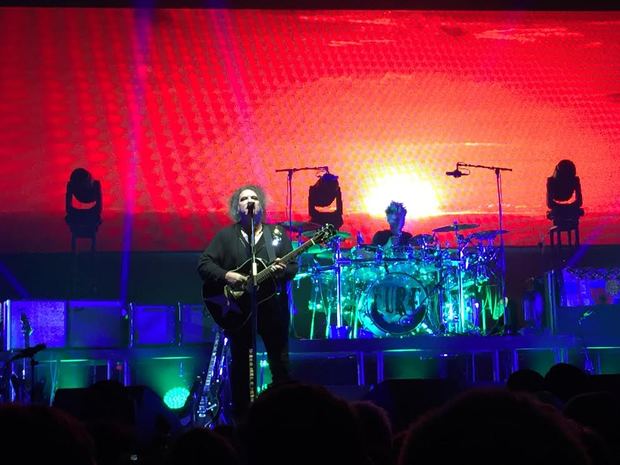 I think The Cure were trying to please everybody. Whether you're a fan of the bouncier side of their back catalogue like 'Friday I'm in Love', the luxuriously dreamy 'Painsong', the absurd and playful 'Why Can't I Be You?' or (my favourite) the heavy and murky era of Pornography, there was absolutely something for everybody during their exhaustive (and exhausting, my dancing feet are killing me) set last night which clocked in at over three hours long with four encores. The arena was packed, the seated punters stood at times to dance in the aisles, and everybody was smiling.

A squizz at recent Cure setlists have shown the group have increasingly been throwing in the odd curveball into their shows like the wonderfully sparkling 'The Exploding Boy' -  the b-side to 1985 single 'In Between Days', and sparse, chilly pieces 'M' and 'Other Voices' from moody companion albums Seventeen Seconds and Faith, all of which I was hoping they would treat their New Zealand audience to, but this wasn't the case.

The three opening songs ('Plainsong', 'Pictures of You' and 'Closedown') from 1989's Disintegration set a lush and gloomy tone. Robert Smith resplendent in a black shirt with sparkly bedazzled accents and his trademark smear of Ruby Woo lipstick stood still while bass player Simon Gallup, who still dresses exactly the same as he did in 1981 constantly stalked and pranced the stage with an energy that didn't lapse once for the show's duration.

The group moved through to pop confection 'High', the brooding 'A Night Like This' (no saxophone, though) the excellent 'Push from 1985's The Head on the Door, the slow dirge of 'Prayers for Rain', the light and breezy 'The Caterpillar', the wistful 'From the Edge of the Deep Green Sea' and 'Lovesong', which the crowd enthusiastically sang along to. "I will always love you, Robert!" I heard someone call out. 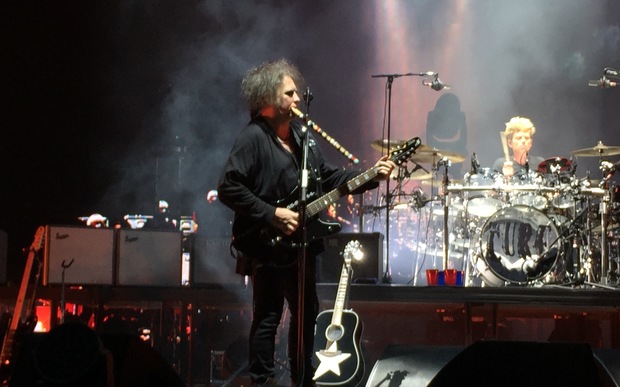 The first encore offered 'Burn' from The Crow soundtrack and then the wonderful 'One Hundred Years', with the killer opening line "It doesn’t matter if we all die." Easily the highlight of the show for me and it's great they can still play this older material convincingly. 'A Forest' (complete with a visual backdrop which mirrored the 7" single's cover) had everyone singing along and I was impressed by Smith's ability to sustain the "again and again and again" refrain without losing his puff.

I wonder who was responsible for the bizarre and cheesy background visuals which looked like Microsoft screen savers – a sunset here, a burning candle there. But as soon as the band launched into 'One Hundred Years', the visuals abruptly shifted to stark, hard images of prisoners of war. Such a sharp contrast and a perfect companion to that song. The light show was sometimes blindingly harsh, with bright shards of light.

The band is great and have these songs down pat. Jason Cooper on drums and Gallup on bass were loud. Roger O'Donnell on keyboards could have been louder. Reeves Gabrel was on second guitar and at one point, a happy looking Smith played the recorder. He apologised for not talking much between songs, saying he'd thought of "engaging, illuminating and humourous stories" but he stuck to the songs.

The second encore started with 'Shake Dog Shake' from underrated album The Top, moved through to the hypnotically stunning 'Fascination Street', 'Never Enough', and the daggy 'Wrong Number'. The third gave us 'Lullaby', 'Hot Hot Hot', 'The Walk', 'Close to Me' and the final encore included the truly terrible 'Why Can't I Be You', Love Cats' and 'Play School pop' of 'Let's Go to Bed', ending with a somewhat slowed down classic 'Boys Don't Cry', which saw O'Donnell stepping away from his keyboard to bang on a tambourine. And then it was over. Smith smiled, said he hopes to see us again and shyly exited the stage.