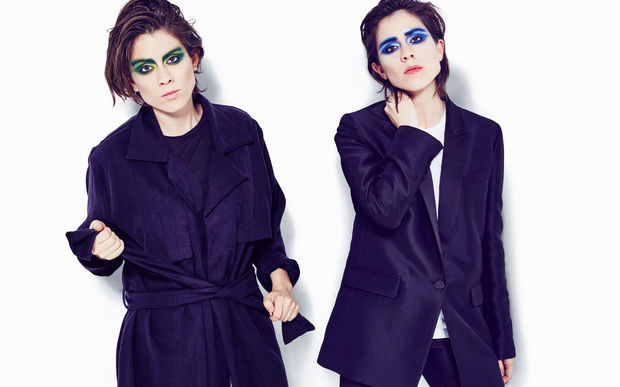 Tegan and Sara have kept their indie pop in the family over a near two-decade stretch and across eight studio albums. On their eighth LP, the identical twin sisters have signalled a big change in direction, trading guitars for arena-scaled pop. To achieve the necessary studio sheen, they teamed with Greg Kurstin, a producer and songwriter responsible for buffing radio-friendly recordings from the likes of Sia, Ellie Goulding and Britney Spears.

"I don't feel like anyone is telling us, 'Oh, now that you've made a pop record you have to have dancers or you have to have more choreography'," Sara explains. "I think that we've introduced these elements because we want to be challenged."

Sara says the change in sound has challenged them in unexpected ways. "After so many years of performing, it's having to figure out what to do with your body after 17 years holding a guitar. It's just allowing myself to be more open with the audience and not have this barrier between us – it's felt really intimate."

The twins will turn 37 this year – it's a ripe old age to be entering the pop market. But it also brings a resilience and confidence that someone in their 20s might miss. Sara is quick to point out that it's the pop music of the '80s – Kate Bush, Madonna and Cyndi Lauper – rather than the '90s that has inspired them.

"The Backstreet Boys didn't represent me, rock music and punk music did. Pop music to me represented gender and sexuality that didn't line up with my own.

"I think there's a shift, musically, socially and culturally right now that is being picked up and represented more quickly in pop music – and that draws me to it."

The songs on this album are resonating with a wider community than ever. Are we getting to a point where the mainstream is able to identify with non-mainstream experiences?

"I think the messaging of the band is definitely accepted by the mainstream in a way that it wasn't at the beginning of our career. But we're still living in a time where a song like 'Boyfriend' can feel really, really subversive. We just did a TV show in Canada and I was singing to a sea of 14-18 year olds, who looked to me like a pretty heteronormative audience. I was feeling really gay. I still think the message is pretty left of centre."

Fellow Canadian and long-time fan Sarin Moddle talks to Sara about the Quin sisters' pop turn on Love You to Death at the audio link above.