There are dozens of Māori musical instruments, or taonga pūoro, in museums far from home, which have been unplayed, and hardly touched, for a couple of hundred years.

Taonga pūoro researcher, player and crafter Alistair Fraser is about to change that. He has already done one research trip, during which he was permitted to play and record the collection held at Cambridge University.

Many of the instruments were bathed in arsenic and cyanide to preserve them. “I have to be careful not to do this too much. I’m putting them in my mouth, I’m breathing through them. I’ve got to be careful that when I breathe in, I don’t suck in any old dust.”

Alistair approaches the instruments with a deep sense of respect. “If I get a bad feeling from thinking about playing the instrument, then I tend not to. I’ve really only had that happen with a kōauau kōiwi [tangata] -   a human bone. And actually I played it anyway - and afterwards it felt good.”

Which bone were they usually made from? “Femur leg bones seem to be the bone most commonly used in the past. They're the largest so maybe that why they were favoured. Although humerus arm bones also work, from the modern kōauau kōiwi tangata I've played.”

Was it likely to be fashioned from friend or foe? ” Both. I've heard and read stories of these being made to honour an individual or to taunt an enemy that their friend or relatives kōiwi was being used by the opposition.

“They’re from various iwi around New Zealand, and so the voices that are being produced when I’m playing them, I feel they belong to those people - not me. I really feel like those voices have to be heard. They’re mostly not on display - they’re unseen, and unheard. And to me, that’s quite sad.” 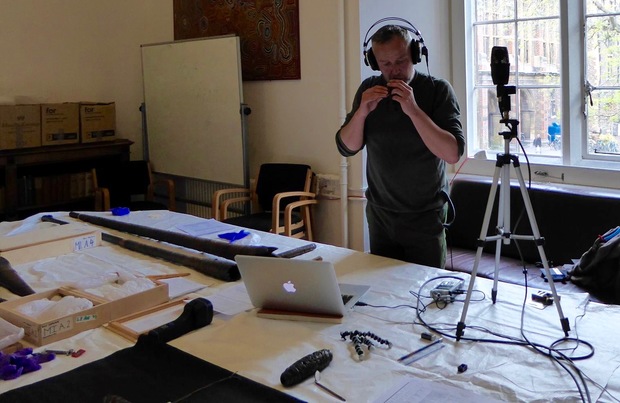 Hear more about Alistair Fraser's research in the audio link above, and a previous interview with Alistair on Sunday Morning with Wallace Chapman here.

You can contribute to Alistair's research fund here