From Onehunga to LA: SmokeyGotBeatz

Onehunga-based producer SmokeyGotBeatz has been spending more time in LA than NZ recently, making beats for some of rap's most influential names. Sam Wicks talks to Smokey and his manager Andy Murnane about their beat-exporting enterprise. 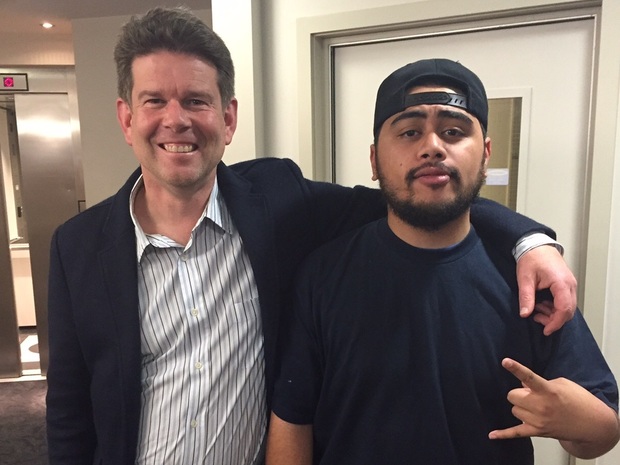 When you think about America's West Coast hip-hop scene and stars such as Kendrick Lamar,  Xhibit and Jay Rock, the Auckland suburb of Onehunga doesn't generally spring to mind. But beat maker, producer and Onehunga native, SmokeyGotBeatz has been getting a whole lot of attention from some of LA's hip-hop heavyweights.

Smokey and his manager Andy Murnane caught up with RNZ's Sam Wicks to talk about their success in the birthplace of gangsta rap.

Producer SmokeyGotBeatz is part of an Onehunga-based hip-hop collective with rappers Spycc & INF. This year, though, he’s been spending more time in LA than AK; after linking with Dawn Raid Entertainment’s Andy Murnane and joining his 1979 Management roster, Smokey has been placing beats with some of West Coast rap’s most influential names.

This includes getting a beat picked up by Top Dawg Entertainment’s Jay Rock, who chose one of his instrumentals for a song he would title ‘Parental Advisory’, featuring TDE label mate Kendrick Lamar. As Smokey explains, this was a connection made before he joined forces with Murnane.

“Jay Rock posted up a tweet to one of the in-house producers at TDE asking for some beats … I saw the tweet, so I replied to Jay Rock. I was like, ‘Yo, can I send some beats?’, and he was like, ‘Yeah’, so he gave me the email.

“Since then I’ve always been sending him beats, and then one day he asked me for the files for a particular beat, and I was like, ‘Whoa, do I have a placement?’ ... Next thing I know I’m getting calls from the heads of TDE about paperwork, and then the song got released – that’s basically what happened.”

Ahead of their latest West Coast run, Smokey and Murnane talk to Music 101's Sam Wicks about their AK-LA beat exporting enterprise.