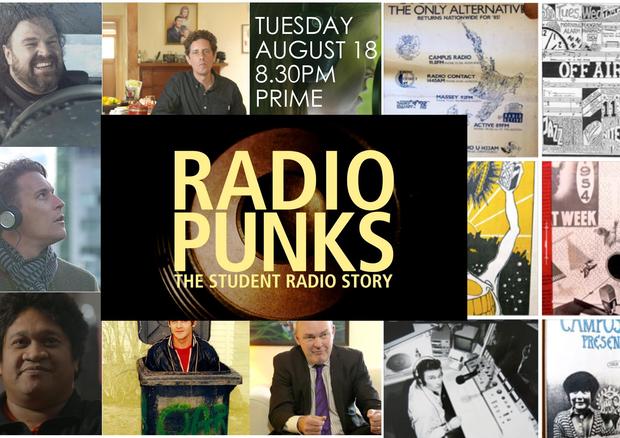 As student radio nears its 50th anniversary, the middle-aged desire to reflect and be nostalgic is a natural tendency, but it is not a sentiment that sits comfortably with a movement that prides itself on not-selling out, growing old or becoming the establishment.

It’s a tension that Paul Casserly has deftly navigated in his new television documentary, Radio Punks: The Student Radio Story. The story looks to chart the rich history of student radio, which began as an Auckland University capping stunt in 1969.

The former bFM programme director, half of Strawpeople, and Eating Media Lunch director is a life-long student radio fan, so the responsibility of distilling the story covering all of New Zealand's campus stations was not lost over the two years it took to make Radio Punks.

“Part of my fear of doing this initially, was that it was a complicated and huge story. There was so many people that needed to be represented. To squeeze that into 45 minutes and put it on TV is a tricky business,” he says.

“I think what I’ve done with this is try to capture the flavour of what student radio has given to New Zealand.”

Casserly says it was weirdly familiar revisiting these places. Some things have changed, but many things haven’t.

“It was interesting for me to go to Radio 1 in Dunedin, which I hadn’t spent a lot of time at. That really felt to me like bFM in the old days. It was a great feeling place and it’s really connected with the university as well now.

“They went through a tough time where they nearly went under and that’s part of the story that we tell as well.”

Casserly says that student radio has had to deal with a whole lot of changes, especially with the proliferation of stations. Back in his day, there weren’t any alternative stations specialising in different genres.

“[Radio] used to be kind of the record store for the country. Now, it’s not that. But it still is relevant, so it’s having to find its way again which it seems to be doing.”