What a Terrible World, What a Beautiful World by The Decemberists

Nick Bollinger reviews an unusually concept-free set from The Decemberists. 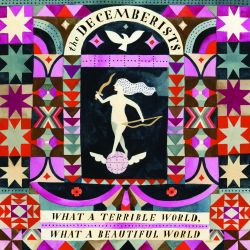 With their reputation for extended song cycles like The Crane Wife and The Hazards Of Love, The Decemberists’ first album in four years surprises for its lack of an overarching storyline or consistent musical style. But after an 80s soul blast and a 60s pop pastiche, things settle into a familiar folk-rock mode for a bunch of concise personal songs like “12/17/12”, in which frontman Colin Meloy addresses the dilemma of bringing a new child into a violent and terrifying world, and funnier ones like ‘The Singer Addresses His Audience’ or the uncharacteristically lusty ‘Philomena’.