Ladi6 live at the Powerstation

Ladi6 might be able to pack out venues here, but she admits winning crowds over on her recent US tour was a challenge.

In New Zealand, the soul and hip hop songstress, otherwise known as Karoline Tamati, has a large and dedicated following. Her third studio album, Automatic, is up for four New Zealand Music Awards, including album of the year.

Touring the US earlier this year with her band – made up of partner and main producer Parks, drummer Julien Dyne and keyboardist Brandon Haru – was a different story.

“The American tour was trying to convince people that didn't come to see us that we were something worth listening to,” she said.

“But actually it was also exciting and challenging at the same time because you really get that instant gratification when you win them over at the end and they all stay and want to talk to you and take selfies for Instagram.”

Other challenges included being robbed of all their gear in Oakland. “We still had five more shows to go so we had to beg and borrow gear.

“Luckily we had loads of awesome friends that happened to live over there, and are doing music, so we got the gear almost immediately.”

Depleted of energy, having just stepped off stage, she sits at the back of the Powerstation, where she has just performed the Auckland leg of their album release tour.

“I'm really buzzing out my tour manager because she hasn't tour managed me before, so she’s not aware of how humongous my family is.

“My first show in Papakura, she was like 'Really? Are you sure you're her cousin'? And I'm like, ‘Yeah, no ,that's another one, there are many of them’.” 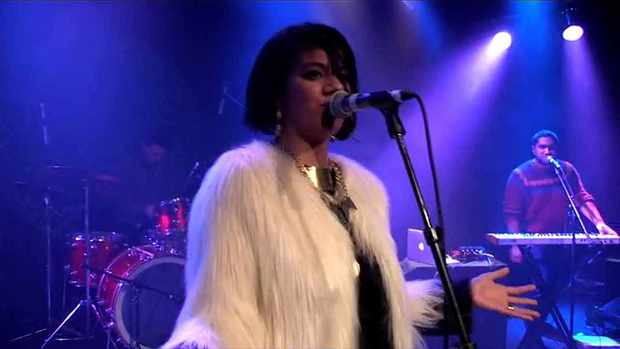 An additional member to the Ladi6 crew is Tamati and Park’s 10-year-old son Philly, who comes on the road with them.

“He doesn't wanna be left behind you know. We say to him: ‘You know, I think you should go to school because, you know, you're not really good at organising yourself’, or whatever, and he’s like, ‘No way, I'm coming with you’ so, [she shrugs] he has to come’.

“Absolutely there's challenges and it's always about figuring out who's going to look after him in each different territory we're in.

Her and Parks aren’t the only Kiwi musicians taking their kids on tour and finding a way to make it work.

“Like Phoenix Foundation, they go overseas and I pop around, see them, have picnics, they've got all their kids; Electric Wire Hustle had all their kids in Berlin at one stage so it's not unusual for New Zealanders to roll - like their entourage are their infants, you know, and their Mrs," she says.

“It's just the Kiwi way I suppose.”

Though she’s sometimes compared with Erykah Badu, Tamati says she grew up a “grunge kid”. “I was into Smashing Pumpkins and Morcheeba, trip hop, whatever that fricken was back then ... And my sister was really into soul, and my other sister was really into hip hop and I think it's because of them that I didn't want to get into it, and they really loved Erykah.”

When she saw Badu, “everything” about the singer resonated with her. “I just completely fell in love with everything that she's doing and really felt that full force that people compare me to her, so yeah, I love it, I can't lie.”

Performing is something she didn’t learn at school, she says. “It just literally came out the way that it did. Very organic and so I just feel at this time in my life, I just feel truly grateful.”

“It's a funny thing when it comes to performance, you really have to know yourself well and feel confident on the inside.

“I don't think that that just comes; it definitely didn't come naturally for me anyway.

“Now, I feel like I picked this, this is something that I really wanna do, this is my dream, which wasn't the way in the beginning.”