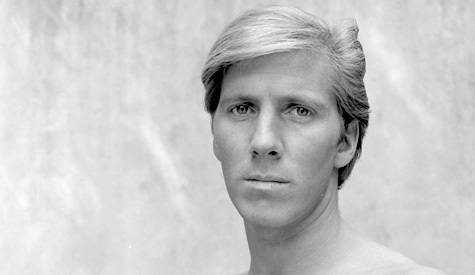 Artist: Lewis
Songs: Cool Night In Paris, My Whole Life, Even Rainbows Turned Blue, Summer's Moon, Bon Voyage, So Be In Love With Me, Don't Stop It Now, Where Did My Love Go Away
Composer: R.Wulff
Album: L'Amour, Romantic Times
Label: Light In the Attic

One day in 1983, a mysterious blonde man with piercing grey eyes arrived at Los Angeles’s Music Lab Studios. Music Lab was not glamourus, but it was affordable. He had a batch of 10 songs, and simply explained that he wanted to record an album. Accompanied by his girlfriend, he was well-dressed and apparently well-to-do. He spoke softly, giving different explanations – he was in fashion, or perhaps finance. More ominously, that he had insurance issues. He went by the pseudonym Lewis, called the set L’Amour and gave the album photographer a $250 cheque that bounced. The soft-focus and shirtless cover of the album is perfect – half ridiculous novelty, half ageless beauty. Then he vanished.

Flash forward, when a chance discovery of the record in a dollar-discount bin by Canadian blogger Aaron Levin brought Lewis a 20-year late cult following. L’Amour falls into the bracket of what’s known as private press – self-released recordings, often by evangelists and eccentrics with more desire to express themselves than actual skill. But L’Amour is indelible and indescribable. Lewis’s croon is half murmured and sometimes hard to hear, but there’s something fragile about it that hits you in the gut. The whole time, he’s accompanied by Spartan guitar plucks and warm, liquid synths that come off halfway between a John Carpenter score and Angelo Badelamenti’s score for Twin Peaks.

This year, reissue label Light In The Attic remastered and reissued L’Amour. Almost as fascinating as the music , the liner notes included lost pictures from that photo shoot, and revealed that his real name was Randall Aldon Wulff. But there the trail went cold. His past and his present remained a mystery. They tried to track down Lewis for his permission to release the record – in the end, they kept the royalties from the album in an escrow account, in case he ever surfaced.

Then, a month ago, another bombshell. A second Lewis album went up on Ebay. This one, called Romantic Times, had an equally delirious 80s aesthetic. Here, Lewis stands in a white leisure suit in front of a BMV convertible AND a private jet, holding a cigar. Either life had been very good to him after L’Amour, or he had become an exceptional pretender, hiring the part. Light In The Attic were well ahead of the game. They had secured Rmantic Times months before and have now rush-released a reissue of it. Apparently recorded two years after L’Amour, the cult corners of the Internet waited with baited breath. Would it match L’Amour?

Very nearly. Romantic Times drips with romantic platitudes, but Lewis sounds more unhinged than before. His voice is up in the mix but no easier to parse a lot of the time – if anything, he sounds wrecked by drugs and heartbreak. Added saxes and synths pulsate like something off the Drive soundtrack or the modern producers who mine that sound. It’s a delusional but oddly tender vanity record, but it’s also a surpreme act of retrofuturism.

Then last month, there was a final, wonderful twist. Lewis, aka Randall Wulff, was found in Calgary. A picture surfaced of him online, looking well for his early 60s, using a cane, and visibly moved as he looked at copies of the reissued L’Amour. He thanked Light in the Attic for the attention, refused royalties and explained that he had moved on. But at Wulff’s request, the reissues won’t be repressed after the current stock run out. He’s being given the chance to slip back into obscurity, back from whence he came.

Lewis’s two records are primarily mood pieces. Reference points are tricky – Scott Walker after he went off the deep end, a more coked-out Bryan Ferry – but if you spend time with it you’re amused, then fascinated, then hooked. Even though Wulff’s been found alive and well, this is still mysterious music.