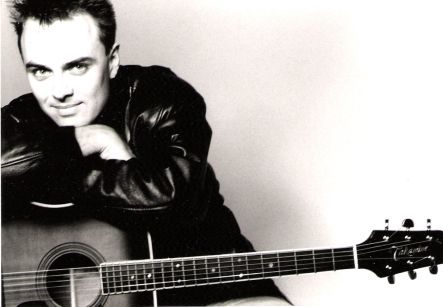 Rikki Morris from the cover of the 1990 single 'Heartbroken'. Photo: Darryl Ward.

During an intimate conversation Rikki remembers the unique talents of his late brother, Ian Morris, before we head out to a show where he tames an unruly live mix. We visit him at his new studio where he uncovers rare audio gems from half a lifetime of performing and recording. Rikki Morris is this week's guest for Musical Chairs, and he starts by showing music reporter Nick Atkinson his working space...

Rikki Morris is so much more than just a one hit wonder, though many will remember the 1988 solo smash Nobody Else for all its multi-tracked pizzazz.

Growing up in the mildly oppressive proving ground for ‘80s kiwi rock stars that was Sacred Heart College in Auckland imbued the musician and sound engineer with a healthy rebellious streak. He, and many of his peers, set out on rock’n’roll adventures around the country and then further afield.

It began behind the sound desk on tour with Th’ Dudes and DD Smash and soon enough Rikki was playing in bands like The Crocodiles and The Vibe Brigade. More recently he’s been recording and mentoring some of the country’s finest up and coming pop stars. Gin, The Checks and Finn Andrews of The Veils all made their first studio recordings with Rikki in Devonport.