Today on Musical Chairs, one of the pivotal figures from 1960s rock and roll, Max Merritt. From his late teens Max was a musician’s musician, both as a performer in his own right, as a song writer and as an arranger and backer for other stars such as Dinah Lee. Forty-five years on and still going strong, Max Merritt is based in Sydney.

Eric Frykberg caught up with him there following a hugely successful tour and gigs with the great Ray Charles and Wilson Picket.

To most New Zealanders, Max Merritt - who died overnight aged 79 - is best known for 'Slipping Away', a Kiwi anthem from the mid-1970s. But his career stretches all the way back to the very beginning of rock and roll in New Zealand.

In 1975 Max Merritt and The Meteors were struggling in London and playing the same venues as the then-emerging punk bands. They'd been signed to the fledgling Arista label but the A Little Easier album met with little success. The band had been largely forgotten in Australia and New Zealand when a second single, 'Slipping Away', was released off the album, which would give Max Merritt the biggest hit of his career, 16 years after his first record.

Maxwell James Merritt was born in Christchurch on April 30, 1941. At age 12 he was taking guitar lessons with no great enthusiasm, impatient to replicate the hit songs of the day without having to endure endless renditions of 'Home On The Range'. The boredom was sorted when his teacher, a second-hand dealer, was imprisoned for receiving stolen property.

Bitten by the rock and roll bug

Leaving school at 15 to serve as an apprentice bricklayer with his father, his interest in the guitar waned until 1956 when he heard 'Rock Around The Clock', 'Heartbreak Hotel', 'Be Bop A Lula' etc. He purchased an electric guitar and with cousin Tony Merritt on guitar and Davey Burns on drums, they attempted to play Elvis, Haley, Little Richard. It didn't work out, but Max had the bug. 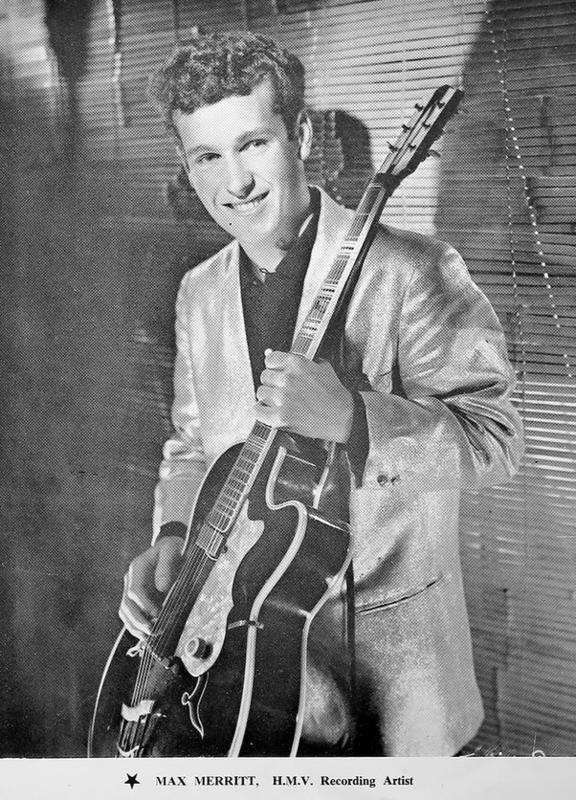 In 1957 Christchurch authorities were alarmed about a growing number of incidents associated with rock and roll. A particular worry was the hundreds of teens who congregated every Sunday afternoon in The Square. A meeting of concerned citizens was arranged by theatre manager Trevor King, which was attended by Jim and Ilene Merritt and their 15-year old son, Max. The result was The Teenage Club, held 2pm to 6pm every Sunday and managed by King and the Merritts, which is where Max Merritt and the Meteors evolved.

Merritt remembers "we were evicted after complaints about noise and kids hanging around outside…. It was a bit like Footloose - all the elders and church folk were agin us!"

Despite the opposition, the club flourished - at its peak, it boasted 1200 members and by the end of 1957 it was attracting weekly crowds of 800 jiving teenagers. Max Merritt became a local legend and a reluctant spokesperson for the rock and roll generation. 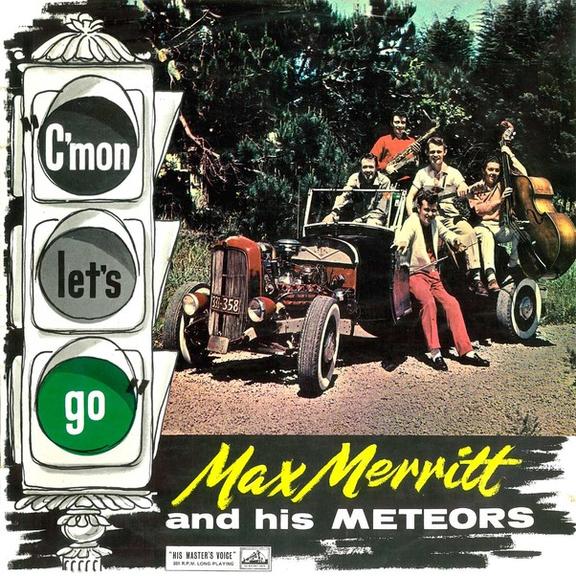 Max Merritt and The Meteors' 1960 album C'mon Let's Go. Issued by HMV, it was recorded at Christchurch's 3YA radio studio Photo: Courtesy AudioCulture

The Meteors arrived in Auckland in March 1963 to kickstart a new venue, The Top 20. The line-up was Merritt and Peter Williams (guitars, vocals), Billy Karaitiana AKA Billy Kristian (bass) and Johnny Dick (drums); Kristian was replaced by Mike Angland after a quick trip to Sydney in September to appear on the Sheb Wooley tour.

Two 1964 EPs in particular, Giddy Up Max! and Good Golly Max Merritt!, display a raunchy band, suitably rough around the edges, which had successfully made the transition from 1950s rock and roll via Shadows-style instrumentals to the beat boom.

"The Top 20 was open five or six nights a week," Merritt remembers, "and the weekend hours were killers - 6pm to 2am, with only three minutes off every hour. [Aussie saxophonist, arranger and producer, Jimmy] Sloggett would join us around midnight so the last couple of sets were always hot. Sloggett provided the whiskey and Mikey Leyton, the English singer who worked at the drinks counter, provided the amphetamines. Man, by 2am we were bouncing off the walls!'' 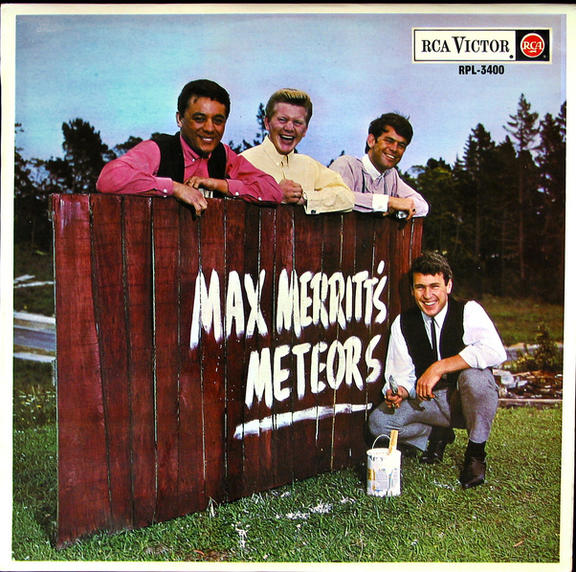 1965 was divided between Sydney and Auckland, where they recorded the Max Merritt's Meteors album for RCA Records, not Viking. Looking back, Merritt says, "We didn't make a cent out of Viking. I don't even recall receiving a fee for the recording sessions behind Dinah and Tommy and them, and we certainly never received a royalty cheque."

In Sydney top Aussie band Billy Thorpe and the Aztecs filched The Meteors' rhythm section. Max was convinced that it was a deliberate attempt to sabotage the band. "We were starting to get noticed - it was a great band and Ted and Johnny held it down, a great rhythm section. I've always believed that Thorpie and John Harrigan (Thorpe's manager) were concerned about our growing popularity."

When bassist Billy Kristian and drummer Jimmy Hill of The Invaders heard that The Meteors required a rhythm section, they offered their services, leading to The Invaders' demise. Hill didn't last long, departing on the eve of a national tour supporting The Rolling Stones after a punch up with Merritt. Bill Fleming was hurriedly pulled in and at the end of the tour Bruno Lawrence was recruited.

Lawrence shared Merritt's love of black American music and soul music soon dominated the repertoire and in July 1966 a double-sided single, 'Shake'/'I Can't Help Myself' (covers of Sam Cooke and the Four Tops respectively) indicated the band's new direction and provided the band with their first Australian chart entry.

During a New Zealand tour shortly after, The Meteors recorded what became Max's theme song. 'Fannie Mae' was a raw blues and Stateside hit for Buster Brown but a brass-driven rocker as arranged by John Charles at HMV's Wellington studio.

Back in Sydney, it was a hard graft. Graham Dent wanted the band to move onto the lucrative cabaret circuit, resisted by Merritt, and in the new year he secured the band a Pacific cruise.

Billy Kristian, a teetotaller, had grown tired of it, and Peter Williams, his role diminishing, had his own plans. Both handed in their notice on the eve of the cruise. A quintet took to the high seas and, well, it was one alcohol-fuelled party. During the Auckland stopover Bruno took the partying ashore and didn't make it back. Max played drums on the final leg to Sydney, where Kristian and Williams formally departed. Dent, in frustration, resigned as manager.

A new line-up based themselves in Melbourne but just weeks after the shift south, on June 24, 1967, the band was involved in a head-on collision. All but Yuk received serious injuries - Max lost his right eye, Bertles and drummer Stewie Speer both received badly broken legs, among other injuries. It would be 1968 before Max Merritt and The Meteors returned to the stage. But when they did, their fortunes changed.

After their medical ordeals, it was perhaps little wonder that the group earned a reputation as a bunch of outlaws. They took to wearing leather, denim and T-shirts, swizzled alcohol on-stage and didn't mind their language.

And they looked ... odd. Merritt kept his hair close-cropped at a time when long hair was a mission statement; Speer, a giant of a man, prematurely grey, looking even older than his 40 years; Bertles looked and sounded like what he was - a jazz hipster; and Yuk Harrison looked just like what he was - trouble. 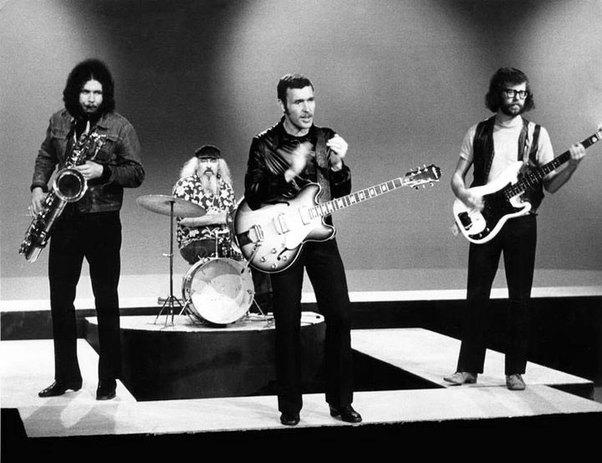 In 1968 the "musicians' band" started attracting sell-out crowds and by the end of the year they were reputedly Australia's highest-paid band. They certainly had the largest repertoire; again reputedly, they could call on 200 songs at any given time, mostly covers but with an increasing number of originals.

The UK and that song

'Slipping Away' gave Max Merritt the biggest hit of his career, peaking at No.2 in Australia and No.5 in NZ.

Ex-[Ray Columbus and The] Invaders Dave Russell joined the band at a time when Merritt had London in his sights. They arrived in August, leaving behind a second album (Stray Cats) and a four-part series for ABC Television, Max Merritt and The Meteors In Concert, recorded in front of a live audience and augmented by additional horns. 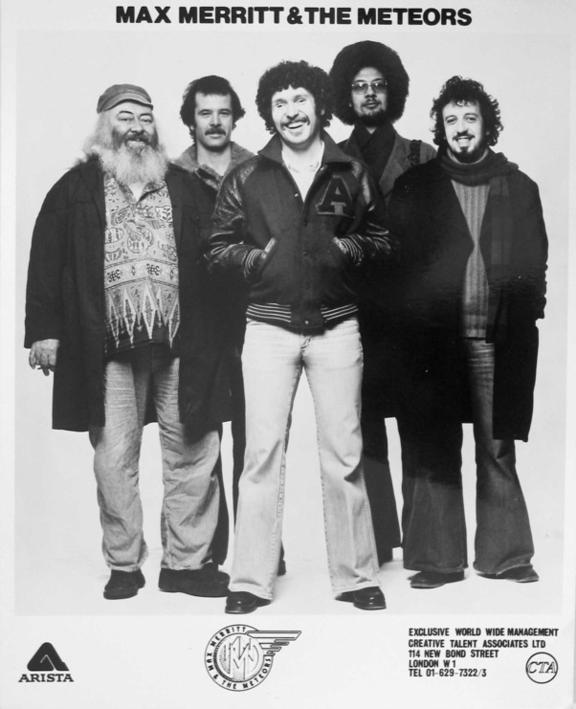 Max Merritt and The Meteors in the early 1970s in London. This was the band that recorded Slippin' Away. Photo: Courtesy AudioCulture

In 1973 there were signs that the band was making headway with support tours with The Moody Blues, Slade and the post-Morrison Doors, but in 1974 Merritt's career hit an all-time low when it was discovered that departing manager Peter Raphael had misappropriated band funds.

Max Merritt, for the first time since 1962, returned to his trade as a bricklayer.

In May 1975 Clive Davis, head of newly-formed Arista Records, signed The Meteors as the label's only "British" act. 'A Little Easier' was released in July and an album of the same followed. The second single was ... that song.

'Slipping Away' was released in September 1975, making no impression in Britain but down under it gave Max Merritt the biggest hit of his career, peaking at No.2 in Australia and No.5 in NZ. "That song struck a chord with a lot of people," Max says, "and I'm very proud of it. It has been very good to me."

In July 1976, The Meteors toured Australia to promote the second Arista album, Out Of The Blue. The performance at Melbourne's Dallas Brooks Hall was recorded and later released as the third and final Arista album, Back Home Live.

Back in Britain, though, it was back to the grind and the band's progress was sabotaged by the arrival of punk. "We looked like a bunch of old men," Merritt says, "and we were! We didn't fit anymore."

Disbanding The Meteors, Merritt shifted to Los Angeles in 1978 and two solo albums followed (Keeping In Touch and Black Plastic Max), with Merritt touring Australia every two or three years. In 1990 a reformed Max Merritt and The Meteors played The Gluepot, Max's first NZ performance since 1966.

In 2002 his performances on A Long Way To The Top, featuring a who's who of past Australian greats, saw Max Merritt's star rise once again. He became a popular fixture on the summer festival circuit and, touted as Australia's King of Soul, he was curtain-raiser to some of his musical heroes - James Brown, Ray Charles, and Wilson Pickett.

In April 2007 Max Merritt was inducted into Christchurch's Rockonz Hall of Fame, preceded by a national tour with Dinah Lee. On his return to LA he was diagnosed with Goodpasture's Syndrome, a rare auto-immune disease which requires twice-weekly dialysis. "Trust me to get something no one has ever heard of," Max said. In October 2007, 50 Australian acts - including Daryl Braithwaite, John Paul Young, and James Reyne - rallied together for a concert which raised $AU200,000 for Merritt.

In 2008, Merritt was flown to Australia for his induction into the ARIA Hall of Fame.

Merritt was in a Los Angeles hospital in September 2020 when he died of Goodpasture's Syndrome. He is survived by his daughter Kelli, son Josh and three grandchildren.