The gaming industry makes more money worldwide than movies and music combined. And many game developers are popping up around NZ - which means opportunities for musicians hoping to get into the business.

Intrigued by this, Tony Stamp seeks out some of these company's in-house composers to learn more about how they got started, the gear they use, and how they approach creating epic scores. 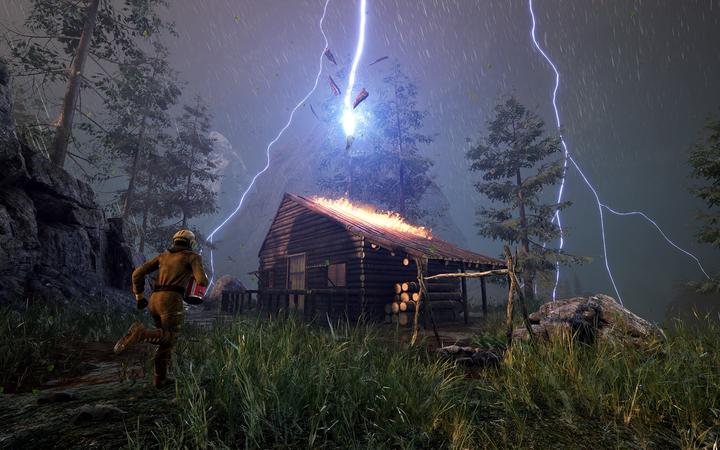 Tony Stamp: At around 11am one Tuesday morning, I find myself heading up to the 38th floor of the PWC Tower in Auckland.

The elevator has glass walls, and my vertigo kicks in. I step out into a lobby that’s completely black, apart from some coloured neon lights that point toward an entrance. It feels a bit like being inside a video game, and that’s by design, because this is the entrance to Rocketwerkz video game developers.

My guide is Andrew Reid, audio director and composer at the company’s Auckland office - they started in Dunedin but have opened up here too.

After I’ve signed a digital non-disclosure agreement Andrew leads me through a door into the main office. There are floor-to-ceiling glass walls looking out onto the harbour, and maybe fifty people working in an open-plan office. I wave hello to the CEO Dean. He’s wearing a t-shirt. Later Andrew will tell me there’s no one here older than their early thirties.

Andrew's studio is near the middle of the office. There are two control rooms and a recording space in between them. Dotted around are synths and outboard processors, guitar amps and pedals, and a metal frame that Andrew has been hitting to generate sound effects. 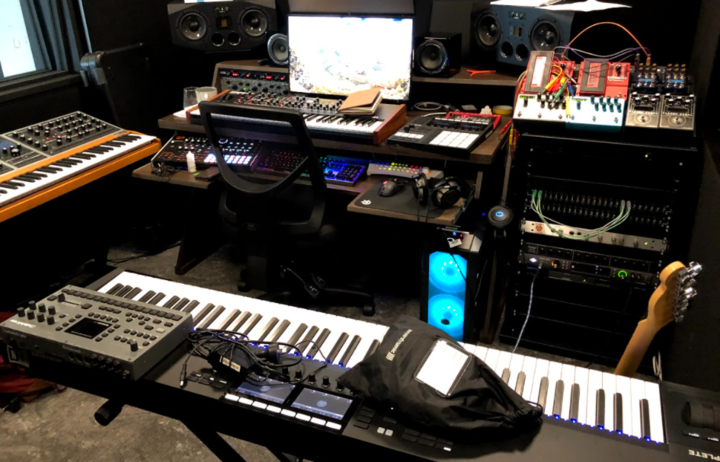 The studio of Andrew Reid, a composer for Rocketwerkz Photo: supplied

It’s not something you’d expect to find in a downtown Auckland office, but the video game industry is only getting bigger.

To learn more, I got in touch with Mitch Cramer, who runs a YouTube channel called HeavyEyed, where he uploads videos looking in-depth at game design "from a personal perspective”.

His channel currently has around 33,000 subscribers.

Mitch tells me “a lot of people grew up with a Nintendo Entertainment System in the eighties and early nineties, and just never let go”.

I asked him to tell me about some locally-made games, and he mentions Mini Metro, Ashen, and Best Friend Forever.

“There are heaps of studios popping up making games”, he says, partly crediting the industry's growth to Path of Exile, made by Grinding Gear Games (or ‘GGG’). He tells me it’s one of the biggest games in the world.

Path of Exile launched in 2013, and by 2014 had five million registered players. In 2018, GGG was purchased by Chinese gaming company Tencent for an estimated $100 million. In 2020 they reported revenue of $113 million.

You might think that an organisation the size of Grinding Gear Games would have a big music department, but it's actually just one person - Kamil Orman-Janowski.

“I started as an EDM producer”, Kamil tells me over Skype from his studio in Henderson. “I was making trance and progressive house over ten years ago but decided to stop with that because there were plenty of limitations.

“I really enjoy going beyond any genre. Working with pictures gives me that opportunity to try new things, and collide different things with each other to create hybrid stuff.”

Kamil moved to New Zealand from Poland around five years ago. He was working remotely for GGG until they offered him a role here, and he leapt at the opportunity.

It's a bit of a dream job for Kamil, and he’s enthused about the game industry.

“It keeps growing”, he says. “Games are such a big part of everyday life, from very small ones to very big ones”. 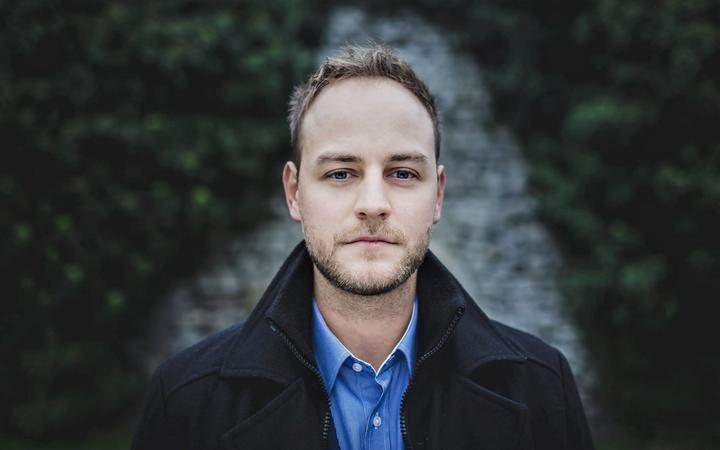 A report in Reuters showed global gaming revenue in 2020 was almost US $160 billion - that’s across consoles like PlayStation, mobile phones, and computers. It’s more than the film and music industries combined.

Pre-pandemic, in 2019, that figure was $150 billion. For comparison, global box office revenue was around $40 billion.

So games are clearly big business, which means opportunities for composers and sound designers.

A seasoned composer who’s dabbled in the game world, Hamish Oliver has worked in film and TV since 1997, played piano in the Christchurch Symphony Orchestra, and had lecturing gigs at the University of Canterbury, MAINZ and other institutions.

“I got really intrigued and went further and further into it,” he tells me, mentioning some indie games he’s worked on for Christchurch locals, and bigger ones that were never completed, “but Game Jams is where I end up being most active.

“It’s just like the 48 Hour Film competition, but people make a game in a weekend rather than a film. It’s great practice for your skills. I help organise them in Christchurch.” 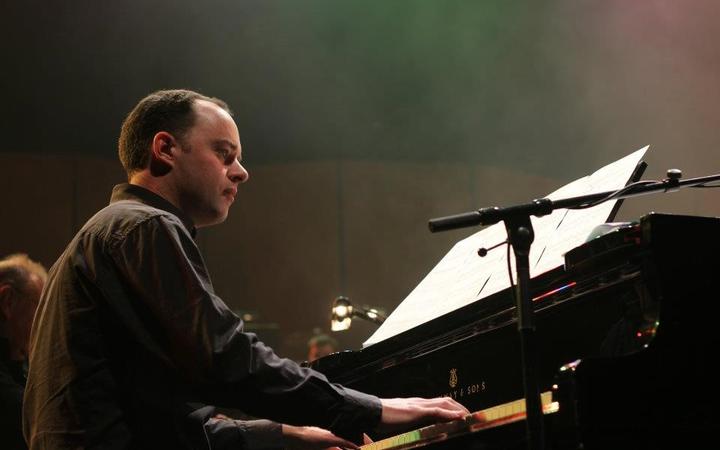 Hamish first became intrigued by game music around fifteen years ago, when he was reading some academic papers in a university library. They weren’t about musical aspects or gameplay, but “this clever system which meant you could modify things on the fly, as the player was doing things”.

This idea of interactive audio is one that all my interviewees were enthused about.

Kamil explained further: “Let’s say there’s a boss fight. The music is divided into segments. Depending on the state of that boss fight, certain segments can be activated, in order to help the narration with music.

“Let’s say there’s a specific phase where the boss can be destroyed completely. There’s a higher tension in that moment, and the boss unleashes a meteor shower, for example. We want to emphasize that with music as well.” 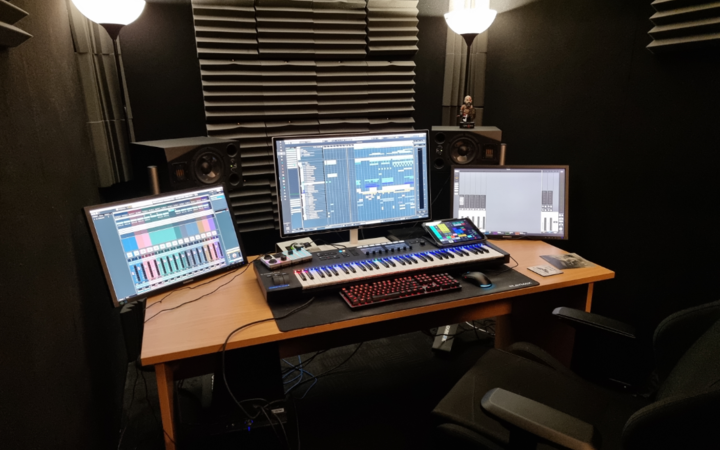 “It’s genius. I don’t know how they do it,” enthuses Mitch Cramer, “but you will be playing, say, Uncharted and you can just wander around and find some little collectables, but the second you decide to progress, you might get attacked, and that instant the music changes.

Back at Rocketwerkz, Andrew Reid elaborates: “That kind of ‘branching music tree’ is something that’s common in big AAA games. It’s about context: if the player is making the decision to sneak around enemies as opposed to engaging them, you have to say  ‘Ok, we need a way to play the sneaky music as you move around.’

“How do you know that the player is sneaking? That alone could be difficult to figure out. What if someone sees the player? What do we do then? How do we deal with it if the player is so good at the game that they engage the enemies and get rid of them before the music has time to spool up?

“It’s just a cacophony of madness trying to keep your head around all that stuff”.

This is the big difference between scoring music for games, as opposed to film or TV: there are technical elements to consider, but those also create artistic opportunities.

For example, Kamil scores everything in the same key to account for those ‘branching music trees’, whereas Hamish doesn’t.

Games take a long time to make, and Andrew helped shed some light on why: “When you’re adding something to the game it’s not necessarily a simple thing. Someone creates a game mechanic, that mechanic might be quite complex, and for us to actually account for the audio for that mechanic we actually have to build a system to handle it”.

There’s plenty of scope for musicianship too. Rocketwerkz has spent the last few years working on a science fiction game called Icarus, for which Andrew requested a Moog One synthesizer, finding its analogue tones fit the story.

When I visit the studio, he tells me he’d recently been banging a metal plate with two spanners, to create a particular percussion sound. The end result is epic and cinematic.

In the game world, in-house composers aren't common. They’re usually contracted in at some point, meaning Andrew and Kamil are in relatively rare positions.

“Stability in this over-saturated market of thousands of composers is a good thing,” Kamil tells me, “and when it comes to your connection with a game, after time it becomes more like your own project; your own baby. It’s a different feeling entirely.”

RNZ recently reported on the game industry’s annual contribution to the economy, which is around $320 million. The industry has had annual growth of 46 percent over the past six years, and is expected to create 150 new jobs over the next year.

It could lead to more in-house composers like Kamil Orman-Janowski and Andrew Reid, and there’ll certainly be opportunities for freelancers like Hamish Oliver.

Talking to Mitch Cramer, it becomes clear that, increasingly, this music means as much to people as the games it was written for.

“In Auckland years ago there was a big symphony that played an hour and a half of music from Zelda. Other games like Final Fantasy and Kingdom Hearts have had it too. Japanese games have touring symphonies constantly.

“Technology in consoles was so limited, and now you can do whatever you want. It’s not just little bits of background music, there’s actual big pieces of composition going into it now.”