Canadian band Kiwi Jr have just released their second album Cooler Returns on Sub Pop Records, getting acclaim for its mix of indie rock hooks and singer Jeremy Gaudet's witty, inventive wordplay. Tony Stamp talked to Kiwi Jr about their name, their love of NZ bands, and the stories behind some of their most intriguing lyrics. 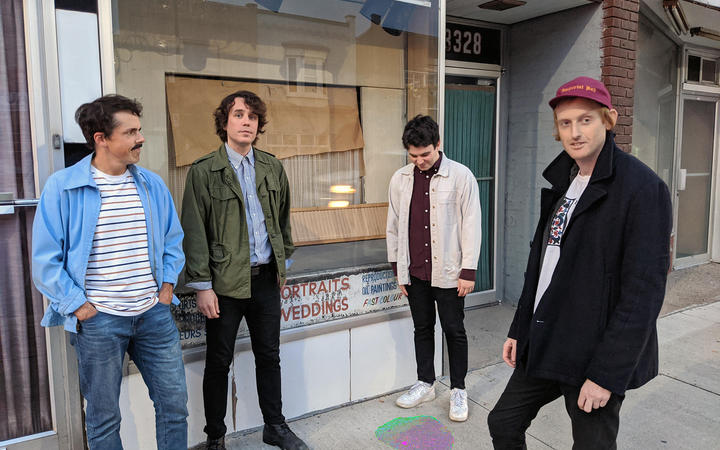 Tony Stamp: As a Kiwi, I was obviously intrigued by your name, and I haven’t managed to find out why you called yourselves that.

Jeremy Gaudet: I wanted to use the name Kiwi just because it sounded really cute. We had to add the ‘Jr’ shortly thereafter, to differentiate ourselves from all the other dance acts and rock groups called ‘Kiwi’.

JG: Well man, I tell you, I didn’t think they existed either. But when we played a show one time, the promoter told us ‘I almost didn’t let you guys on this bill because I listened to your music online and it wasn’t my thing. But it turns out it wasn’t your band at all, it was some band from The Philippines'.

We do get asked a lot if it’s a New Zealand thing. But it’s not.

Listening to you guys I can hear echoes of Flying Nun bands from NZ like The Chills or The Bats. Are you familiar with them?

JG: I Love all those bands. The Verlaines are one of my favourite bands. Chris Knox too. Lots of good stuff.

Brian Murphy: We actually covered a Clean song once, which was fun - ‘Thumbs Off’.

That era of NZ music has seemingly influenced so many bands.

JG: There’s so much good stuff per capita from NZ. I got really into the Darcy Clay EP over the last couple of years.

He was a fascinating character.

JG: It’s so wild to see photos and videos of what he was doing at the time too. It almost reminds me of what Mac DeMarco was like when he was first starting, being this crazy character. It was almost like post-irony, you know what I mean? Dressing uncool on purpose until it becomes cool. Things like that.

I was reading that Darcy Clay got to open for Blur, when Blur was there?

I was there man!

JG: What?! Wow. I heard that recording, it’s ridiculous.

I read an interview with you talking about music as ‘a selfish pursuit’, which struck me as something an American band probably wouldn’t say, but I can definitely imagine a NZ band saying it. Do you think this is because both countries are part of The Monarchy?

JG: Ha, yes. Also where we were all born is a remote island, not totally similar to NZ, but there’s definitely a similarity there.

It’s almost like we’re apologising for putting out the record. ‘Sorry everyone, here’s another rock record’.

BM: I think we have a shared sense of humility maybe.

My next few questions are about lyrics. A lot of attention has been paid to Jeremy’s sense of storytelling. Was that there from the beginning, or did you just sort of want to sing about yourselves at any point?

JG: No, I think that it’s a result of not wanting to sing about ourselves. Maybe that’ll change on the next record though, who knows.

Sometimes when I say ‘telling stories’, it’s a bit of a cop out. I’m just kind of saying ‘here’s something that might not be linear, there might not be characters, but from where I am, there’s a narrative. So I say storytelling, but it’s not in the tradition of folk music or anything.

JG: I know what you mean. I don’t like in reviews and interviews when people say that the album lyrics are full of non-sequiturs, because there’s definitely a lot of time spent figuring out how it’s going to work within one lyric.

Can I throw a few lyrics at you, and you tell me if it’s based on something real or not?

JG: That’s funny you picked that one. I think that’s one of Brian’s favourites.

BM: I love that one. It makes me laugh all the time.

JG: That’s not based on reality, but I have personally witnessed the frustration of young adults when they don’t get into some fancy school that they want to get into, whether it’s creative writing or film school or whatever it is that’s going to make them really cool and creative. In that song there’s a lot about film sets, and the weird layers of artifice that exist on a film set. I just wanted to tie something in with that idea of a kid going nuclear when he didn’t get in.

Can I guess actually? Was it someone who looked like one of the characters from Ghost World?

JG: Not necessarily looked like, just the vibe of that kind of Ghost World-type character. Kiwana’s Canteen is a place in our hometown.

JG: Yeah that’s probably happened like a thousand times in this band alone.

To finish, I know ‘Cooler Returns’ has an ambiguous meaning to it, but I know part of it is a signoff, and I really like that idea, so let me just say to you guys: ‘cooler returns’.

Cooler Returns is out now.