Ian Morris Ian Morris, a founding member of 1970s New Zealand rock band Th' Dudes, died ten years ago this month. Morris was at school with other well known New Zealand musicians Dave Dobbyn and Peter Urlich. They became friends and ended up forming Th' Dudes, along with Bruce Hambling and Peter Coleman. Urlich says Morris was his oldest and dearest friend for the past 43 years and was just as at home with classics, jazz and country music.

After Th' Dudes split up, Morris went on to become a successful producer and record engineer and worked at Marmalade Studios in Wellington. In 1987 he had a No 1 single with Tex Pistols and The Game of Love. He produced and sang in the cover version of the classic song.

Ian's family have released a posthumous album A and B and C of D, a solo record completed before his death.

Nick Bollinger reviews the new release on this segment of The Sampler.

Ian Morris - The Distance Between You and Me

Ian Morris - Between the Stirrup and the Ground

Ian Morris - Nobody Rides For Free

Ian Morris - It's Over 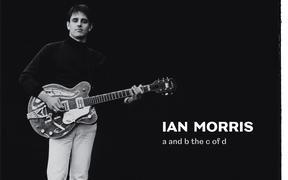 Ian Morris A and B and C of D album cover Photo: supplied