INTERVIEW: Bruce Springsteen on new album Letter To You

Using a "gorgeous" guitar gifted to him by a fan, Bruce Springsteen found his new songs came pouring out. He recorded them with his lifetime companions, the E Street Band, in just five days, and Letter To You was born.

Bruce Springsteen's new album was sparked by the loss of a his friend and teenage bandmate George Theiss. When Theiss died in 2018, Springsteen became the last surviving member of their band The Castiles: "It was a very strange feeling."

"I wrote a song called 'Last Man Standing'," Springsteen told Music 101 on Zoom from his home in New Jersey, "Once I wrote that, the dam broke and all the other songs followed in about seven or 10 days."

Springsteen wrote the songs on a guitar gifted to him when his hugely successful stage show, Springsteen on Broadway was playing. One night he came out of the theatre and saw a young man holding a guitar.

"I figured he wanted me to sign it. But he said, 'No, no, I want to give it to you,' and I looked at it and I could tell right away it was beautifully made.

"So I brought it home and I looked at it and it played beautifully. It sounded gorgeous and the wood in it - it had a variety of different types of woods. It was a real piece of craftsmanship so I left it in my living room and when I started to feel the urge to write I just picked it up because it was such an easy play.

"Most of the songs came pouring out of it so I owe a debt to whoever that young man is or wherever he is.

"But instruments have power in and of themselves. Guitars are inspirational and they do hold songs within them and it's wonderful to discover them." 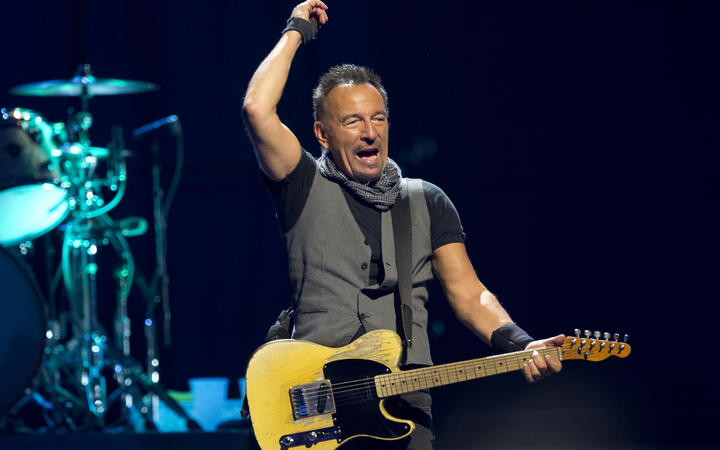 Bruce has sold more than 150 million records worldwide and has won plenty of awards too, including 20 Grammy Awards, two Golden Globes, an Academy Award, and a Tony Award (for Springsteen on Broadway). In 1999 he was inducted into the Rock and Roll Hall of Fame and was awarded the Presidential Medal of Freedom by President Barack Obama in 2016.

Despite this, he still describes song writing as an equally terrifying and incredibly fulfilling experience.

It's terrifying because you never knew whether you will be able to repeat the magic, Bruce says.

"I've done it for 50 years. I don't know how a song takes place and I don't know anyone who's ever been able to explain it because you pull something from nothing and you create something physical from it...

"There's an element of it that is quite frightening in a sense and then there's another element where, when it does happen and something's good, it's one of the most wonderful feelings in my life ...it's still an incredible experience, the act of writing a song."

He says he generally writes about a third or half of a song at a time, "a little bit piecemeal" and it's a "tremendous relief" when songs are composed as quickly as for this album.

A lifetime in a band

Letter to You is Bruce's 20th studio album and marks the first album with his regular backing band The E Street Band since 2014's High Hopes.

The album is about rock'n'roll, about being in a band over a lifetime, reflecting his start in 1965 and the E Street Band that he's been part of for 45 years and the world they've created with their fans. 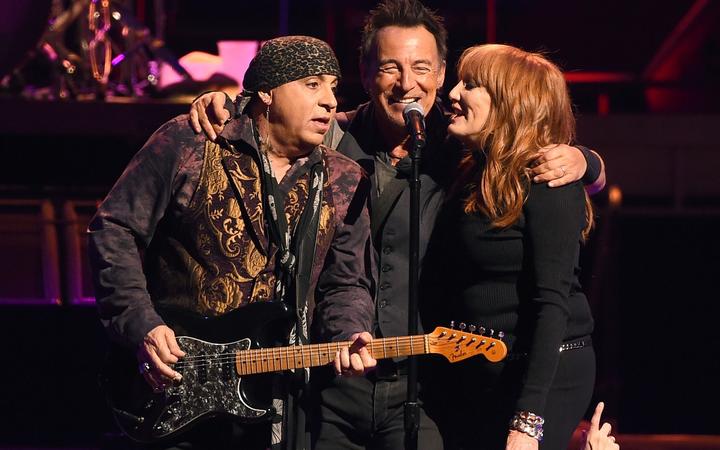 He says he recorded all the songs with his acoustic guitar on his iPhone first and then the band came into the studio and learned them.

He wanted a sound that was just the basic band with no extraneous instruments. "I wanted two keyboards, guitars, bass, drums - I just wanted the raw sound of the band the way it existed on say Darkness on the Edge of Town and so it really suited itself to immediate live recording."

Reuniting once again in the studio with the E Street Band was "a sweet benediction". They recorded the new album in just four days and on the fifth day they "listened and told stories".

"It was just a great process ... [we] spent about three hours a song, the band played entirely live, all the vocals are first takes. So it was just a unique and wonderful experience for us." 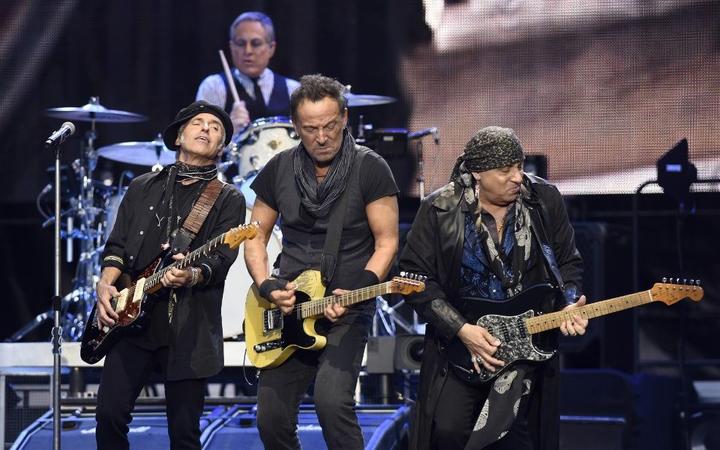 The album includes a few songs that he wrote years ago such as 'Janey Needs a Shooter' which he cut for Record Store Day in the US and has been sitting on since 1972. 'If I was the Priest' and 'Song for Orphans' are other old songs.

"It was a lot of fun to sing in the mind of your 22-year-old self with your older voice - it was quite a treat."

Bruce is emphatic that any song needs a good metaphor to start with and a memorable title.

He agrees that 'The House of a Thousand Guitars' is the album's centrepiece and one of his best songs. It's helped by having a distinctive title and he cites other hits such as 'Thunder Road', 'The Rising' and 'Born to Run' as also being well named.

Bruce, now 71, increasingly reflects on a lifetime of music centred on the E Street Band and fans who have stayed the course with him. 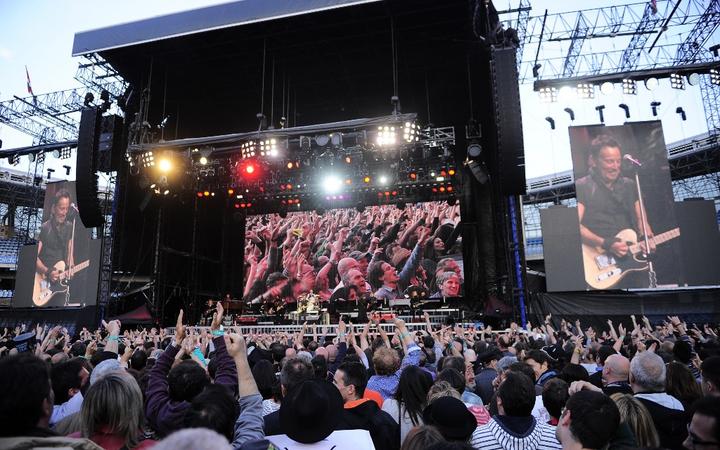 He says 'The House of a Thousand Guitars' is about the world he has created with both his band and his fans - encompassing the spiritual and intellectual dimension he has created.

Mention of the E Street Band prompts him to ask people to imagine being in high school and then imagine they are now 70 years old and all along they have worked with the same people.

"There is no business in the world where that occurs with the exception of a rock'n'roll band... so it's a privilege and an honour and a miracle to have sustained all those relationships over that long a period of time because it takes quite a bit of social skills and tolerance for the other guys' foibles, point of view, and their tolerance for mine.

"So it's quite challenging but if you can do it it's quite rewarding." 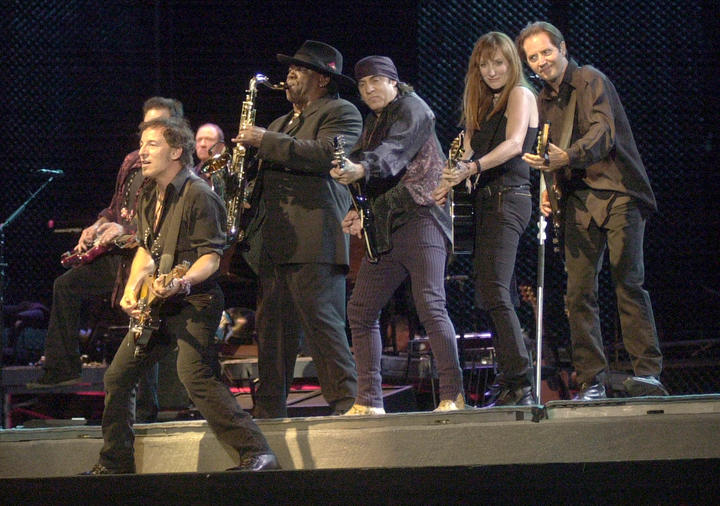 Bruce Springsteen and the E Street Band at a concert in Boston in 2003. Photo: AFP