Part 2 of 3 Nick D in Beirut
War & Beats. The capital city of Lebanon, Beirut, has been ravaged by war for the last four decades, yet it has given rise to one of the most beautiful and vibrant music scenes in the Middle East. Nick D meets with some of the city's most infamous musicians, from underground sensations to legendary superstars, and finds that when people are not sure when it's all going to end, they live their lives - and create their art - to the fullest. More here 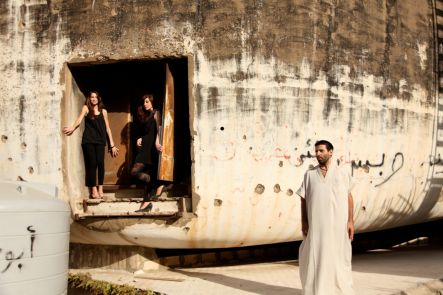 Zeid Hamdan & The Wings in Beirut by Warren Green

As the countdown begins to the Big Day Out a bunch of local bands are rehearsing furiously to cut it with the big acts on the bill. Nick Atkinson speaks with one such group, drum 'n' bass newbies Six60.

Featuring extracts from the concert movie: 'Ladies and Gentlemen: the Rolling Stones' and the 2010 documentary 'Stones in Exile'. Both films revolve around the highly regarded 1972 album 'Exile on Main Street', which was recorded in somewhat chaotic circumstances in the basement of a French villa while the band avoided the UK taxman. This radio programme includes comments from Mick Jagger and Keith Richards. (Denny Somack Productions)

And Canadian producer Caribou talks about playing a brothel in Colombia, his shape-shifting abilities, and upcoming NZ appearances.

Dirty low-down sci-fi, psycho-surf-rock'n'roll-a-billy quintet The Drab Doo-Riffs play hard and fast songs from their EPs: Bury Me In Drab and Postcard from Uranus at the sold-out Kings Arms in Auckland - the party starts here. Listen here

And we share our excitement about gigs we've seen this week and upcoming gigs around NZ.

Celebrity musical guests are invited in to spin their choicest cuts. This week, rapper and philosopher Tom Scott, from hip-hop crew Homebrew.

Tom's Mixtape - songs that were sampled to make his favourite tracks.