Storm Thorgerson designed the album covers for some of rock's biggest artists including Pink Floyd, Led Zeppelin and the Mars Volta. Trevor Reekie speaks to the artiste for Access All Areas this week. Listen here.

New York based Montpellier native Emilie Simon performs with a quasi-robotic arm that she uses to theatrically affect her voice. Nick Atkinson talks to Emilie about synths and her first predominately English language album, The Big Machine.

British singer-songwriter Ed Harcourt packed up his wife and daughter and headed out to the wilderness of Washington State in the Northwest USA to record his new album Lustre. Marty Duda speaks to Ed Harcourt about recording in the rough and running his own record label. Listen here.

Takaka based songwriter, performer and storyteller Levity Beet (Nick Hollis) has been writing entertaining songs for children since he was one himself. In between albums - number four is on the way - Levity Beets tirelessly tours the country's primary schools and kindergartens. Emma Smith attends a Kindy gig and talks with Levity Beet about the art of appealing to ankle-biters and their minders(pictured below). See more photos and download the programme here.

And Sleepy Kid - a.k.a. musician and actor Johnny Barker - performs live at the Classic. Listen here. 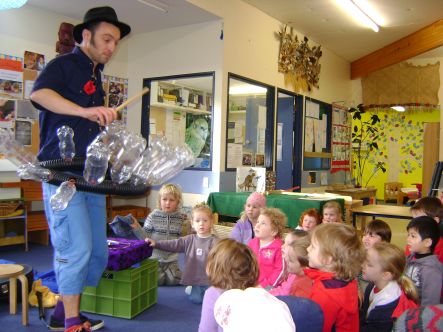