Wellington City Council is calling for whoever stole part of the city's famous Bucket Fountain to return it. 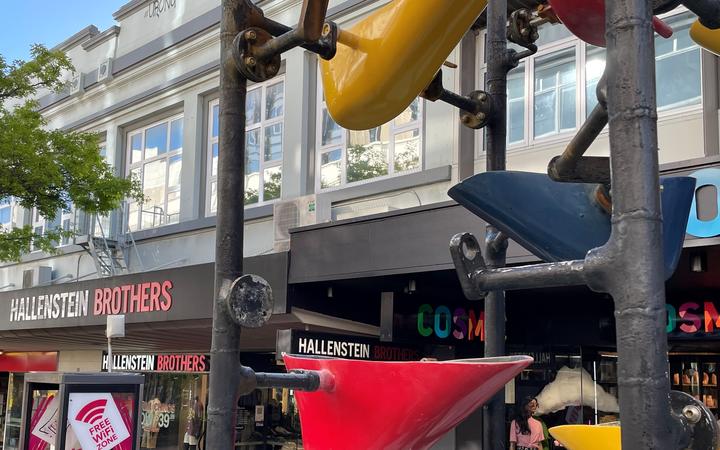 The spot on the fountain where the missing bucket used to sit. Photo: RNZ / Samuel Rillstone

Council spokeperson Richard MacLean told Morning Report that sometime over the past couple of weeks, someone climbed the Cuba St fixture to nab a medium-size yellow bucket.

MacLean says he doesn't know if it was a repeat offender, but the same bucket has been stolen before.

"I find myself in the unfortunate position of having done this for a second time. Looking back at our archives, in 2016 the same bucket disappeared."

The iconic Bucket Fountain sculpture was first erected in 1969 and consists of a series of buckets that fill with water until they tip, often splashing water onto the pavement.

MacLean said it has a spotted history, which includes Lord of the Rings movie star Elijah Wood urinating in it.

People making off with it appears to come with the territory.

"Very weird things happening in the Cuba mall, in the early hours of the morning," MacLean said.

"So, we just have to live with this stuff every so often, people make off with parts of the Bucket Fountain."

Last time the bucket was gone for a week before being returned with a "psychedelic paint job", but MacLean is losing hope that will happen this time around.

Instead the council has opted to build a replacement for the bucket.

"I just asked the question how much it will cost, I mean, we're probably talking somewhat of a four figure sum I would imagine, being realistic," MacLean said.

"Apparently it's fiberglass, so probably some sort of specialist surfboard maker or something out there is now forming the bucket as we speak."

He's still appealing to whoever took it to take a change of heart through.

"All we can say is bring back the bucket. We always prefer original stuff rather than having to rebuild."