Wallaby pies back on the menu in Waimate

Waimate residents are jumping at the chance to try Wallaby pie at a local eatery.

The signature dish is now top of the menu at The Barn Cafe and Bar after a few years on hiatus and it's gaining popularity with some adventurous punters.

Restaurant co-owner Adam Wilson spoke to Morning Report shortly after polishing off one of the pies for breakfast, saying around 100 people have tried them so far.

"A bit of a gamey taste but not too bad," Wilson said, referring to the marsupial's flavour. "Between venison and lamb."

A population of Bennett's wallabies lives in the small Canterbury town, after being introduced from Australia in 1874 for the fur trade and their numbers quickly ran into the thousands.

They're kept in an enclosure in the centre of the town in Victoria Park, as well as at a nearby sanctuary EnkleDooVery Korna. It's also not uncommon to see wild marsupials out and about on the town's walking tracks. 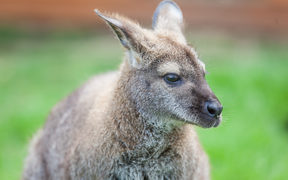 Members of the public might find wallabies a bit too cute and cuddly to consider for a pie filling, but Wilson he has no such qualms.

"Some people find them cute, others would find them a pest," he said.

Wallaby eating habits threaten native bush, forests, farm pastures and tussock highlands. They're popular game for hunters because of this.

The wallaby meat comes to the restaurant from a local game butcher as you need a licence to process it.

Wilson said he was hoping capitalising on Waimate's reputation for wallaby might encourage people to visit the area and try it out.

He's even offering mini wallaby pies and live music over the weekend, predicting he may be overrun with daring diners looking for a big night out.

"They'll be jumping off the walls," Wilson said.