Blenheim man Craig Harper is catching up on some seriously overdue rest after competing in what's billed as the world's toughest cycle race; nearly 5000km across the United States in just 10 days.

That meant pedalling for more than 22.5 hours a day through extreme weather and geography. 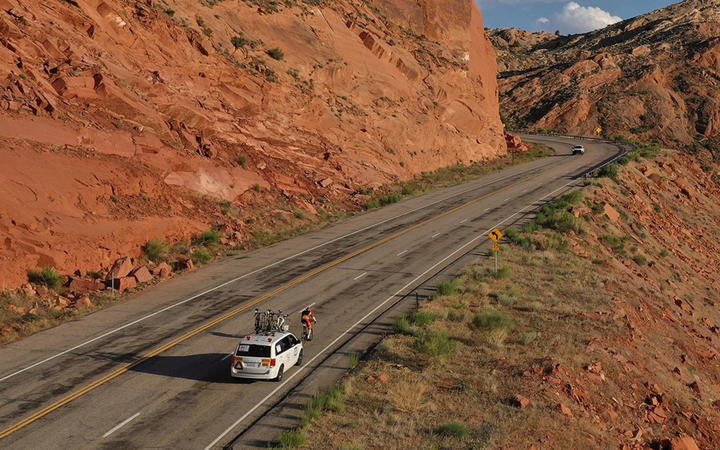 Craig Harper is competing in what is considered the world's toughest cycle race, the Race Across America. Photo: Supplied / Solo.Kiwi

The race, in which Harper finished fourth, began in California and ended in Maryland.

He told Corin Dann he was still exhausted.

“It's amazing what the body can do but it also does take its toll so there’s plenty of R&R on the cards for these next few days.

The temperature ranges during the day could be extreme, says Harper.

“Through California and the Arizona deserts that we rode through it was really intense heat, we also had some quite cold conditions in the balance too, so one day I remember I think on the second day it went from 46 degrees during the day to two degrees at night.

“It’s a massive contrast, so it was really tough on the body.”

Harper had a support crew that kept him on track and enabled him to focus on cycling.

“There's a lot of challenges physiologically, including things like fluid retention, and getting your hydration right and the fluid balances right in your body.”

It's not billed as the toughest possible bicycle race in the word for nothing, Harper says.

“There's so many variables that everybody's best laid plans get turned upside down at some stage during the race.

“It's just the nature of the bike race, you can't you can't plan for everything and I think that’s half the challenge and half the intrigue for me, actually dealing with those things on the road.”