Thousands of Danish metal fans performed the haka for Kiwi band Alien Weaponry over the weekend at the Copenhell festival.

The three-piece metal band from Waipu, who sing in te reo Māori, usually start their performances with a haka. 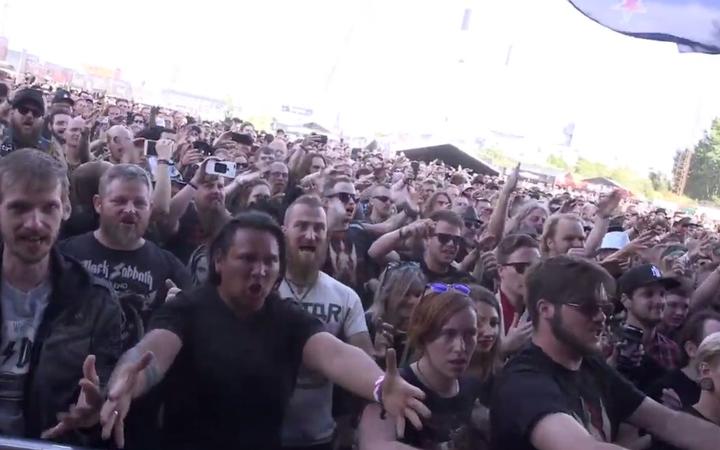 This time the crowd had prepared a reply. Kane Harnett-Mutu is based in Denmark, where for the last 20 years he has been teaching haka, he told Susie Ferguson he had 20 minutes to teach the fans.

“Since I live here in Denmark, and speak Danish, it made things a lot easier, so I could actually come up and begin to explain the kaupapa to Danes in a way that they could connect with it.

“Basically, I had 20 minutes to teach a haka to them, which we built up slowly and in layers until we got it finished. And with such a such a large crowd, I was so blown away by how quickly they picked it up.”

Harnett-Mutu says the haka built connection between the fans and the band.

“We wanted to connect it to the whakapapa of the boys and also to sort of build a real strong connection between the group. We just kept it real simple, using some of our common elements from haka, it was basically focusing on standing tall, supporting the boys in their journey and facing adversity together.”

The Danes had an instinctive feel for the haka, he says, which he puts down to distant tribal roots in their own culture.

“I think for Danes and for people of the Nordic regions it was really like a way of coming home and I think that was one of the reasons why it just felt really natural to do this for the first time here in Denmark.”