The government has asked councils to check whether cladding with combustible components was used on New Zealand high-rise buildings before being banned. 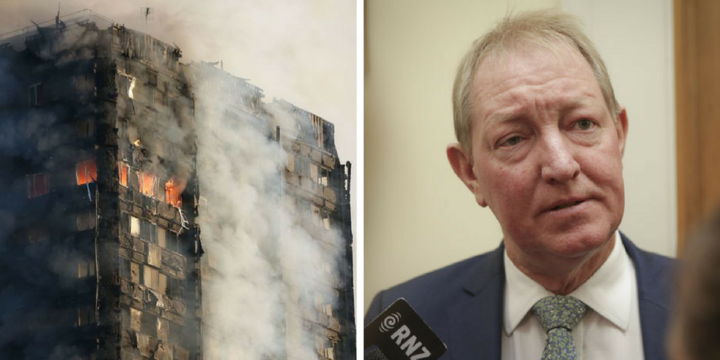 At least 17 people died and dozens more were injured when the 24-storey Grenfell Tower in west London became engulfed in flames on Wednesday morning.

The cause of the fire is not known but there has been speculation that a type of aluminium composite panel, with a combustible plastic core, enabled the fire to quickly engulf the building.

Another type of panel - one that has a mineral core, which is much more fire resistant - is used widely in New Zealand.

The government brought in regulations on 1 January prohibiting the use of the most combustible type of panel in high-rises, following major fires in Melbourne and Dubai.

Building and Construction Minister Nick Smith said his officials were reasonably confident that the banned type had not been used in high-rise structures.

But he told Morning Report after a disaster of the scale of the London fire "you have to kick the tyres and re-check".

"Were any of these combustible aluminium composite products used prior to them being prohibited on high-rise buildings?

"I've asked my ministry yesterday to check with our major metro councils.

"New Zealand's housing mode is changing in cities like Auckland Wellington and Christchurch. We are getting a larger number of high-rise residential buildings."

"We have quite different legislation in place.

"Things like sprinklers in our buildings actually, you know, really add to the safety of our buildings," he said.

Auckland building consultant Louise Swann is calling on the government to suspend certification of aluminium composite panels in the wake of the fatal tower fire.

Ms Swann said she was not questioning the product itself.

But she said a temporary halt in certification was needed to review information provided on how to install the product in order to resist both water and the spread of fire.

Certificates are one common way of showing a product complies with the Building Code, and if it is issued by an accredited certifier a local council must accept it.

"That certificate is so critical and that's my concern," Ms Swann said.