Children can get legal information about their rights at school at their fingertips, after a community law service developed a mobile chatbot. 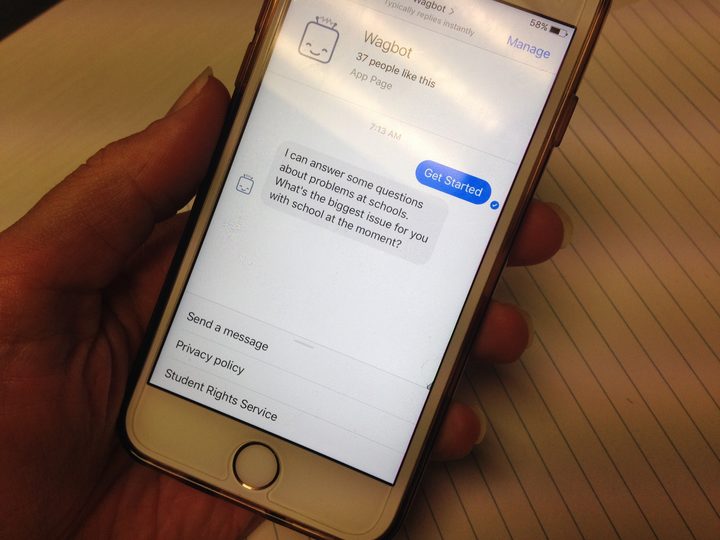 Pupils can interact with the bot on Facebook Messenger. Photo: RNZ / Kate Newton

Wagbot is a chatbot that uses the Facebook Messenger system to respond to students' questions about common problems such as detentions and suspensions.

Community Law Wellington general manager Geoffrey Roberts said students and parents needed quick access to legal information because it was hard to appeal once schools had decided on a punishment.

"There are very limited powers of appeal of any final decision made by a board of trustees."

Post Primary Teachers' Association president Jack Boyle said teachers should not be worried by the prospect of children having a digital lawyer at their finger tips.

"Anything that inspires kids to learn about their rights should be encouraged," he said.

"It's illustrative of how teachers can't just rely on their position of authority the way they used to."

Secondary Principals Association president Mike Williams said interpretation of human rights law varied, so in some cases there would not be clear-cut answers to students' queries.

However, Wagbot was unlikely to cause problems for schools, he said.

"Schools' processes should be fair, they should be just and certainly within the law, so students knowing their rights around that is fine," Mr Williams said.

Meanwhile, Community Law Wellington said it was interested in creating legal chatbots for other groups, including people claiming benefits from Work and Income, and for its 900-page community law manual, which contained about 3000 legal questions.