TPP back on track with Japan's support

Japan is committed to an early implementation of the Trans-Pacific Partnership trade deal, the country's leader has told Prime Minister Bill English.

Mr English said he was "very pleased" with the outcome of talks in Tokyo on Wednesday. "We got better than I'd expected," he said. 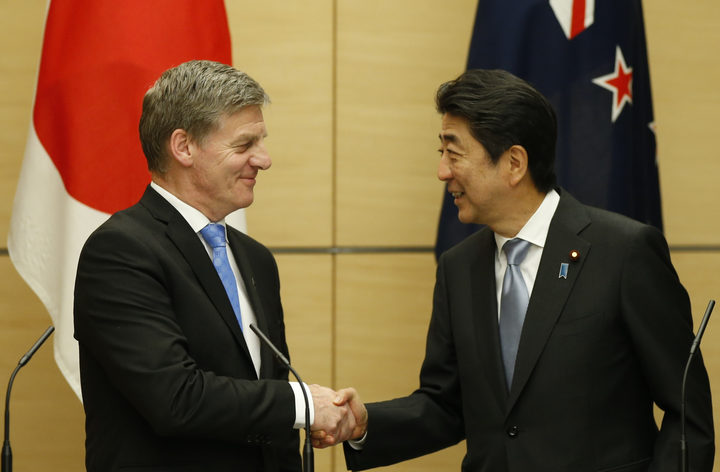 The future of the TPP has been up in the air since the United States withdrew earlier this year, with particular concern over whether Japan - the next largest economy - was still keen on the trade deal.

"As the flagbearers of free trade ... we will aim at early realisation of TPP and early conclusion of RCEP," he said at the joint media conference.

"At this time of international uncertainty, it's more important than ever for outward looking trading countries like New Zealand and Japan, who stated their principles clearly, to demonstrate our commitment to international trade and to regional economic integration."

Mr English said the outcome of the TPP discussions were better than he'd expected.

"Prime Minister Abe is committed to implementing the TPP on the timetable it's on. They call it early implementation. He's keen to see, as we are, the next officials' discussion next week get to work on a plan for implementation."

Mr English said if the countries stuck with the current timetable, the TPP would start in the first half of next year.

He conceded there would be some discussion about potential changes to the agreement, but it was clear if the deal was to be implemented next year, the current text would have to be used.