Bung the Bore petition to be presented at Parliament today

A petition signed by more than 15,000 people demanding a halt to exports of water is being presented at Parliament today. 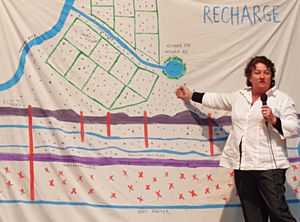 The Bung the Bore campaign began when the Ashburton District Council tried to sell land with a water consent to a bottled water company.

Organiser Jen Branje won that battle, and is now asking for a moratorium on all water exports until protections are in place by law to stop private profiteering of water.

She talks to Guyon Espiner...