The weather gods rained down on Westpac Stadium, but were held by back by the greater force. Guns N’ Roses the unrivalled stadium rock metal act that dominated the 80s and 90s wowed a soggy Wellington crowd on the first leg of their Not In This Lifetime New Zealand tour. RNZ Music's Yadana Saw was there, and brings us this review: 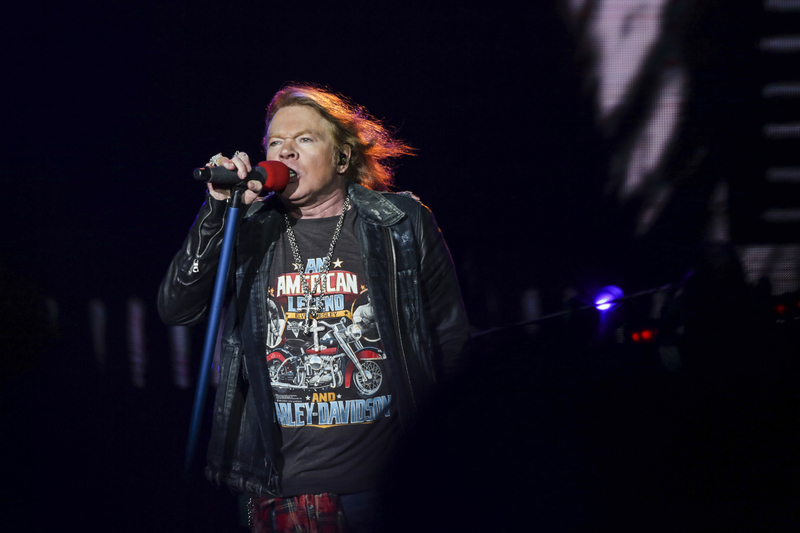 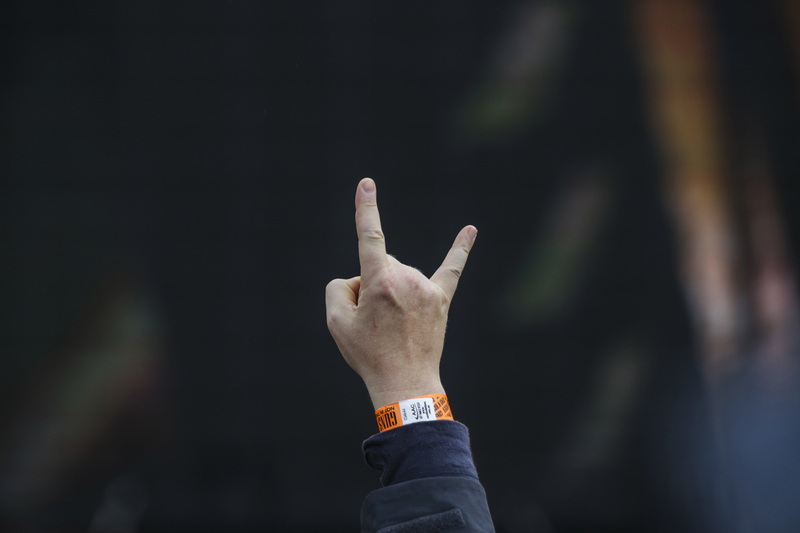 Fans wait for the show to begin. Photo: Rebekah Parsons-King 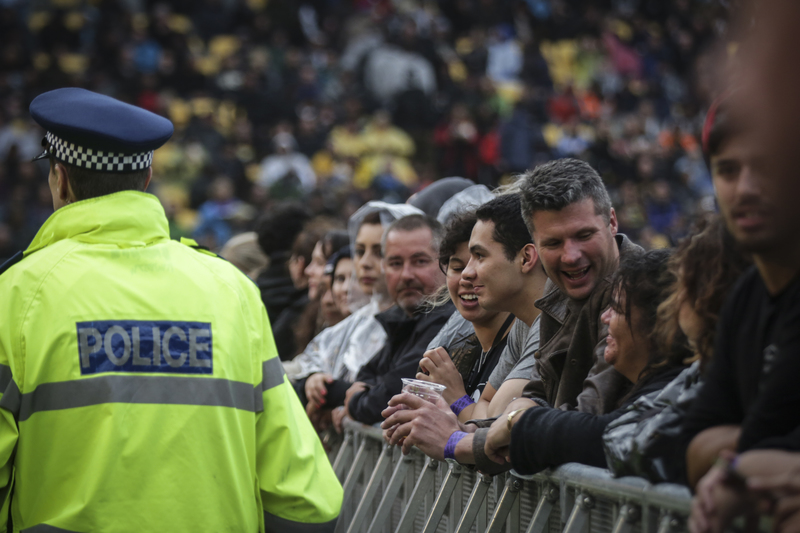 Despite the weather fans are all smiles. Photo: Rebekah Parsons-King 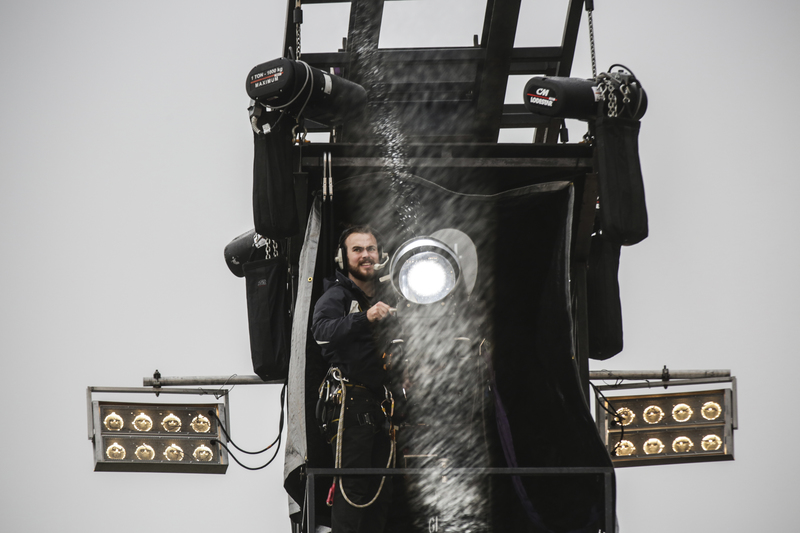 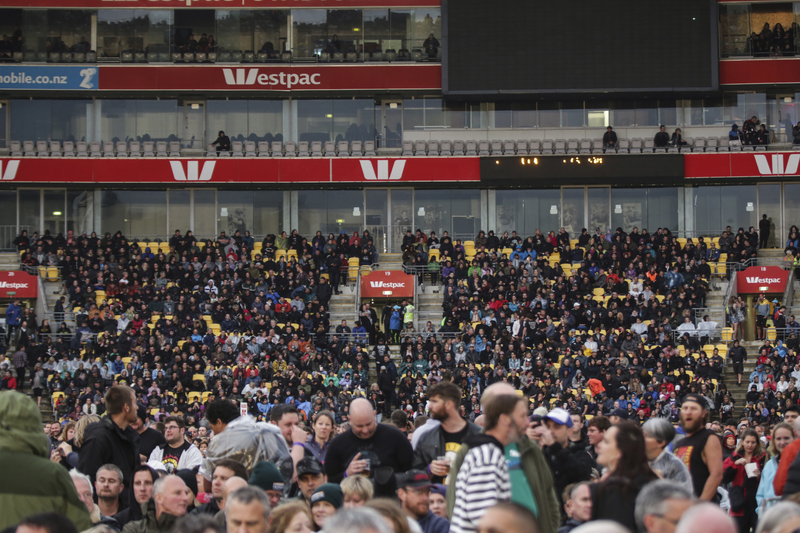 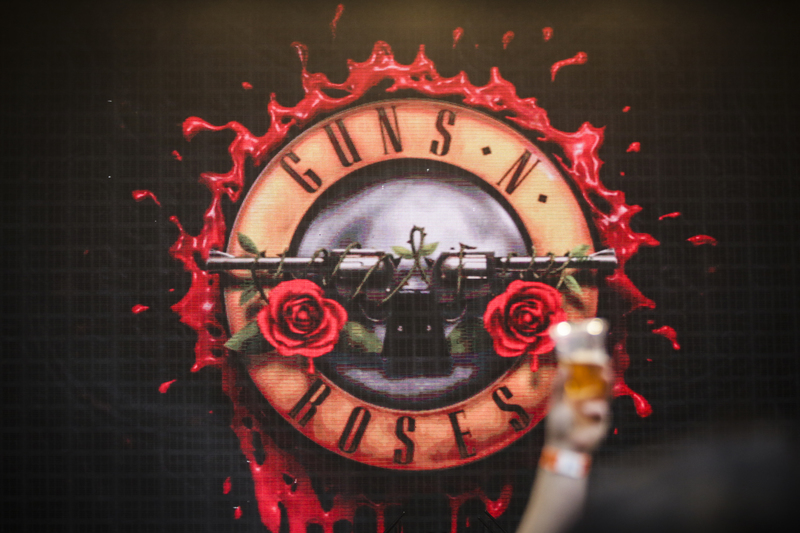 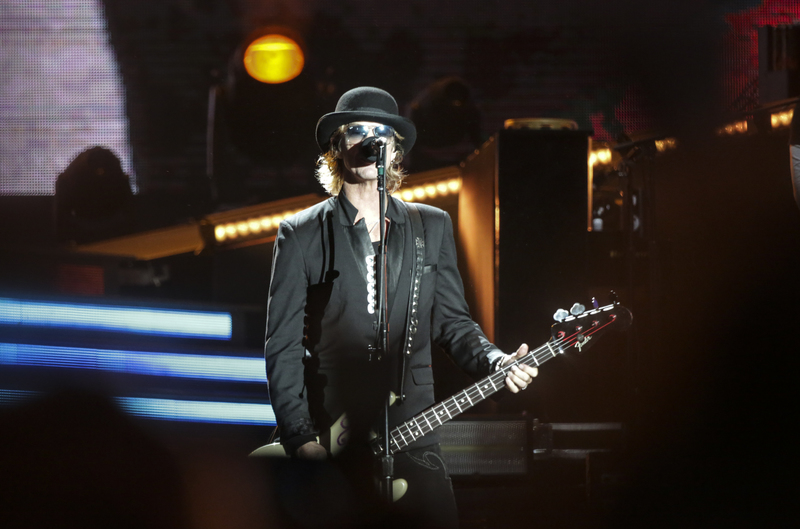 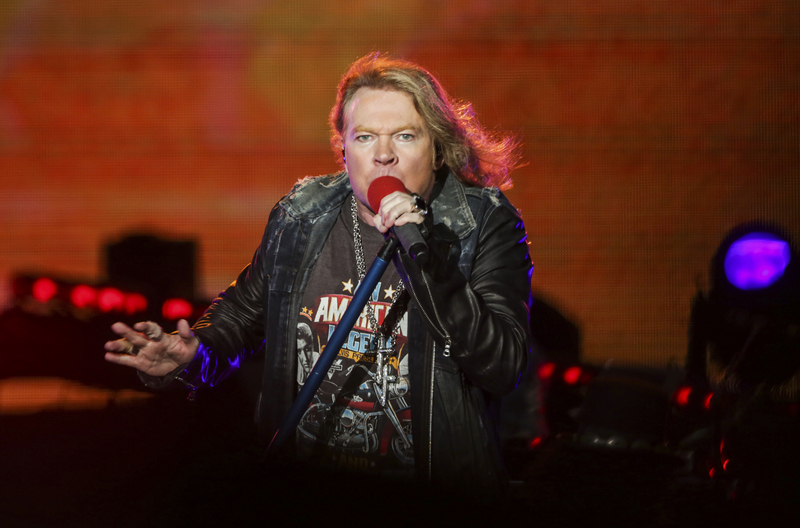 Axl Rose performs one of the bands many hits. Photo: Rebekah Parsons-King 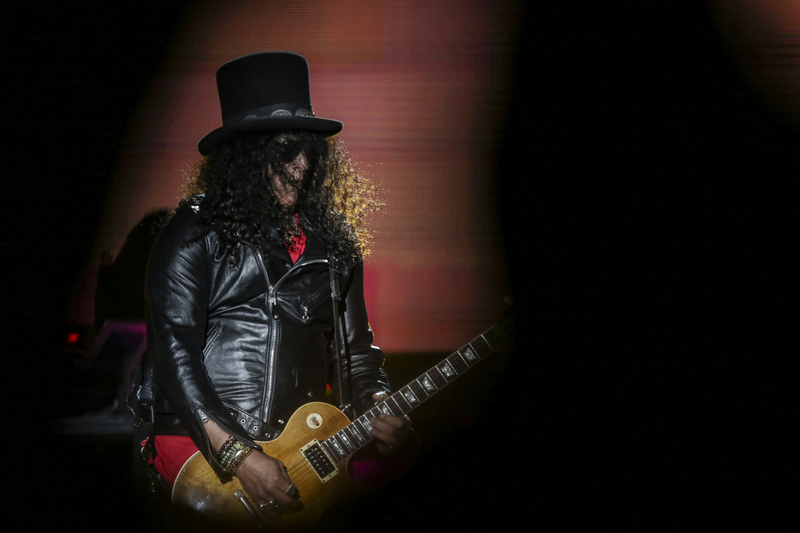 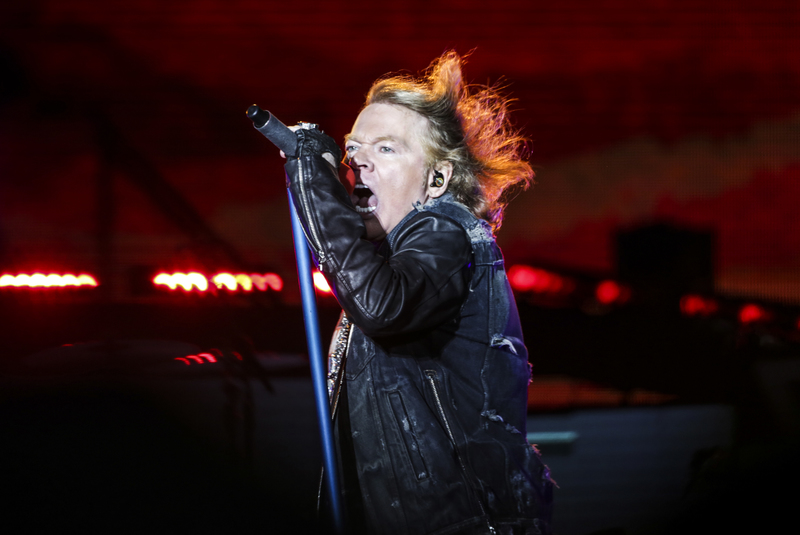 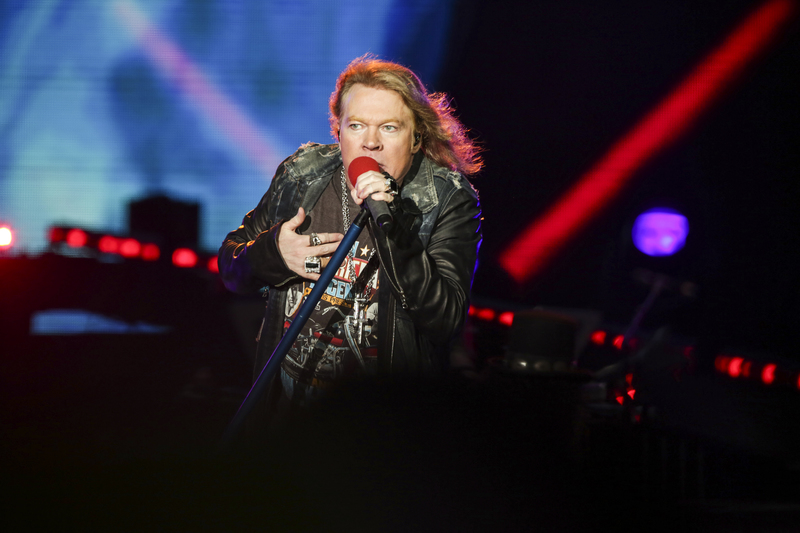 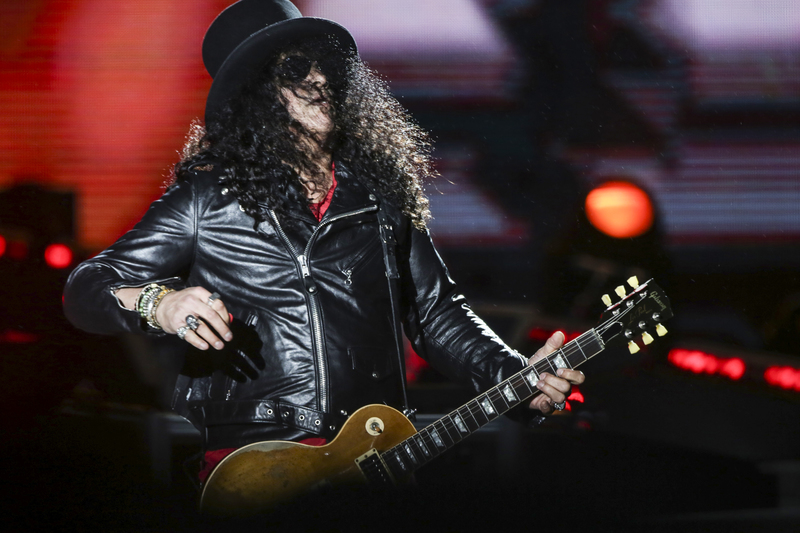 For a band “who put the ‘punk’ in punctuality”, the 45-minute wait for them to get onstage came more from weather-related safety concerns than the notorious excesses of their earlier touring antics. 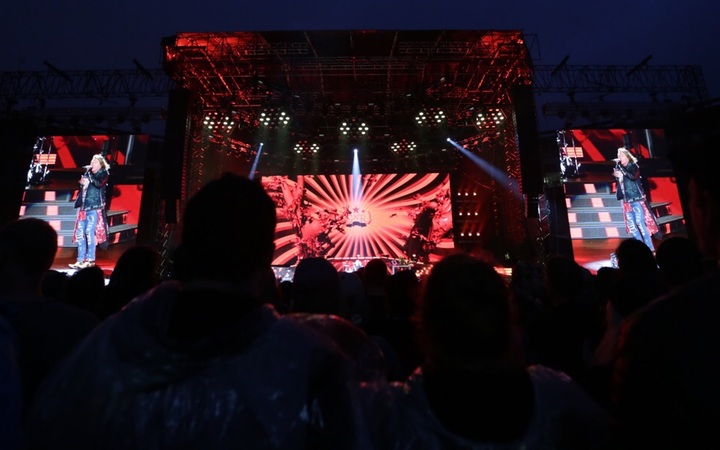 The show opened with ‘It’s So Easy’ which set the tone for how the rest of the 3 hours would unfold.

The core band were supported by Richard Fortus on guitar, Melissa Reese on synths, Dizzy Reed on keyboards and a blistering Frank Ferrer behind the drumkit.

Ferrer’s machine-gun percussion provided lethal timing and sharp accuracy to the rhythm section, who as Rose pointed out during the band introductions were, “the only one who stayed dry”.

These four players provided a solid sonic backdrop for original members, Axl Rose, bassist Duff McKagan and guitarist Slash, to give the fans exactly what they wanted.

It took a few numbers for the lead singer Rose to warm up, perhaps literally because of the persistent drizzle and swirling winds at Westpac Stadium.

But once G N’ R launched into ‘Welcome To Jungle’, the frontman awakened, strutting, swaying and posturing while the crowd similarly jumped to life. 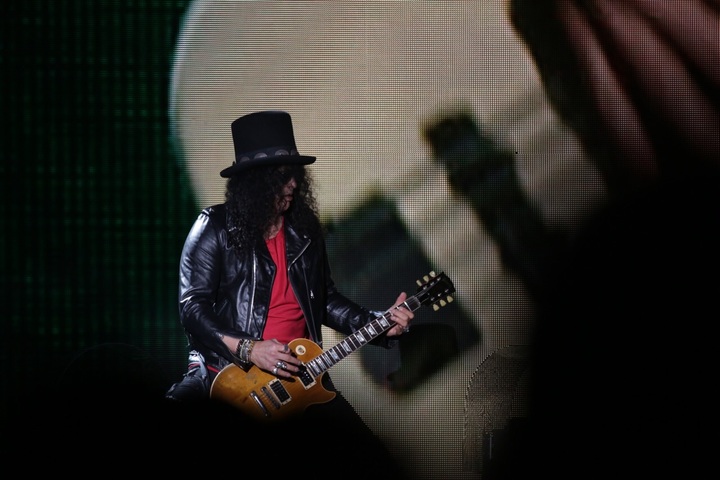 An extended solo by Slash during the next song, ‘Double Talkin’ Jive’, showed that the guitarist still has dexterity, melody and finesse in his playing. Stoic and unshowy, his virtuosity showed no strain throughout the night and provided essential lulls for Rose to make the first of his five costume changes - which were limited to a variety of Ed Hardy-esque t-shirts and jackets embellished with differing amounts of flair.

Full marks to Rose, as his take on couture grew on me over the night. Sure it wasn’t the early 90s white bike pants and unlaced Doc Marten boots, but it is refreshing to see a man in his 50s committed to a bold and individual style. Something some of his fans should take note of in their own dull and unimaginative attire.

For someone who has lived as hard as Rose, you could expect some wear and tear on his wide-ranging voice, in fact in the first few songs I was genuinely concerned as his vocals were a muffled and overpowered by the band. But as the night progressed, the frontman settled into the performance, even jokingly riffing a bit of ‘Singin’ in the Rain’ while the crew were mopping up damp spots on the stage floor. 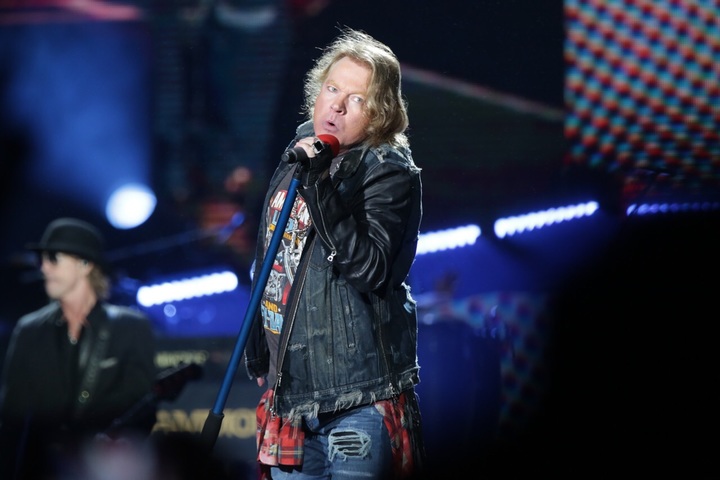 One could be cynical about an old rock act cashing in on former glories. Ticket prices range from $90 to over $600 and the tour has so far generated more than $US150 million.

Yet it is difficult to begrudge Guns N’ Roses when 30,000 soggy punters, security staff and me are singing along to ‘Sweet Child O’Mine’.

I’ve never owned a G N’ R album and I wasn’t aware their lyrics were so deeply ingrained in my head. This wasn’t even my favourite Gunners sing-along, which is ‘Don’t Cry’, performed during the four song encore.

This was a moment of complete cheesy stadium rock perfection: Slash fulfilling the iconic rock god snapshot, in the spotlight, hair blown by the breeze, showered with a fine sparkly mist of rain as he segued from his rendition of ‘Speak Softly Live (Theme from The Godfather)’ into the opening notes of ‘Sweet Child O’ Mine’. 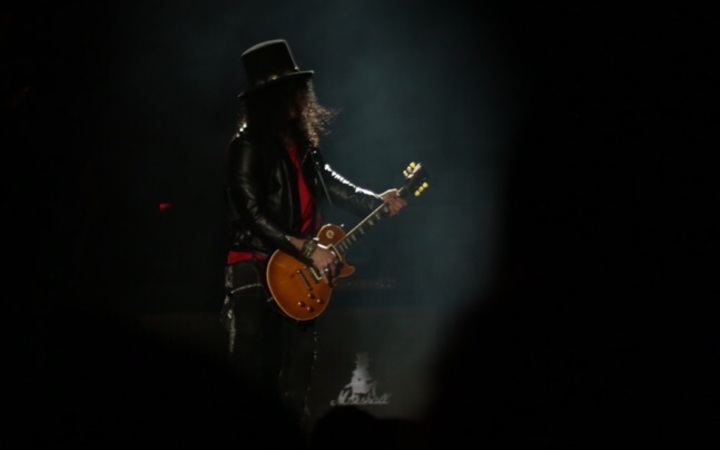 Other highlights included 'Live and Let Die', 'You Could Be Mine' and 'Used to Love Her'.

The show delivered, not only in performance and pyrotechnics, but also politeness when Rose thanked his hard working crew, “who put up this stage in the wind”.

In this lifetime I did not expect to be wowed by Guns N’ Roses, but it turns out It’s So Easy.

It’s So Easy, Mr. Brownstone, Chinese Democracy, Welcome to the Jungle, Double Talkin’ Jive, Better, Estranged, Live and Let Die, Rocket Queen, You Could Be Mine, New Rose, This I Love, Civil War, Coma, Speak Softly Love, Sweet Child O’ Mine, Used To Love Her, Out Ta Get Me, Wish You Were Here, November Rain, Knockin’ on Heaven’s Door, Nightrain, Don’t Cry, The Seeker, Paradise City, Far Away Eyes.