Groundswell took over about 70 centres nationwide - briefly and pretty peacefully - in last weekend’s Mother of All Protests. But the picture the media painted of who they really are and what they really want was confusing - and overlapping anger about the government and Covid-19 made the mix more murky. 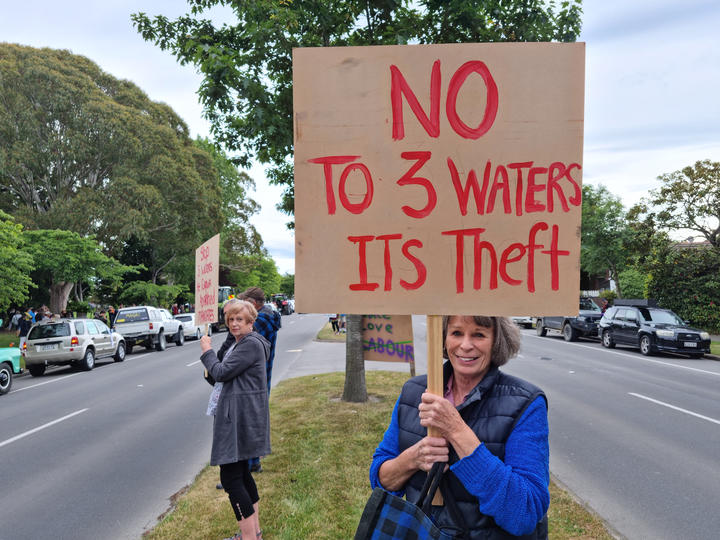 On the morning of the Mother of all Protests (MOAP) last Sunday, the host of Magic Talk’s Rural Exchange show Hamish McKay pleaded with what he called “the lunatic fringe" to give it a swerve.

“Idiots, racists, anti-vaxxers please stay away. Then the media can focus on what this protest is meant to be about,” he said.

But what the biggest nationwide protest in New Zealand for many years was actually all about wasn’t always obvious in the media coverage - a fair bit of which did focus on the fringe elements and statements.

It was similar last time with the 'Howl of Protest' in which off-message banners with slogans about communism, te reo, Donald Trump and Jacinda Ardern all got noticed - and amplified - in the news.

This time Groundswell published a list of approved slogans to raise the tone and sharpen the focus.

But the organisers and opposition politicians got rarked up in advance when government minister Stuart Nash reportedly dismissed Groundswell as “racists and anti-vaxxers”.

When asked by ACT’s Mark Cameron in Parliament last week if the government would consult with Groundswell on rural regulations they oppose so strongly the minister said:  "I'm not too sure what Groundswell stands for these days and that is what I have read on their website - It's a mixture of racism, anti-vax etc."

The ACT party’s primary production spokesperson, Mark Cameron, complained long and loud about that on Rural Exchange and in a press conference at Parliament - and calls for an apology from Nash echoed through until last Wednesday’s Mike Hosking Breakfast on Newstalk ZB.

On Newstalk ZB he clarified that what we had in mind was mainly a grotesque Facebook post featuring Nanaia Mahuta by a Groundswell organiser and dairy company director Ross Townshend -- but on and on it went: one minister, one opposition MP and a top talk radio host all arguing at length about one man’s shabby trolling on social media.

Groundswell claimed they wanted the focus on the rural regulations they say are unworkable, but the MOAP overlapped with anti-government and anti-vaccine protests held recently.

The Groundswell website urged people to take part by asking: Have you had enough of your freedom & rights being taken from you?

It also emerged the NZ Taxpayers Union lobby group - also campaigning vigorously in the media against the government Three Waters reforms - had a hand in the main MOAP website.

In an Newsroom article headlined The radical right in gumboots, researcher and writer Byron Clark claimed “conspiracy theorists appear to be trying to build a movement in rural New Zealand.”

He highlighted the Agricultural Action Group (AAG) founded on election night in 2020 by people from the unsuccessful Advance NZ party.

Clark said the AAG supported the Groundswell ‘Howl of Protest’ in July and has hosted meetings throughout provincial New Zealand.

There’s also been backlash against the group, he said.

Andy Thompson, host of The Muster on the Hokonui radio station recently warned disillusioned farmers not to - in his words - “buy into their crap”.

Byron Clark noted that the Clutha Mayor told the Otago Daily Times an AAG meeting he attended channeled the Sovereign Citizen movement in the US, including calls for people to "deregister as tax-paying citizens”.

At the moment these are people on the fringes, said Byron Clark, but he warned if these ideas gain influence within rural politics, it would endanger New Zealand and Covid-19 response and climate change action.

What next for Groundswell?

Newstalk ZB aired a paid statement in an ad break last Sunday afternoon during the MOAP in which Groundswell founder Bryce McKenzie urged attendees to follow the rules and disperse in an orderly manner.

But he also warned they would be back in the new year if they didn't get consulted on those "unworkable regulations”.

The prospect of that led RNZs midday rural news the next day, in which Bryce McKenzie dismissed consultation so far as “just lip service”.

But just moments later, RNZ’s bulletin reported on Federated Farmers' submission to the parliamentary committee reviewing the clean car discount - or ‘Ute Tax' - which is a big bugbear for Groundswell.

Farming is a huge industry with well-resourced umbrella groups and active lobbying. Farmers also own one of the biggest companies in the country - Fonterra - which also carries clout on their behalf.

On Scoop.co.nz Gordon Campbell wondered whether “Code Red levels of resentment inspired by the government’s Covid policy” might actually mean Groundswell has emerged at the wrong time.

“A hissy-fit arms race seems to be happening out there. Some of the disgruntled appear to be intent on outdoing one another in performative acts of rage,” he said.