In this week's Midweek Mediawatch, Hayden Donnell talks to Karyn Hay about a Cold War brewing between Newstalk ZB's political editor and the PM, misinformation in local papers - and the need for better oversight of opinion pieces. 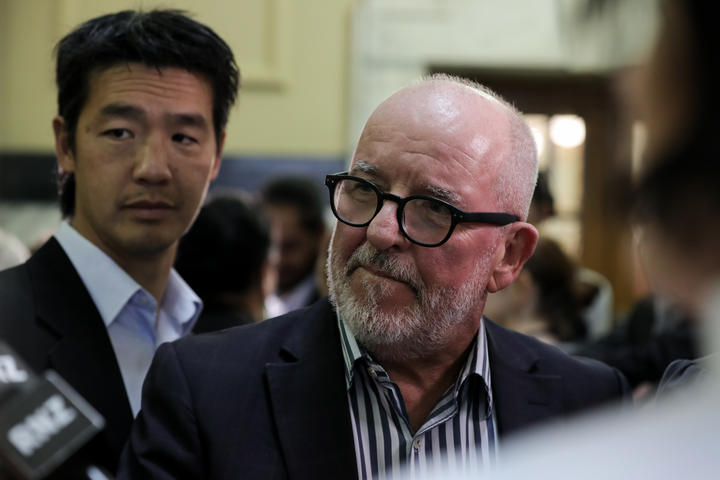 The explosion seemed to come out of the blue.

Prime Minister Jacinda Ardern was laying out the order of questions to reporters at Monday’s post-cabinet press conference when she was interrupted by the sound of muffled protests.

“I will come to Jessica, Barry, and then Jenna,” she said over the noise.

The protests grew increasingly insistent. They were coming from the direction of Newstalk ZB’s political editor Barry Soper.

“One quick question about Auckland,” the veteran journalist interrupted. “About Auckland!”

“Barry, I’m going to ask for a little decorum. Jessica, and then Barry,” she said.

“This is a press conference!” Soper yelled back, before walking out of the room.

Here's the video of Barry Soper having a tantrum and storming out of the 4pm presser today. Barry had already had 3 questions when other journo's hadn't had their first yet. pic.twitter.com/1TDfO8TxzA

The press conference went on for another 31 minutes, but Soper didn't attend, partly because he was busy writing an opinion piece about how the prime minister won't answer questions at press conferences.

"Press conferences with politicians generally have always been torrid affairs," he insisted in the piece, while harking back to his confrontations with prime minister Robert Muldoon nearly forty years ago.

Yahoo News wrote up the confrontation under the audacious headline ‘BIG SOOK: Journalist called out for 'embarrassing' press conference act’.

The report is comprehensive on the dust-up itself, but misses vital context.

Monday’s showdown wasn’t some isolated incident. It was a skirmish in a conflict that’s been simmering for months.

The first flickering sparks of the dispute were apparent in an opinion piece Soper wrote in March. It labelled Ardern the “master of soft, flattering interviews and television chat shows" and accused her of “blanching at tough questions”.

Worse, it was clear Ardern hadn’t treated Soper with the same deference as her prime ministerial forebears.

“All of her predecessors got to know the parliamentary media by inviting them to their ninth floor Beehive office, at least a couple of times a year. It puts a human face on the public performer. Ardern has done it once, a few months after becoming the prime minister,” he wrote.

Despite that warning shot, the tension between Soper and the ninth floor has been allowed to fester.

“We haven’t had Marc yet,” Robertson said, over the sound of Soper’s protests.

“This is a press conference,” Soper reminded the deputy prime minister.

Daalder later argued that he's "part of the press too, Barry" - a claim backed by the fact he's ably covered Covid and the climate over the last two years.

But has Daalder ever covered Rob Muldoon's drink-fuelled election 1984 campaign? Has he rubbed shoulders with Ruth Richardson or Bill Birch?

The answer is, of course, no.

Soper continued in a similar vein at last week’s post-cabinet press conference, fighting back when Ardern said she would take questions from both his Newstalk ZB colleague Jason Walls and Stuff’s Henry Cooke, before him.

“If I may Barry, I’ve already set out an order,” Ardern said above the sound of complaints. “I’ve bounced Jason twice.”

“I don’t know whether you heard her, she said ‘I’ve issued an order’,” he said, apparently conflating setting an order for journalists to ask their questions with issuing orders like a military general.

“This prime minister really has to get used to answering questions," Soper said.

Soper does have understandable concerns about politicians dismissing lines of questioning before journalists can build up a back-and-forth exchange.

But several of his press gallery colleagues have argued that their queries also count, and that answering them shouldn't be described as "refusing to answer questions".

Others still have brazenly put forward the idea that they're just as capable and qualified as Soper and deserve to be treated with more respect.

"If I was a journalist at a relatively time-limited press conference, I would simply not scream over my colleagues who are trying to ask their first question when I've already had several of my own, then storm off," wrote Newsroom's political reporter Sam Sachdeva.

But there’s one thing everyone can agree on: this week’s flare-up shows this crisis is only deepening. The chasm between the government and Soper is widening. The snubs, if anything, are becoming more egregious.

If Ardern doesn't make a correction, she'll be in danger of treating Barry Soper just like any other journalist -- and nobody wants to see that, least of all Barry Soper.