The risks of reporting displays of discontent - and amplifying aggro

Tuesday’s Covid protest at Parliament was a spectacle that had to be covered, but reporters who did so were targeted by protesters - and not for the first time. Does coverage risk ramping up the impression that resistance is more significant than it really is? And is the mounting hostility to the media a risk that editors and bosses now need to confront? 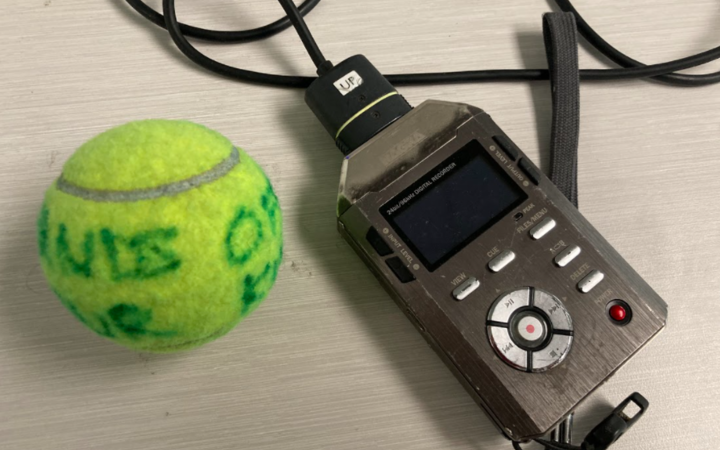 One of tennis balls hurled at reporters on Tuesday by protestors - with the message "Hands off our kids." Photo: photo / RNZ Mediawatch

Tuesday’s protest at Parliament was vivid - but the coming-together in the capital wasn’t exactly the Capitol riot in Washington back on 6 January.

For a start, no-one died and few people were looking for trouble.

It was also largely self-policed. When barrier fences were toppled by the more hopped-up participants in the frontline, other protesters popped them back up again, saving the actual police the bother.

But it was also unfocused.

Depending on which banner you read or which speaker you heard, it was an anti-vaccination, anti-lockdown, anti-coercion, anti-government event - but also pro-freedom, pro-sovereignty, pro ‘my-body/my choice’ (but not pro-abortion) and even, for a few, pro-Trump.

“Covidiots are responsible for many crimes - and murdering graphic design is near the top,” said publisher Vincent Heeringa - with tongue in cheek - mocking the standard of placards on display.

But there was a definite edge of menace and anger among some people, as well as ample evidence of extreme ideas and disinformation surging though social media.

Some protesters deployed fascist insignia and insults to make a point too. (See Phil Smith’s photo essay for evidence of Reductio ad Hitlerum on display).

And sometimes the media were the target.

When Stuff’s chief political correspondent Henry Cooke asked for an explanation, the man carrying it told him to “look in the mirror,” although ‘swastika man’ himself wouldn’t look into TVNZ’s camera when confronted at that protest.

When @henrycooke made an attempt to interview this protestor today here's what the prostestor had to say... #NoComment ‍♂️

Reporters at Parliament were pelted with tennis balls daubed with political and anti-vax slogans. Some were struck painfully in the head and upper body.

Newstalk ZB’s Jack Crossland reported that the man who hurled ‘Agenda 2030’ and ‘Poison Jab’ balls at him asked for them back.

When it was all over, RNZ’s Jake McKee tweeted:

“I know it might seem trivial, being bombarded with tennis balls . . . but technically, that's assault,” said Richard Sutherland, RNZ’s head of news and the deputy chair of the Media Freedom Committee representing the mutual interest of our news media.

“Put yourself in the position of a reporter who's standing there in front of a sea of people and many of them accusing you personally of being a traitor and an enemy of the people - and they are throwing things at you,’ he said.

“I don't think the media should have to go to the organisers of these demonstrations and say: ‘Please tell the people that you are encouraging to come to these events to act in a lawful manner.’  I'm not here for that at all,” he said. 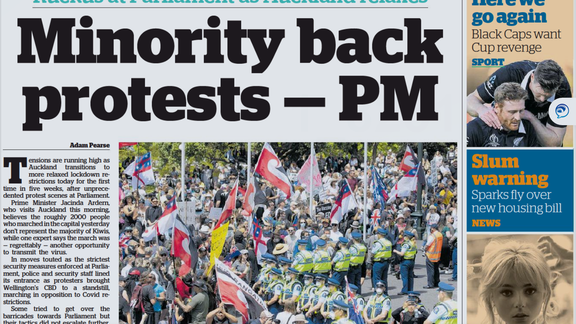 Soon after, the PM told reporters the protesters did not represent the vast bulk of New Zealanders.

Her associate health minister Dr Ayesha Verrall pointed out many more people than those protesting at Parliament would turn up to vaccination centres around the country to get the jab on that same day.

TVNZ 1 News at 6 made that point on Tuesday night - and in her report, TVNZ political editor Jessica Mutch-McKay intercut the telegenic scenes of the colourful protest on the doorstep of her workplace with commentators pointing out what had propelled many people to Parliament in the first place - malicious misinformation.

The rally wasn’t the only one making breaking news on Tuesday.

Even before a police officer was bitten by a protester at the northern Auckland road border, the New Zealand Herald site had announced the traffic blockage with a bright-red breaking news banner.

Reporters on the spot later confirmed the protest was initially about 40-strong -- but dropped down to around 10 people by the time it made headlines.

On Saturday, Newshub labelled the largely ineffective 'Great Gridlock' protest as "yet another weekend of outcry". 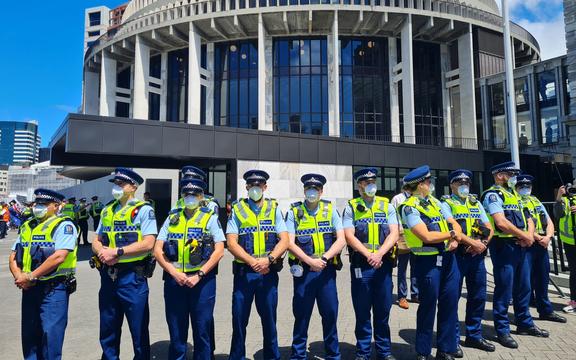 So does the media risk amplifying such vivid displays of discontent - and giving the impression resistance and anti-vax sentiment is more widespread than it really is?

“Credible news organisations generally don't generally give much oxygen to two or three people with delusions who have got cardboard signs standing on a street corner. When it gets to the point where you have several thousands of people walking down Lambton Quay to Parliament, then obviously you have to report it,” Richard Sutherland told Mediawatch.

“And you have to report why they're there - and then you have to leave it up to the audience to decide what they think of that,” Sutherland said.

Reporters said protesters complained to them that media have been bought by the government to do their bidding. Some even referred to the government’s Public Interest Journalism Fund introduced this year, providing $55m for ‘at risk’ journalism.

“That's just absolute nonsense - and actually kind of insulting. The media is not that organised and - to be honest - neither is government,” Sutherland told Mediawatch.

“RNZ is completely funded by the taxpayer already - and that does not in any way affect our reporting of the government of the day. You can ask any government how they feel about some of the questions they get asked by RNZ journalists," Sutherland said.

"They will tell you that if they were paying us not to do that they're not getting value for money, because we certainly do not factor that into our thinking at all. Neither does the commercial media sector, some of whom have had successful applications to the PIJF,” he said.

‘No jab, no job’ opposition complicates the issue

One of the triggers for Tuesday’s rally was the belief vaccine mandates could create a 'two-speed' society. (Hence the misguided and offensive Star of David appropriation by some protesters).

While only a tiny minority took to the streets to rail against them and jeopardise their jobs, vaccine mandates are a legitimate news issue right now.

On RNZ’s Morning Report the same day,  Air New Zealand chief executive Greg Foran confirmed the airline would fly unvaccinated people around the country if they got a negative test - because he “didn’t want anyone left behind.”

Also on Tuesday, RNZ’s John Gerritsen reported the entire staff and board of governors of a small King Country school would still be unvaccinated when next Monday’s deadline came into force.

And Stuff reported that morning the government fears a vaccination mandate for police could lead to roughly 1200 officers being pulled from the job.

The risks to reporters ramping up? 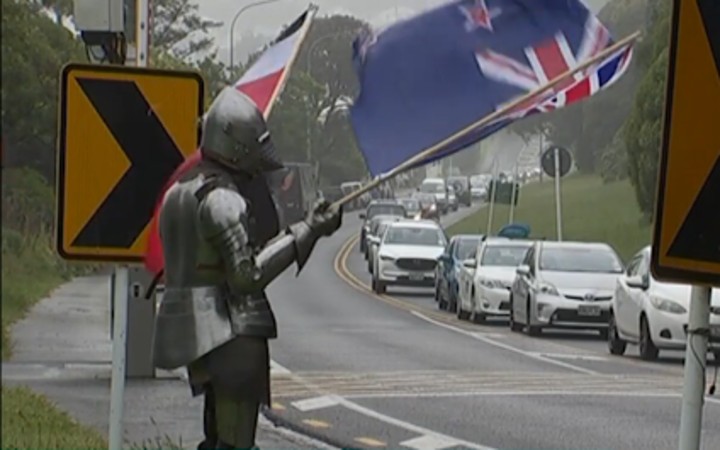 A protestor confronting traffic on Saturday in Wellington - in full suit of armour. Photo: screenshot / Newshub at 6

“On the face of it, being in the way of a few tennis balls lobbed at Parliament might not seem like a major, but it's a further escalation,” said Richard Sutherland.

“We are all of the view that there is an increasing level of aggression towards journalists from people who are opposed to either the vaccine rollout or the vaccine mandates or the Covid restrictions. What might have started a few months ago with journalists being verbally abused has escalated,” Sutherland said.

The anti-media mood right now is more than a matter of those tennis balls at Parliament on Tuesday.

A Stuff photographer was grabbed and abused by marchers in the capital’s CBD - and Newstalk ZB’s Jack Crossland said he was told to lie down in front of the moving motorcycles he was photographing.

A TVNZ camera operator was attacked by anti-vaxxers while filming a vaccination event in Greymouth last weekend.

So this happened to our cameraman today... pic.twitter.com/rL6iWTHt5Z

Last week, a far-right conspiracy theorist with fake media credentials disrupted a press conference to heckle the Prime Minister - who then called a halt to it.

"As a journo I have always felt safe at protests. Most understand we have a job to do but the "Freedom and Choice" protests feel different", Hui host Mihingarangi Forbes tweeted.

The day before Tuesday’s protests, Newstalk ZB’s political reporter Jason Walls warned the media should brace for more abuse from “the 10 per cent or so yet to get the jab” who, he said, seem to be united by their distrust of the government and the mainstream media.

“I am concerned, as someone who has to oversee a news operation that sends people out into the field every day, that one day someone is going to assault or attack and seriously injure one of our staff - or worse,” Sutherland told Mediawatch.

He said media organisations catalogue all instances of threats to the safety of their journalists.

“We can act individually as good employers, but . . . what are we doing as a society to make sure that we are respecting journalists and the work that they do, going about their lawful business? That's where the information that we're collecting as individuals will come into play,” he said.

“As more and more people get vaccinated, I would hope that this thing will subside. But you know, the veneer of civilization is quite thin on some people so I wouldn't count on a sudden restoration of civility and good behaviour,” he said.

“The polarisation that we're seeing in the US and elsewhere, primarily fueled by social media, is already here. It's just a question of how bad is it going to get - and I wish I knew what the answer was to combating it,” he said.

“As journalists, all we can do is report in a fair way, and in a balanced way, what is going on in the country . . . while keeping our people safe,” he said.

“If you don't keep an eye on these sorts of things when they're just starting to grow, then maybe 10,15, 20 or 30 years from now we are issuing our journalists with hard hats and flak jackets as they go out to cover a routine demonstration because we just don't know what's going to happen,” he said.