Pressure piling up on tech titans - Australia leading the charge

Big tech platforms have failed to tackle the misinformation and toxicity they spread - and their dominance of the market for digital media revenue is becoming increasingly obvious. Australia's government has confronted them on both fronts and the news media have benefited. Can others - including ours - follow their lead? 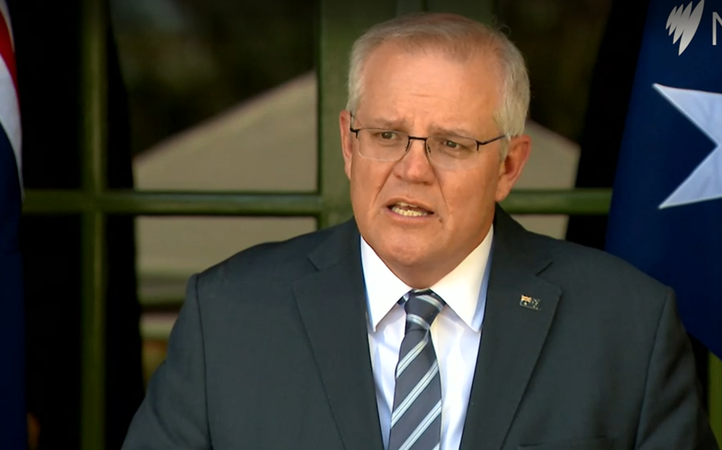 Last Monday, RNZ’s Conan Young was out and about in Christchurch asking people about the threat of Covid-19.

One woman who worked for a construction company with about a hundred employees told him the unvaccinated were a problem for business like her’s - and blamed online misinformation.

“People don't realise the cost to business owners of not getting vaccinated - and thinking the be-all and end-all of information is Facebook. Where are you getting your information? Facebook? Instagram? Or a scientist?” she asked.

She declined to state her name or the name of her business - possibly because she was just a private sort of person, but maybe because she feared a backlash via social media from the people she was talking about.

And that’s not an unreasonable fear these days.

In a long reflection on the power of big tech platforms published last week, The Spinoff’s managing editor Duncan Greive noted anti-vaxxers were spamming the Facebook stream of a 1pm press briefing with vaccine falsehoods while the PM herself was urging people to get the jab ASAP because the number of first doses had began to fall worryingly.

Where’s the moderation at Facebook  - the intervention that could stop this from happening? Not here, it seems.

Most of Facebook’s human moderators are focused on the US. Duncan Greive asked Facebook where its moderators for New Zealand were, but the only response was a statement from a nameless Facebook company spokesperson:

"Our content moderation approach is global, operates 24/7 across multiple time zones, and in many different languages."

Duncan Greive concluded Facebook and the search titan Google - two of the biggest and most profitable companies the world has ever known - operate here “with less regulation than the average local takeaway or taxi firm”.

His article - just like the worries of that anonymous construction company woman in Christchurch - wouldn’t have bothered those at Facebook’s top table.

But they were worried when Frances Hougan, a former employee from Facebook's own anti-misinformation team - testified in the US Congress recently and went public on 60 Minutes.

An earlier set of leaked internal documents published by the Wall Street Journal - The Facebook Files - also showed the social network knew all about many of the ill effects it creates.

Mark Zuckerberg countered by claiming Facebook spends more on research and safety than even bigger companies like Apple, Microsoft and Google.

But for all of them, the pressure to act meaningfully on misinformation is growing. 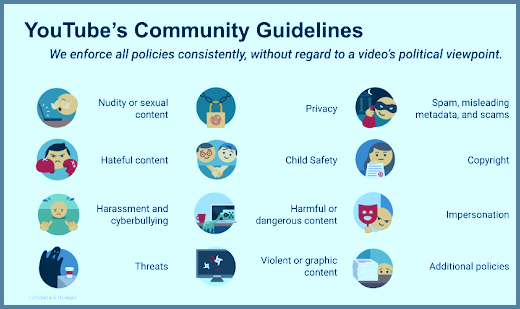 It was a closed meeting so participants can’t be quoted verbatim, but Google officers reiterated the company’s core mission - to index the world information for us all, regardless of political viewpoints - and insisted the vast bulk of it is harmless.

But Google also owns the world’s biggest video sharing platform YouTube. That houses millions of hours of fact-free comment and claims that are algorithmically boosted to millions of fresh eyeballs, along with the often toxic text comments that accompany them.

Participants were told 20,000 people worked on misinformation detection - and over the years Google had invested $1 billion in moderation.

Google staffers also pointed to partnerships with respected news organisations like the Associated Press and official outfits like Election Commission of India.

They also said efforts to counter manipulation and SEO were improving too - and that Google often goes the extra mile to prevent harm.

One example given was action against the growing number of bogus or poor quality rehab centres in the US targeting vulnerable people searching Google for addiction treatment options.

Google severely restricted the number of rehab-related search ads in late 2017 and rehab facilities saw a 96% decline in the reach of ads afterwards.

Google resumed ads for certified rehab facilities last February but only for businesses which completed a certification programme that cost each one around US $3000.

But while this intervention had a good effect, it also illustrates Google’s overwhelming dominance in those online  ads- and the responsibility that comes with great power.

In Australia the government has confronted that dominance - and the conduct and content of Facebook and other online platforms.

“They’re not a platform anymore. They’re a publisher,” he said.

Australia is also the first country to use competition laws to force Facebook and Google to pay for the news media’s content.

Back in February, Facebook packed a sad over that and pulled news off the feeds of Aussie users - but only for a short time. Google, by contrast, started doing confidential deals with news publishers to pay for carrying their content.

Major and medium-sized media companies are using the income from the News Media Bargaining Code to expand and to hire more journalists.

Journalism expert Andrea Carson from Melbourne’s La Trobe University published a major report on misinformation in this part of the world earlier this year (funded by Facebook itself) - and she also took part in Google’s summit on misinformation last week.

This week Prof Carson published a new analysis of that groundbreaking deal stuck with Australian news media - The Grand Bargain - in which she says says big tech’s hold over the media industry may be set to change. 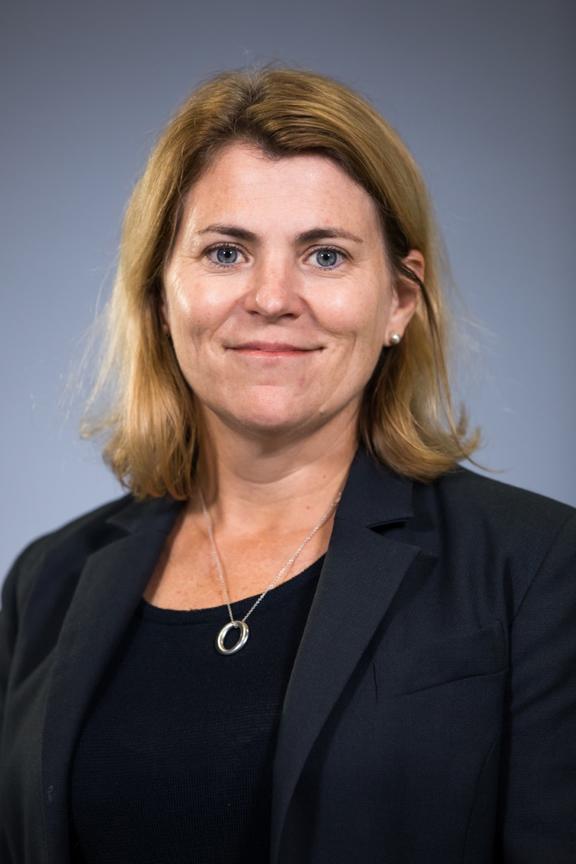 Andrea Carson; Associate Professor in the Department of Politics, Media and Philosophy at La Trobe University in Melbourne. Photo: supplied

“It is clearly a problem for democracies globally how you manage this unregulated space that enables digital platforms unprecedented market share of advertising - and to be a conduit for misinformation and disinformation. But I think the answer in Australia really lies with the fact that we have Rupert Murdoch’s News Corp as a dominant media player,” Prof Carson told Mediawatch.

“Murdoch and his publications have been putting pressure on the government for some time to address the growing market share of the big technology companies. This led to the government ordering an ACCC (Australia’s Commerce Commission) inquiry.

"In 2017 that reported back recommendations including Australia establishing a news media bargaining code to get the companies to pay for third-party news content on the websites. The other component was a code of practice for the platforms on how to manage misinformation and this information,“ Prof Carson said.

Facebook is as popular and profitable as ever even after previous scandals such as Cambridge Analytica. Will the current revelations and the Facebook Files make a mark?

“I think it has a cumulative effect and what is particularly important about these allegations is that it’s young people at the heart of them. That’s why we’ve seen a greater call to action,” she said.

“The global spread of online misinformation has the potential to erode foundational elements of modern civilisation. Misinformation surrounding reporting on Covid-19 has exposed the broader potential of information disorder on the internet to jeopardise public health and safety.”

“It’s great to see the companies engaging with the problem. But I think there’s always more that can be done because this is a global problem that’s not going away,” Carson said.

“It’s not a problem that can be solved on just one platform,” she said.

Many of Australia's digital platforms have signed up to a voluntary code of practice that covers search engines and platforms that accommodate user-generated content but excludes private messaging services, email services and excludes WhatsApp, Weibo and other popular messaging platforms.

Some governments in this region have gone further than Australia to hold them to account.

“Singapore and Indonesia have actually legislated against fake news, but the government gets to determine what is fake news and how they respond to it. When you give government so much power, the targets of those laws have largely been journalists and political opposition,’ Prof Carson said.

But now that we have a crisis of Covid proportions, does it come in handy to have a blunt instrument like that?

“Some of the policymakers would say so and (the Singaporean law) has captured some claims about harmful treatments and efficacy of vaccines. But there were already laws in place that could have dealt with that without the heavy-handed approach of anti-fake news laws. Singapore is currently debating a law that could go even further,“ Prof Carson told Mediawatch. 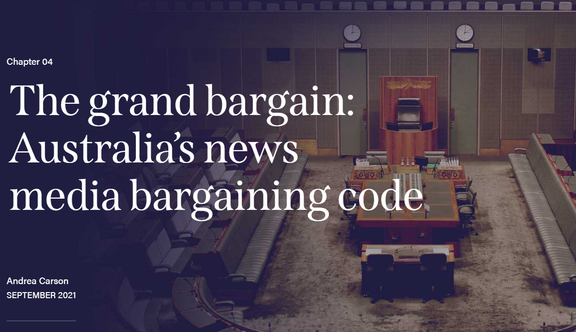 The Australian arm of The Guardian and state-owned broadcaster SBS have recently hired journalists and launched projects using income from Google and Facebook secured by their News Media Bargaining Code deals.

“This is a really new development. So far there have been 14 deals done between media companies and Google  - and 11 with Facebook,” she said.

“The problem with the code  . . . is picking in choosing who gets to do a deal with a big tech companies. You have to have an income of $150,000 for three out of five previous years so small companies and start-ups are excluded,” she said.

“The Conversation - a university-funded public interest journalism service - has been excluded by Facebook - and they’re pretty unhappy about that – but Google has done a deal with them.,” she said.

“News Corp has been slashing jobs and they have been enormous beneficiaries of the code. Media reports that are fairly reliable suggest that they have made around AU$30 million out of the deal - but that is not necessarily translating into public interest journalism. So we need to watch this code really closely to see who gets to do the deals and whether it translates into public interest journalism,” she said.

Here the government has addressed the deficit in public interest journalism with a $55 million fund of public money. Critics complain it creates an unhealthy dependence upon government largesse.

“I hope there is a contagion effect and big tech does take responsibility and support quality journalism in other countries. There’s been interest also from the UK, Canada and even the US in adopting something similar,” she said.