Government plans to reshape public broadcasting have been going on behind closed doors - but the future role and scope of it have been aired in one forum: the review of RNZ’s Charter. In hearings that ended this week, commercial radio bosses urged MPs to rein in RNZ’s efforts to attract new audiences - and to scale back efforts to make public media 'bigger.' 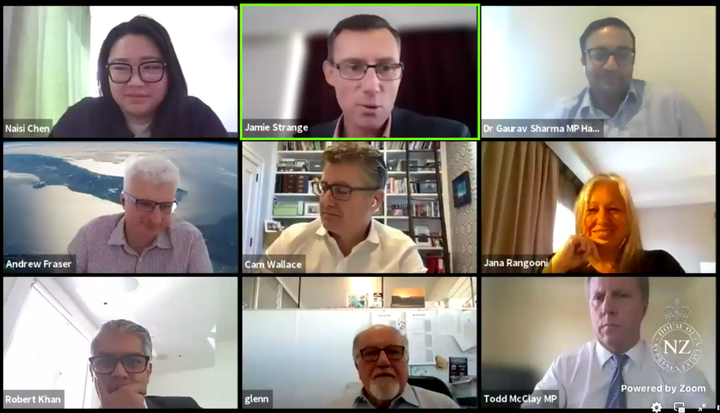 At exactly the same time MediaWorks said the same survey showed a record 2.5 million people were tuning in nationwide every week to its radio networks.

Impressive results - and intimidating for rivals.

The following day non-commercial RNZ reported a slide in its listenership, but the commercial broadcasters fear RNZ’s ambition to reach more - and younger - people in future.

In 2019 RNZ set a goal - approved by the Government - of reaching one-in-two New Zealanders and building a “life-long relationship” with them. RNZ said that couldn’t be done without “attracting additional new diverse audiences.”

RNZ also has a charter to govern its output and strategy that’s enshrined in law - the Radio New Zealand Amendment Act 2016.

The charter’s five-yearly review was due last April, but at the time the broadcasting minister Kris Faafoi tried to put the review on hold because he had just appointed a group to draft a brand new charter for a new ‘public media entity’ - the main plank of his government’s Strong Public Media Programme.

RNZ’s ill-fated plan for a new service for younger people caused a major controversy last year because RNZ Concert would be taken off its FM frequencies to accommodate it.

That prompted many of the submissions to the current RNZ Charter review published by Parliament last month.

Some wanted more and better classical music broadcasting written into a new RNZ charter - and some pleaded for more independent news and better presentation and pronunciation standards.

RNZ’s own submission only suggested a tweak to embed principles of Te Tiriti o Waitangi and scrubbing references to RNZ as a “public radio company” now that it’s a multi-media digital operation.

But submissions from other media companies expressed deep concern about RNZ expanding at their expense.

During a subsequent series of hearings beginning in August, the message from the commercial radio industry was loud and clear: RNZ was straying out of its lane - and into theirs.

“The government doesn't fund supermarkets or petrol stations - or any organisations unless there’s a real public need," Jana Rangooni, the CEO of the Radio Broadcasters Association (which represents the mutual interests of commercial radio broadcasters) told the committee.

"The Charter outlines a lot of content RNZ needs to produce that we couldn’t. But . . . it's very easy to want to grow bigger and behave in more commercial ways than a public broadcaster should,“ she said.

She told the committee offshore tech platforms Google and Facebook were taking an increasing share of advertising revenue - and she described RNZ’s effort to launch a network targeting young people as “a huge attack.”

She also told MPs her members hadn’t forgotten an RNZ ad campaign last year that talked up its own output and - in their eyes - put down commercial media.

Cam Wallace - CEO of MediaWorks and the current RBA chair - told the committee they wanted the Charter to set firmer boundaries for RNZ‘s activities and guide the management.

When that was put to RNZ’s chief executive at last Thursday final hearing, Paul Thompson replied: “It's a question of choice - not that we want to crowd anyone out. Of course they would say that. That's a consistent piece of feedback they will give, but what we do is quite different."

It’s certainly a consistent message in the RBA’s written submission (PDF) to the Charter review, which argues RNZ is trying to boost its audience at the expense of their business.

“RNZ should be serving content and audiences that the market cannot serve as it largely does now,” the submission insists.

A ten-page lawyer’s letter attached to it - dating back to the height of the RNZ Concert / new youth network controversy in March 2020 - claims RNZ and its management were not acting in regard to its own charter and to the detriment of the wider radio industry.

“There is a philosophical discussion that has to be had about whether RNZ wants to reach all New Zealanders - or whether it wants to be a great public broadcaster that reaches a lot of New Zealanders, which I don’t think we have any problem with,” Jana Rangooni told Mediawatch.

“Google and Facebook have changed the landscape. If we lose audience to anybody, we lose revenue to those two competitors. That’s probably why we are super-sensitive perhaps in ways that we weren’t 10 years ago,“ she said.

“The majority of what RNZ does . . . in many cases wouldn’t be commercially viable to produce.  But what’s concerning us is stakeholders that are judging RNZ’s performance on audience goals ahead of - or on-par with - its charter delivery,” she said.

“Looking to the future there look to be more areas of concern,“ she said.

The bitter battle over new listeners 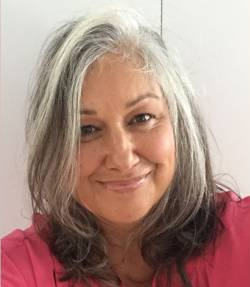 At the very top of that list was RNZ‘s stalled plan for a youth network, bitterly opposed by the commercial radio industry when it was announced in February 2020 - along with calls to release FM frequencies earmarked for youth radio for almost 25 years.

After all the controversy, RNZ is now planning an online-only service called ‘Tahi.’

“You say that the youth radio plan is dead but we want to make sure that it is - because it would be incredibly damaging to our industry,” Rangooni said.

“We want to make sure that things like this are never even considered in the first place. There is a naivety on some people's part about the impact it would have on the sector,“ she told Mediawatch, citing the popularity of the ABC’s long-established FM station Triple J in Australia.

But in radio news, people do have a clear choice here.

They can consume cornflakes and commercials with Newstalk ZB’s Mike Hosking or the AM show on Magic Talk between 6 am and 9 am. Or they can hear Morning Report on RNZ National uninterrupted by ads.

Its charter also obliges RNZ to “recognise the interests of all age groups" and "stimulate, support, and reflect a wide range of music.” So why shouldn’t younger people have a similar choice from RNZ networks offering music aimed at them?

“If you’re looking at growing younger audiences, even the commercial operators aren’t creating more FM radio stations. Most of us are looking at what we can do in the digital space – podcasting streaming services,” said Rangooni.

The RBA's submission also claims a new youth RNZ network would not be "an entry level drug" to attract younger lifelong listeners - because of the huge differences with RNZ Concert and RNZ National.

“The Charter takes account of services already available in the marketplace. Public broadcasting is not (about replicating) what is already in the commercial market - just without commercials. It is about producing more valuable and often resource-intensive content that can’t be provided by the commercial sector," Rangooni told Mediawatch.

A bigger beast on the horizon 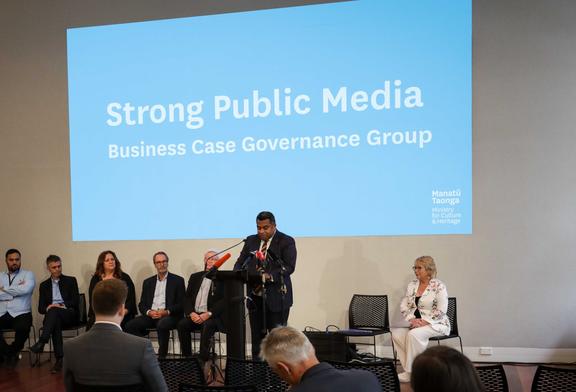 The Strong Public Media Business Case Governance Board will oversee the completion of a business case into forming the entity. Photo: RNZ / Nate McKinnon

“It is more important than ever any such entity is only allowed to evolve in an ecosystem that also includes healthy local commercial players,” chair Cam Wallace said in the RBA’s most recent annual report.

Earlier this year the broadcasting minister said the business case would consider how it would “collaborate with and complement the work of private media”. Advisors appointed by the minister have also consulted commercial media this year while drafting a charter for the new entity.

Is the RBA lobbying for a charter to limit the scope of the new beast?  Would it ‘go legal’ if the as yet-unseen new charter broadens its scope?

“It’s hard to say what action anyone would take until (we) know what is actually put forward. The challenge isn’t about stopping a public media entity growing audiences. It’s about growing at the expense of the commercial sector which it does not need to do,“ she said.

Parliament’s EDSI committee will now consider the submissions and evidence from the recent hearings and report to Parliament.

But by then, it is probable Cabinet will have considered the business case for a new Public Media Entity and the draft charter for that.

The review of RNZ’s Charter may end up a redundant exercise, but - unlike the planning of the new entity - the debates over the scope and purpose of public broadcasting that took place were not hidden from the public.