A year ago, a trial of armed police teams was scrapped with opponents adopting the slogan ‘Arms Down.’ One year on, some in the media are now amplifying calls for arming all officers after the death of PC Matthew Hunt and an increase in officers being confronted by guns. 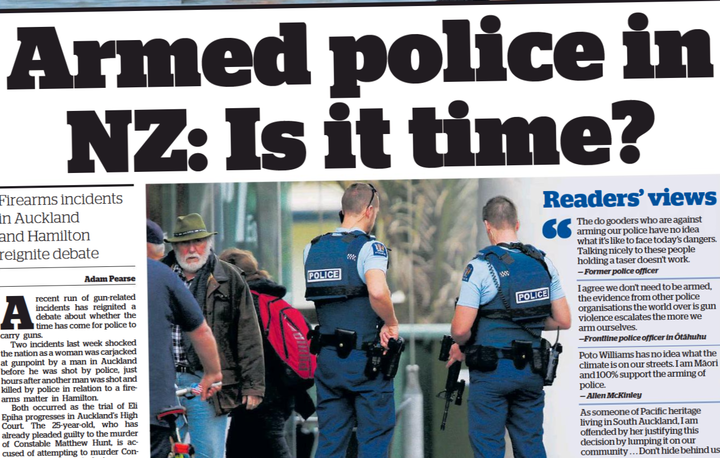 Epiha had earlier pleaded guilty to killing officer Matthew Hunt at the same time after the pair had tried to stop Epiha’s car  in June last year. 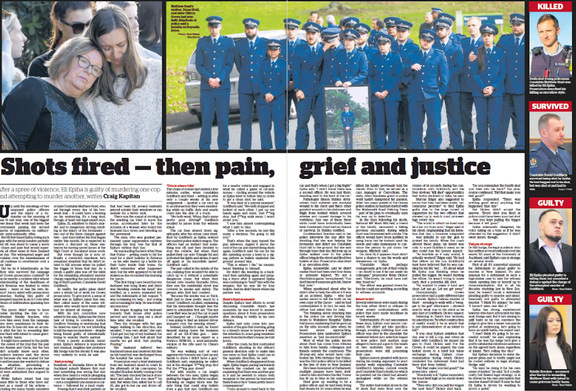 The New Zealand Herald that day carried compelling reporting of the trial across four pages - with the grief of the family of Matthew Hunt front and centre.

"The past two-plus weeks have been harrowing for all of us,” Matthew’s mother Diane Hunt said to the media outside the court.

During that two weeks, parts of the media put arming the police front and centre too.

While the Epiha trial was under way on July 15, TVNZ reported officers have had a gun pulled on them  - or have been shot  - at least 44 times in the past two years. An unnamed serving officer gave TVNZ a chilling first-hand account of their fears.

“We’d have to be pretty careful about that because the population of New Zealand doesn't seem to want it” she told caller Brian.

“You can’t do that without the population agreeing,” she said. 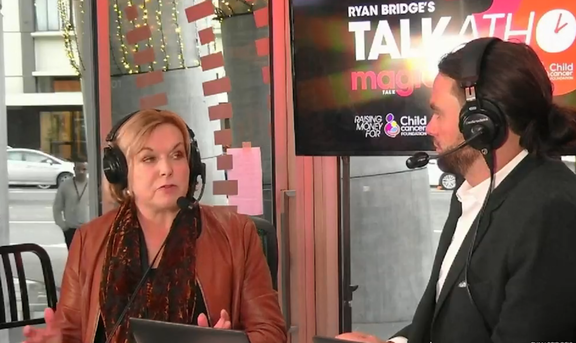 “I don’t think our communities support it either,” she said, reminding host Jack Tame the controversial Police Armed Response Teams trial had been scrapped last year because communities in the places they were deployed didn't approve.

(There were other reasons too. Newshub Nation revealed the ART actually did mainly routine work, like traffic stops, bail checks and attending accidents. RNZ revealed officers failed to keep proper records of callouts.)

The Police Commissioner decided the ARTs did not have support six months before Williams became the police minister. The National Party supported the decision at that time.

Three days after her TVNZ interview, Newstalk ZB’s morning host Mike Yardley asked the minister about “renewed calls” for gun on the hips of cops  - though there had been none at that point from any politician, political party, community group or the Police Association.

Yardley claimed pressure from “woke pressure groups” persuaded the minister not to restore the ARTs - and seized on this response from Williams when asked why she gave pressure groups “the time of day:”

“I’m not giving the them the time of day. I’m talking about the communities I represent  - which is the Māori and Pacific communities - who told me loud and clear the general arming of police and especially the ARTs are a real concern to them.”

When that interview was over, Yardley rushed out an opinion piece for the Newstalk ZB website and the Herald.

“The Police Minister duck-shoved my suspicions by arguing that she was solely representing the concerns of Māori, Pacific, and South Auckland communities -- not the pressure groups," he wrote.

"The whole interview could have got sidetracked if I had got preoccupied over whom she says she's representing. She's the Māori and Pacific Minister of Police, apparently,” he added.

It would have been better if he had focused on that - because he and his fellow ZB hosts, the Herald and the National Party leader all seized on her comments subsequently.

But Yardley chose not to clarify that apparently outrageous claim. Instead he questioned Williams as if she was the spokesperson for the pressure groups he disapproved of so strongly. 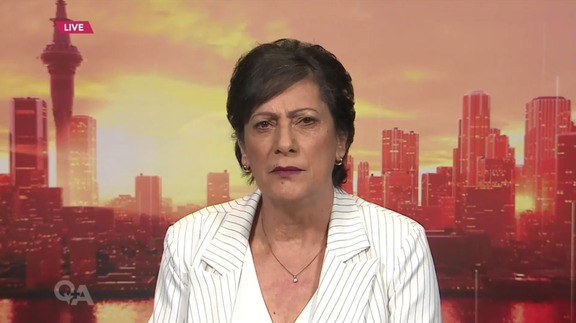 Williams didn't endorse any statement or any group he mentioned. But that didn’t stop ZB and sister paper the Herald turning all this into news.

“Police Minister Poto Williams will not be backing down on her strong stance not to support the general arming of police - because the Māori and Pacific Island communities she represents do not want it," said a story with the bylines of three reporters on the Herald website soon after.

The so-called strong stance was one every police minister and every government so far in recent history has also maintained - and not because of any connection to Māori and Pacific Island communities.

The Herald went on to say “a number (of its readers) responded saying they wanted to remind the minister she represented all New Zealanders and not just Māori and Pacific Islanders.”

On the ZB website the same story headlined like this: Cops and public fume as Police Minister rejects permanent arming of officers  - though that really meant "some ZB listeners and Herald readers" getting in touch, including - apparently - some police officers.

“Unfortunately the Police Commissioner gave in to a vocal minority who actually doesn't have to live next door to these people," she said.

She repeated that on RNZ’s Morning Report the next day, though she didn't mention those objections on Magic Talk just six days earlier when she told host Ryan Bridge community consent was crucial.

Six days after that she was interviewed by Bridge again on The AM Show - and claimed the Police Commissioner was pressured by government to scrap the ARTs.

On Twitter she intercut those comments with Yardley’s ZB interview of the minister:

Poto Williams should be sacked as Police Minister.

We were both interviewed about Armed Response Teams this morning & her refusal to back the police is unforgivable. pic.twitter.com/QjJDRFAgEC

The AM Show didn't ask for any evidence the government influenced the ART decision - and Collins didn’t offer any.

Next day The Herald’s front page asked “Armed police in NZ: Is it time?”

Collins was back on ZB echoing Yardley‘s disgust about Williams failing to condemn People Against Prisons Aotearoa, a small pressure group that called for defunding and disbanding "the racist police force". 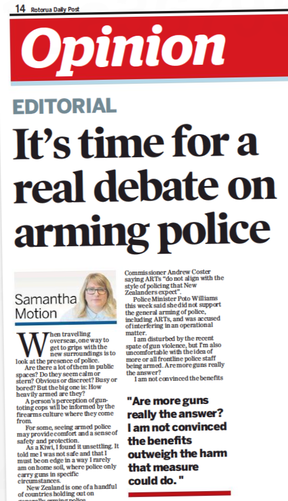 “If there is a group she is supposed to represent and have the back of it’s the police . . .and if there’s a second group she should be representing, it’s the people of Christchurch east who elected her, who are a mix of ethnicities.”

Governing for a local electorate is not what a good minister is supposed to do, as a former press gallery reporter would surely know. And advocating on behalf of police officers is the job of the Police Association - not the Police Minister.

Last Sunday, another ZB host - Kerre McIvor - breathed more stale air into it with a column in the Herald on Sunday:

“I would have thought a police minister would have the interests of Police at heart. Then New Zealanders as a whole -- and not just the sectors most dear to her heart.”

Seizing on a minister’s misstatement in answer to a question about pressure groups does nothing to help fearful or under-fire police officers.

McIvor said Williams had not sought the role when she was appointed as police minister last November.

That was a detail in a Stuff profile of the new minister at that time.

The same article also says she was reluctant to talk about racism in policing.

“I’m not the sort of person to go in boots and all,” she told Stuff at the time.

But McIvor wound up her column last weekend with this:

“There must be nothing more disillusioning than hearing your minister rabbiting on about unconscious bias and systemic racism.”

In the media the minster has only briefly spoken about the issue when asked about it by the media.

It’s been talk radio hosts, reporters and headline writers “rabbiting on” about race lately while professing to care about police officers’ safety.