At the biggest national protest for years last week, farmers made it clear they are unhappy with the government and they feel unloved by the country - and the media. 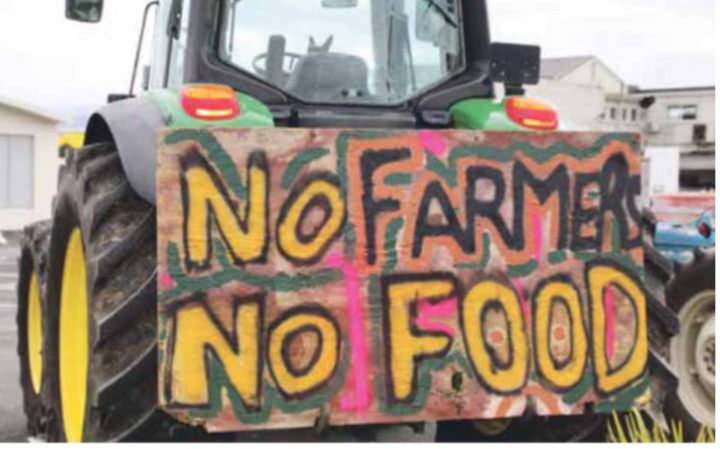 In one sense, the Groundswell protests in 55 towns and cities on 16 July last were poorly timed for farmers.

It was not a great time to be away with heavy rain on the way that caused flooding in many places the next day.

Friday morning’s news shows trailed the upcoming rallies heavily. The same day, the National Party amplified one of the issues with a social media video - showing farmers being jabbed painfully in the backside with a bright red pointy arrow marked ‘Ute Tax’.

Newstalk ZB’s Mike Hosking gave ‘The Howl of a Protest’ eight out of 10 and declared it a success on his show - even before the convoys rolled.

Once the tractors and utes did hit the roads, the major news sites fired up live blogs - and when it was all over it led the evening’s TV news bulletins.

In the weekend papers the following day political commentators and columnists who had seen the scenes warned the PM and her party not to dismiss them just because few farmers vote Labour.

Organisers were aware of the importance of creating the right image for media from the start.

In a Facebook message to supporters, Groundswell founder Laurie Paterson said he wanted all protestors to be “100 percent on message”.

But the main message was not clear for those seeing images on TV and online. Slogans on vehicles griped about not just the ute tax and stuff like water reform - but also Māori language and the fact we have a female PM from Morrinsville.

“How constructive was it to have utes hooning around with slogans like 'Black Utes Matter' and ‘Jacinda is a communist bitch'?"  Tova O'Brien asked Dairy NZ boss Tim Mackle on Newshub Nation last weekend.

In an opinion piece for NZME - sourced from her Facebook page, Balclutha-based farmer Shelley Krieger pointed out the protests had been organised before the 'Ute Tax' issue cropped up and Groundswell already had six other concerns listed - freshwater management, access to overseas workers, the Emissions Trading Scheme, Significant Natural Areas, indigenous biodiversity rules and high country land reforms. 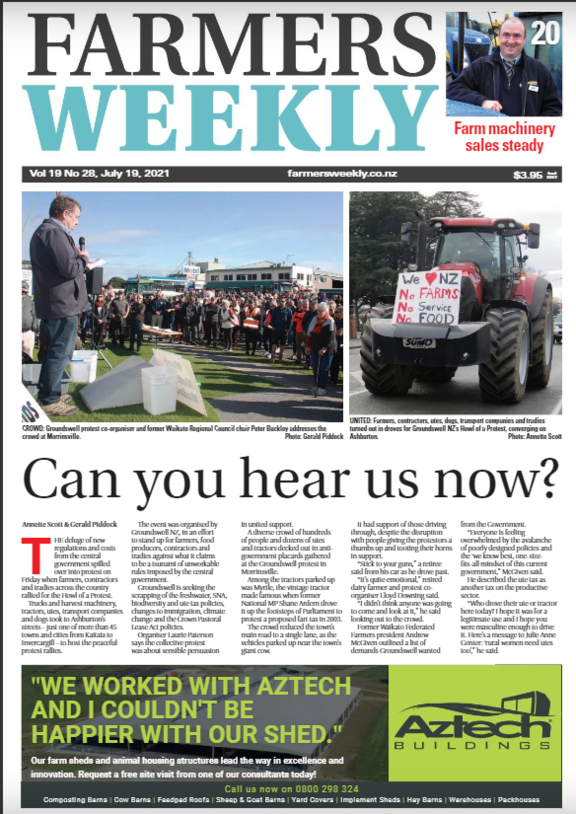 One message that was loud and clear from farmers in the media that day was a “tsunami of regulations” - and the costs associated with them.

“When you talk to farmers get fencing off waterways and and planting native tress - that's a simple concept you can visualise. Climate change and methane are things we don't have answers for yet but farmers are getting blamed for it," National MP (and farmer) Barbara Kuriger said on the Rural Exchange radio show, reporting from a rally at Te Awamutu.

But sympathy was not universal in the coverage.

“Did those protesting farmers feel the same way when their industry received the best part of a billion dollars in support for Mycoplasma Bovis?” Jack Tame asked on his Newstalk ZB show the next day.

"The Environment Ministry has proposed easing its originally proposed freshwater regulations and may now impose less stringent requirements on farmers to fence stock off from waterways," he wrote. “Basically, some members of one of the most affluent sectors of society are trying to play the victim card ... to defend their utes, and their right to pollute,” he wrote.

But while complaints about costs hitting farmers were easy to find in media reports, it was harder to find a coherent summary of what these costs where, why they were unreasonable or unfair or whether they really threatened profitability - or even, as some claimed - the very viability of farming in the foreseeable future. 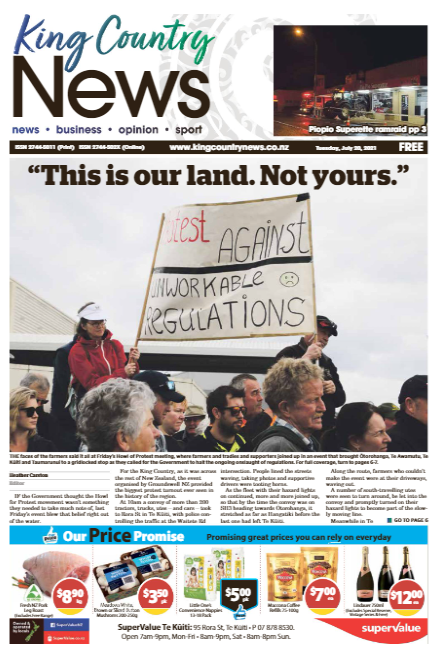 Many pundits reckoned the 'Howl of Protest' threw into sharp relief the gulf between between urbanites supportive of environmental policies and many rural people determined to resist the cost and the implementation.

Rural and regional media debated that too.

“The urban rural divide has grown so wide you just about need a waka to sail to the other side to the other side,”  Heather Carston, editor of the 107-year-old King Country News, wrote in her editorial last Tuesday.

King Country News devoted several pages to the Groundswell protest in the region in an edition with the stark front page headline: “This is our land. Not yours.”

The headline was a quote from a protester complaining about the rules for Significant Natural Areas, which prevent some farmers fully developing or converting some of their land. But it is a loaded headline for tangata whenua given the history of land confiscation and conflict there.

The paper quoted Lee Smith, a Groundswell organiser in Ōtorohanga, as saying climate change policies were “crucifying farmers” in her speech at the rally there.

“Some of the decision-making is derived from pressure imposed by overseas groups who are unaccountable. The country is ours, not the United Nations,” she complained.

The report also said her challenge to the media drew a roar of support.

That was echoed by a fierce speech delivered in Gisborne by local councilllor and Kerry Worsnop - published in full by The Gisborne Herald last weekend.

“Almost all of the grievances that we bring here today have their roots in a fancy idea dreamed up in Wellington which is then rammed down the throat of provincial New Zealand,” she wrote.

Can you hear us now? said the front page of this week’s Farmers’ Weekly along with images of the rallies.

But inside, editor Bryan Gibson was more neutral.

“We’ve just not been able to bring everyone along on the (sustainability) journey and it’s hurting our sector. What’s most disappointing is that in the end, everyone involved wants the same thing,” he wrote.

“There’s been a failure of communication and leadership. That responsibility falls on the Government, industry leadership and every other stakeholder,” he wrote.

In a piece in The Spinoff asking : How real is the rural-urban divide? Laura Walters said media coverage focused on the “ute tax” and “painted farmers as out of touch.”

“Some overly-simplified reporting ignored grievances about what farmers believed was a poorly thought-out regulatory work plan - and a government that continued to promise engagement without actually listening,” she wrote.

The price of food

In the Herald this week senior writer Simon Wilson made the point that beef and lamb prices are strong and near-record dairy payouts are coming up.

The "No farmers, no food" protest slogan was  a good one, he said.

“But we also know that it's not, fundamentally, about our own food. All those sheep in the paddocks - 95 percent of their meat is destined for export.

The exports fetching higher prices there means our food is costing more too.

That became a media theme this week - and perfect timing for the RNZ data journalism project: Who’s eating New Zealand?

RNZ's Farah Hancock showed how meat costs a lot more now even allowing for inflation - and why.

"If a housewife in the middle of Oxford in the UK is prepared to pay a certain price for a cut of meat, we have to match that in New Zealand," she said. "We are price takers, not price makers in this country," Beef + Lamb NZ chief executive Rod Slater told RNZ.

But it also costs more here than in some places overseas right now.

Kiwis in the UK posted details of meat on sale in UK supermarkets much cheaper than deals on offer at ours (presumably not only ‘housewives’ in the UK buying it and setting the prices...).

We’ve been here before  - and next Thursday, we’ll be going there again when the Commerce Commission releases its draft report competition in the grocery sector.

Stand by for more headlines on that issue ...

While farmers here see some of the benefits of the higher prices paid both here and overseas, urban New Zealanders sympathy for farmers will be strained if they are struggling to cover the rising cost of essential food, let alone a future hike in the price of a new ute.