The clock is ticking for the government’s proposed new public media entity. The next step is a business case and a new charter being drafted behind closed doors. But RNZ already has a charter that’s now under review  - and could bring greater scrutiny of government's plan. 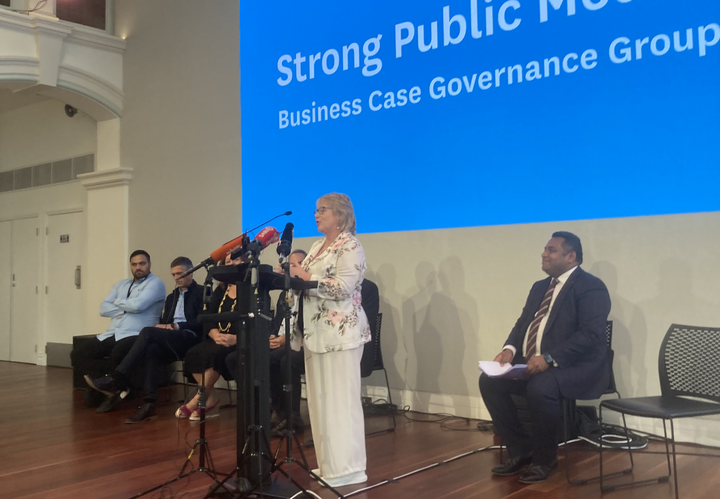 One of this government’s projects disrupted by Covid since the last election is its proposed new public media entity to replace RNZ and TVNZ before the next election in 2023.

It could be the biggest shake-up in the media so far this millennium - depending upon exactly what is proposed in the end.

The cabinet paper outlining the proposal and comments by the Minister of Broadcasting and Media Kris Faafoi have made it clear it will have some income from the Crown and some from other sources - presumably advertising and sponsorship.

Kris Faafoi has also said everything that’s currently available commercial-free will remain so - and it will have a charter to underpin what it does. Business brains from the company Deloitte are currently running the numbers on what it could cost to develop, implement and run a new public media entity.

The last major move in this process came at the end of March when the government appointed people to oversee the proposal - the Strong Public Media Business Case Governance Group (SPMBCGG).

That group will examine the Deloitte business case before the Minister takes it to Cabinet in October - just four months from now.

The SPMBCGG was also instructed to seek views and opinions about the new entity but the Minister told Mediawatch in March the public would not see the business case before Cabinet considers it.

All that was three months ago. What’s happened since then? 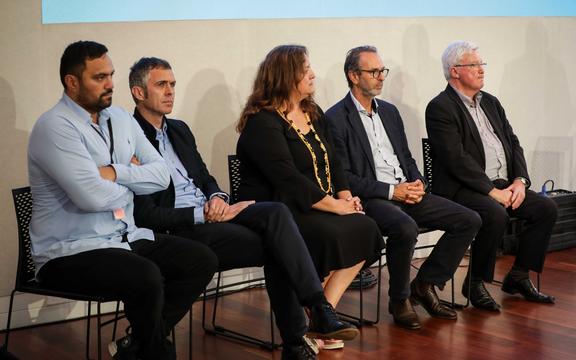 In May, a question to the Minister from ACT leader David Seymour revealed nearly $400,000 was spent on a earlier draft report by another crop of consultants from PWC which mainly set out the state of the media landscape today.

“Deloitte were therefore contracted to go through the full five-step business case process,” he said.

A further question from the ACT leader revealed that would cost another $500,000.

When asked if Ministry for Culture and Heritage officials could have done preparatory work rather than costly consultants, Kris Faafoi said the Ministry was “a small shop and we know this is a big piece of work.”

But the “small shop” has got a lot bigger lately.

Last week a spokesperson for the Ministry for Culture and Heritage told Newsroom 14 people were working on programme - 11 contractors and three employees.

“It is common practice to supplement the standing capabilities of government departments with external subject matter expertise because of the scope and complexity of the work,” a Ministry spokesperson told Newsroom.

And not only is it complex - time is tight. 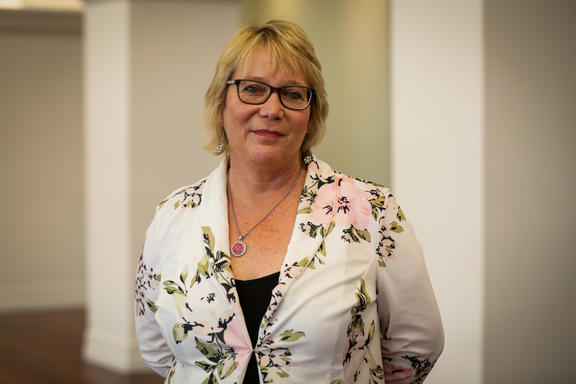 The Minister has previously said the business case and a draft charter for a new public media entity should be done by August so the eight-strong SPMBCGG can weigh it up before he takes it to Cabinet.

Clearly a lot hinges on the Deloitte business case, but it’s still far from clear what form the proposal will take.

“I actually don’t think one can say we are looking a fait-accompli complete merger of RNZ and TVNZ. We have been asked to put together what is possible around a single entity and a single piece of legislation that allows our public media to do more,” she said.

Tracey Martin also indicated the business case - or part of it - would be made public before the government decided what to do.

“The very first thing we’ve got to do is make sure we articulate the problem really clearly. That’s the strategic case of the business case. I believe it’s the intention of the group that as soon as we can  . . . we would like to put that out into the public domain so that people can have a look at it - and so that we get some real clarity about whether we have we got this right,” she told Radio Waatea.

”Getting a targeted voice of what the public broadcaster should be be doing and delivering . . . we absolutely need to get that in. That’s our challenge in a very short time frame,” she said.

In mid-May Tracey Martin spoke to Newsroom.co.nz’s Stephen Parker, who concluded the governance group was shifting away from what he called “a heavy-duty restructuring of RNZ and TVNZ” and towards “options for a new oversight entity, with the RNZ and TVNZ brands retained underneath.”

“That doesn't mean that you would take RNZ and TVNZ and just smoosh it together. There could be an overarching entity over the top,” Tracey Martin told Newsroom.

“Whatever that overarching entity is -- it may have multiple brands underneath,” she said.

“We can't dictate what the operational model of the new entity would be," Tracey Martin went on to say.

Newsroom’s Stephen Parker concluded the group is defining its remit to be “more architect and less house builder.”

If so, that runs the risk of repeating the problem a previous Labour government created in the 2000s.

First it gave TVNZ a public service Charter - and then demanded it set up non-commercial channels, even though TVNZ's focus was to harvest commercial revenue for itself  - and a bit for the Crown.

To use that building analogy: the government architect asked it to build a  public space when it was already pre-occupied with running a convention centre and casino that it had already built. 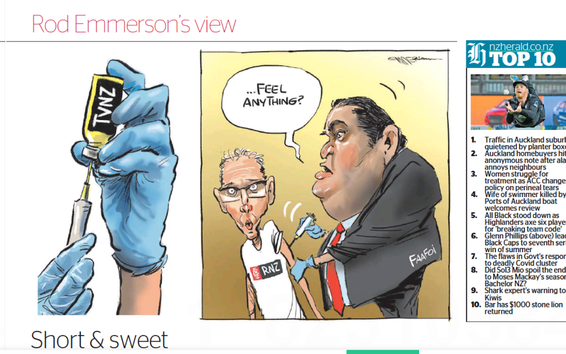 Rod Emmerson's take on the plan for a new media entity in his Herald cartoon on April 1. Photo: photo / RNZ Mediawatch

TVNZ doesn’t have that public charter any more. The National-led government scrapped the law that enshrined it in 2011.

But RNZ's charter is still set out in law. It must be reviewed every five years and it is currently up for review - and that could now become an avenue for scrutiny of the government's plans.

Since mid 2019, National’s broadcasting spokesperson Melissa Lee has put a series of written questions about the review plans to the Minister for Broadcasting and the Prime Minister.

“The minister has indicated that he would like that review to be put on hold  - and for the creation of the new charter for the proposed new entity to be the substantive process,” RNZ chief executive Paul Thompson told Mediawatch last March.

“I think it gives RNZ a good opportunity to contribute to the formation of the new charter," Thompson said.

In February this year Kris Faafoi had written to the Speaker of the House saying it wasn’t “efficient or practicable” to review RNZ’s charter this year while the Strong Public Media programme was working on something to replace RNZ altogether.

On 6 April  - within a week of the government unveiling the SPMBCGG and its mission of drafting a new charter - Parliament’s Economic Development, Science and Innovation Select Committee announced that it would conduct an inquiry into the review of Radio New Zealand’s existing charter.

Among the issues they raise are these:

People can make submissions until 13 August.

“I would encourage anyone who has an interest to make a submission. We will hear all the submissions and then the committee will write a report and that will be presented to the House of Representatives,“ the committee’s chair  - Labour’s MP for Hamilton East Jamie Strange  - told Mediawatch.

Why did the Committee decide to conduct an inquiry when RNZ’s charter could be superseded by a new one for the new media entity soon?

Jamie Strange said the caucuses of both parties represented on the committee - Labour and National -  discussed the issue, as well as the Committee itself.

“We decided that it was the right thing to do to open the inquiry into the review so that people can specifically focus on Radio New Zealand in terms of its charter. The report that we write will no doubt feed into the work the Minister is doing but we wanted to put a specific focus on RNZ as our public broadcaster,” Strange said.

National’s broadcasting spokesperson Melissa Lee is on the committee and has pushed for the review.

“I believe this session will be absolutely vital to understand what is going on in the Government's Public Media plans. We want to get to the bottom of the myriad of issues that surrounded public broadcasting policy in the last Parliament,” she said on Facebook in March.

“People can make their own submissions and share what they want to share. As the chair of the committee I will encourage submitters to stay focused on the terms of reference which are specifically about the RNZ charter. When we do our report the report it will be focused on the charter,” Strange told Mediawatch.