The Herald's dedicated property section printed 64 articles under the banner 'Our New Auckland' without declaring they were sponsored by Kāinga Ora, prompting NZME to review its processes on sponsored content. 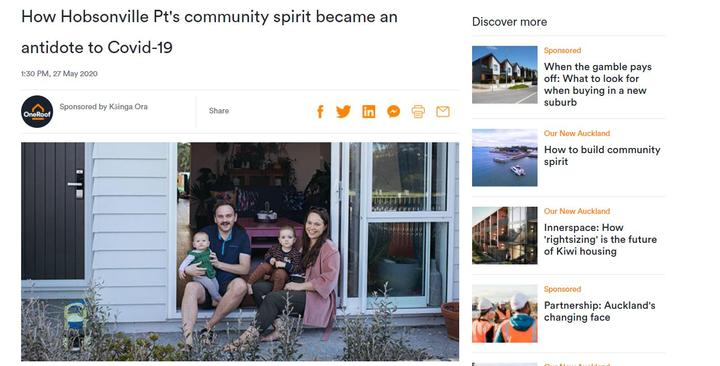 Last May, an article appeared in the Herald’s dedicated property section OneRoof section about Arena Williams’ efforts to bring her community together following the first Covid-19 lockdown.

Williams was standing to be selected as Labour's Manurewa candidate, but the story was about her efforts to send out care packages to older and isolated people in Hobsonville Point.

It was also, unbeknownst to readers, a piece of sponsored content for the government's housing arm Kāinga Ora.

This week, Stuff reporter Henry Cooke revealed that the organisation paid NZME $25k a month for that story and 63 others in OneRoof.

The stories had headlines like 'Why buy in a Kāinga Ora-led development? All things property under OneRoof'. They went up without any text declaring they were paid-for content.

After it sent questions to NZME about the stories, the company added disclaimers to the stories and said it was reviewing its processes.

It has opened up new revenue streams for a struggling media industry, but has also blurred the once fiercely guarded line between advertising and editorial content.

It depicted a walkthrough of a new house built by the organisation, accompanied by text pointing out the home's mod-cons and an uplifting soundtrack.

Stuff’s editor Patrick Crewdson assured Mediawatch that wasn’t the case though: the video was done by news.

He linked to the organisation’s policies on sponsored content, which include that it always be clearly labeled, and not come with the expectation of influence over editorial content.

Those kinds of rules are important for organisations dealing heavily in sponcon.

As this week showed, if they’re not clearly established in the minds of staff, things can get pretty muddy, pretty quickly.