Stories about local issues, from housing developments to cycleway constructions, are nearly always illustrated the same way. Mediawatch asked a Voyager-winning photographer why angry people with their arms folded are so ubiquitous in our media. 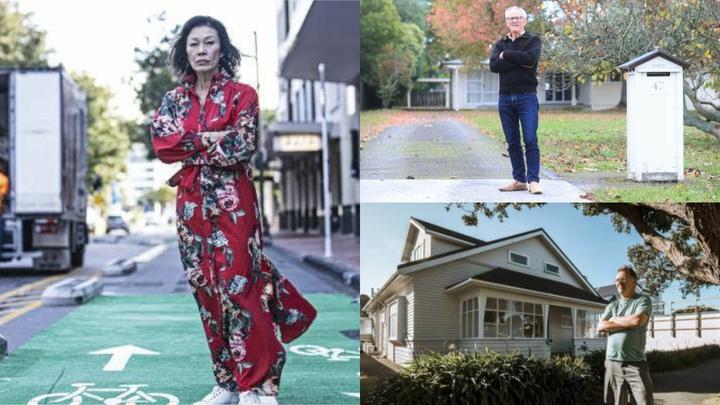 A selection of angry people with their arms crossed featured in Stuff recently Photo: Stuff

If you’ve ever read a story about a contentious local issue, you’ll have seen the photo.

It could be about a housing development, a cycle path, or a safety upgrade to an intersection, the illustration will always be the same.

In the foreground, a person stands with their arms folded, a stern expression on their face.

In the background is the site of the progress they’re opposing.

This style of photo has been employed repeatedly in recent times by Stuff. Its story on a cycleway in central Auckland contains no less than three photos of Soul Bar operations manager Geeling Ching standing with her arms crossed on the green-painted path.

Another story about a 10-home development in Cambridge features the folded arms of an obviously disgruntled resident, who’s worried that housing will sully the increasingly unaffordable town’s reputation.

But Stuff is far from the only media entity employing this format.

It’s a regular feature on the popular ‘Angry People in Local Newspapers’ Facebook page, as well as the much less frequented local version, ‘Sad Faces of the NZ Herald’.

In 2017, the blog Greater Auckland highlighted the photo genre in its game of NIMBY bingo.

Overseas, the Toronto Star used the visual cliche so often that Toronto Life composed a complete taxonomy of its crosstown rival’s angry people with their arms folded.

But why are these angst-infused illustrations so common?

Voyager-winning photographer Brett Phibbs has taken his own fair share of these photos. He says the main reason is because they are an easy and obvious way of portraying frustration.

"Without bagging anyone in particular with photographers, for some of them it's an easy go-to to get the point across because folded arms are stern and they make a statement," he says.

"When someone folds their arms they're either listening intently or disagreeing with someone."

It is not only photographers initiating the folded arms though. Phibbs says subjects will zone in on the pose without being prompted.

Photographers do not always try to convince them to do something different, particularly when they're not passionate about the job, he says.

"Sometimes [the photo subject] just do it naturally, and you think 'this story's not what I want to do', so you just go with the flow. It's a bit lazy in a way."

Phibbs says one way of reducing the number of angry people with their arms folded in our newspapers is to ask people to think of other ways of portraying anger.

Though he rules out photographing someone in the midst of an angry scream, or giving the fingers, he says it's possible to look disgruntled while "leaning on something", like a fence or post.

"Just squint. Look intense. Leaning on something. Put your hands in front of you. Nice casual kind of lean. And the photographer will do the rest."

Several photographers at Stuff were contacted for comment ahead of this Mediawatch story.

They did not respond.