For whom the bell trolls - cyclists

While record-breaking floods threatened to sweep away bridges in Canterbury, the inundation of the Auckland Harbour Bridge by cyclists  made headlines too - and sparked a big backlash on talk radio. The subsequent announcement of a new big-budget bridge just for cyclists and walkers further inflamed the divisive urban issue of ‘bikes vs cars’. 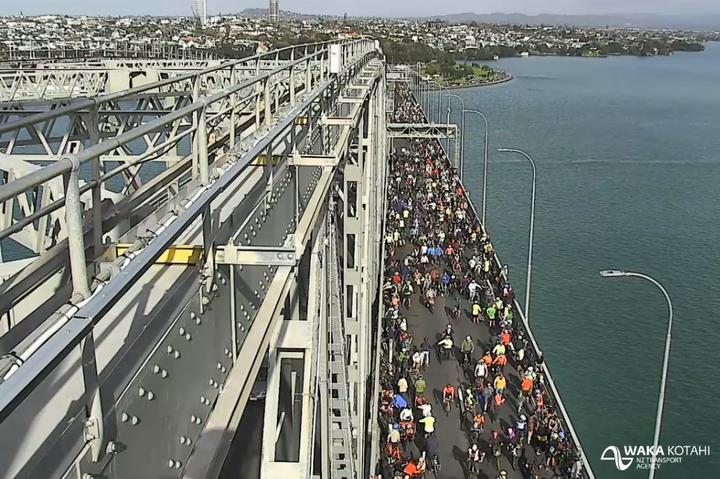 The organisers insisted forcing their way onto the Auckland Harbour Bridge was not the purpose of the ‘Liberate the Lane’ rally last weekend.

But part of the plan was to attract media attention - and that certainly worked.

“Well done, good on ya,” Duncan Garner said on the AM show.

“People lose their lives for change - albeit apartheid is on a slightly different scale to scaling the Harbour Bridge by bike,” he said.

Certainly is, and he didn't say what South Africa had to do with it - but he wasn’t the only one harking back to apartheid.

In his newsletter and podcast The Kaka, commentator Bernard Hickey said cycling in 2021 was a bit like The Tour in 1981.

“Pro-tour protestors tended to be provincial, older, more conservative and all about law and order.  The tour was an echo of the Vietnam era protests, which in retrospect had much of those same culture war elements. It’s turning deadly serious,” he wrote.

The media took the issue seriously too  - and took sides - this week.

Newstalk ZB’s hosts exploited this known wedge issue in Auckland for all it was worth.

On Early Edition, Kate Hawkesby compared the lane liberators to the Mongrel Mob, while her partner Mike Hosking said they were wasting their time.

“Don’t stand there wasting every one’s time protesting for something that’ll never happen,” he said.

But cyclists in Auckland last Sunday did not just stand there - they barreled past the police and onto the bridge - and it was that that made many ZB talkback callers uptight.

When Kerre McIvor took over on ZB, it was personal.

She told listeners she was caught in the traffic chaos during her own Sunday drive to the North Shore to look for a house to buy.

At first though she loved seeing families and kids on their bikes - but she did not realise they were part of a protest that would slow her down even more.

“Rats in lycra” she called them in her opinion piece for ZB’s website - and on the air she went on to call hundreds of fellow Aucklanders “gits”, “tits” and “huas”  - as well as freeloaders and rich, snobby hypocrites.

“Sitting around Auckland's leafy suburbs with a median house price of around $3 million, they would have sipped their chardonnay or pinot noir or for the younger ones, kombucha, and thrilled to the excitement of telling the story of the day they took over the Harbour Bridge ... as they push around the gourmet sausages on the BBQ at the beach pad in Omaha that they won't have cycled to ... because how would they get the toys and the Farro hampers up there?”

That’s pretty sustained abuse and stereotyping of a single group of people. (Farro is a posh food shop in Auckland by the way.)

But was it a sincerely held view - or just an overwrought effort to rark up talkback callers on an obviously divisive issue?

In his online newsletter More than a Feilding - David Slack, one of the MCs at the pro-bike protest, reckoned she might be having a stab at satire.

‘But to make it work you can’t just describe the ghastly company you keep and their surroundings - and ascribe it all to a bunch of strangers,” he concluded.

But Slack's main point was that she could have pulled over and taken time to find out what the protestors were really like - rather than just form drive-by opinions from behind the wheel.

From that distance McIvor also ridiculed any environmental motivation the cyclists on Sunday might have had, though part of their premise is that more people on bikes will pretty quickly speed up jaunts over the bridge for everyone - including drivers hunting for a new home on the other side.

While the ZB hosts painted a vivid picture of an anarchic mob on the air, the pictures on TV reinforced it.

Talk radio hosts and callers complained the invasion had unfairly disrupted car travel without warning, Waka Kotahi - possibly anticipating a repeat of the rally in 2009 which ended up with cyclists in the bridge - had announced the previous day it would close two lanes in advance of the rally.

TV reports made a big deal of the bursting of the barrier - and that just one arrest arrest was made.

The appetite for tolling cyclists - as well as trolling them - is strong on talk radio it seems.

But it wasn’t all one way traffic in the media.

The NZME stable housing Newstalk ZB is also home to the Herald, whose senior writer Simon Wilson is an advocate for more cycling in the city.

“Cycling on the bridge challenges two important ideas: that the bridge is full and that everyone will keep driving,” he wrote recently under the headline Cycling the Auckland Harbour Bridge is a climate issue

He even urged Herald readers to bring a bike to last Sunday’s "Liberate a Lane" rally.

That article was published under the banner of Covering Climate Now  because the Herald is one of 250 media outlets from around the world that committed to climate change coverage two years ago.

(Stablemate Newstalk ZB however, did not).

All the noise about liberating the lane and lawlessness on the bridge last Sunday could have been quelled if they had known a plan for a new bridge just for bikes and walkers was about to be revealed.

On Friday Transport Minister Michael Woods unveiled huge changes to the multi-billion dollar transport plan - including a second harbour crossing for bikes and pedestrians - with an estimated bill of $785 million.

But in the same announcement, previously-announced road enhancements were canned because of cost - and that only increased the angst about Auckland cyclists getting a promise of more than they had asked for.

Before the government announcement, Bernard Hickey - who likened the cycling debate to the 1981 Springbok Tour - made this observation about the bigger picture:

“When you look ahead 10 or 20 years, one of the big battles will be between car-driving suburban commuters and people living close to the major city centres who want to use the roads between their homes and work and schools for other things including cycling and walking," he said in The Kaka.

That battle has already begun - and the media will have to get a lot better at reporting this complicated conflict over our streets - with people on each side asking - which side are you on?