A green light for a travel bubble with Australia was a good news story for people separated from loved ones - and businesses needing the cash of free-spending foreigners. But were the bubble-happy media too keen to accentuate the positive when the likely benefits are far from clear? 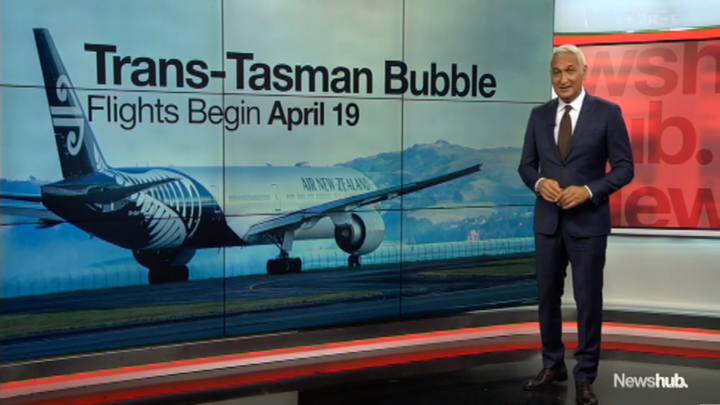 Mike McRoberts on Newshub at 6 with news of the travel bubble announcement Photo: screenshot / Newshub

When the prime minister announced on Tuesday quarantine-free travel to Australia would begin in two weeks, many in the media were keen to point out it was old news for them.

Across the Tasman, the lead story in Rupert Murdoch’s daily The Australian said flights would begin from 19 April - or maybe the 12th.

“Cabinet hasn't met yet. We're a pretty dedicated bunch but we don't meet before 7:30 in the morning,” he replied wearily.

When the announcement came, it was greeted with joy from those separated from loved ones.

But it was a risky call to put her mum live on air later - without telling her:

“Private number? Who the f***’s this?” she blurted, before Chelsea warned her she was on the radio.

“God bless Jacinda, she came through,” said her mum when she knew a reunion was imminent.

But opposition politicians - and some ZB hosts - reckoned the bubble would have been blown up long ago but for the PM’s abundance of caution.

Media zeroed in on tourist towns and businesses desperate for fresh foreign customers - and echoed the bullish predictions of an immediate flood of free-spending Australians - such as Tourism NZ’s estimate of benefits of $1 billion a year. 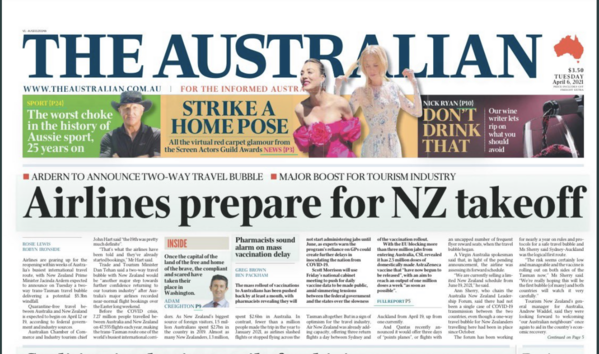 But some reporters cast doubt on that.

That was echoed by Newshub’s Australia reporter Emma Cropper.

“Most Australians I’ve been talking to here just want to go over to re-unite - not for holidays - because they’re still quite nervous,” she told Newshub 6pm last Tuesday.

Forum co-chair Ann Sherry - formerly chief executive of Westpac in NZ - said there would be significant pent-up demand (including presumably at Sydney Airport where she is a director).

Certainly seemed to be true watching Newshub 6pm on Wednesday:

“Get ready for the Aussie invasion,” said presenter Melissa Chan-Green, while Mike McRoberts spoke of a “100-fold increase in interest” since the announcement the day before.

That startling stat came from Greg Foran, the chief executive of Air New Zealand, but of course the spike is coming off a very low base.

But Infometrics senior economist Brad Olsen told Newstalk ZB the $1 billion figure was based on 800,000 tourists coming to New Zealand - a target that may be hard to hit given trans-Tasman travel is now a ‘flyer beware’ affair.

“I’m also interested in how many of us Kiwis hop across the ditch and take our tourism money out of the domestic market,” he added - a point not much mentioned in bubble-happy media reports.

Economist John Carran from Jarden Securities also told RNZ the economic benefit might be dented by local consumers diverting their spending to an Australian holiday - and Australian media were talking up that prospect there, with 9 News calling it “a pipeline of Kiwi cash”.

“Put simply - many Kiwi destinations may struggle to attract Aussie travellers during the colder months, and instead will miss out on New Zealanders who head to warmer destinations across the ditch,” he told RNZ.

He estimated broadly that if patronage returned to about 60 percent of pre-Covid levels the net gains for major centres could be close to $225 million compared to last year.

On Wednesday Newshub’s Tom McCrae - reporting from a near deserted Auckland International Airport - talked up the number of New Zealanders taking their dollars about out of this country.

“Four hundred thousand passports have expired in the past year. Since the bubble was announced yesterday the Department of Internal Affairs has seen a massive spike in people looking to renew them,” he said, predicting the deserted departure halls would be frantic in 12 days time.

And where there’s pent-up demand - there’s big money spent up on advertising.

Huge campaigns are planned on both sides of the bubble.

But at times Tourism Inc has been advertising to us here already - even if we didn't know it. 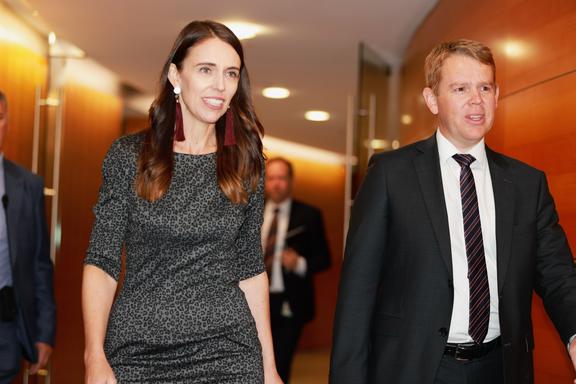 At 8:30pm on the night the bubble was announced, TVNZ 1 would have seen episode eight of Lap of Luxury - an hour long ten-part series taking viewers “inside the country's most indulgent accommodation experiences”.

It is made by local company Screentime and features lodges all bookable from one company and the credits acknowledge the assistance of both Tourism NZ and Tourism Australia.

Few viewers would consider it a genuine documentary, but How We Work is in TVNZ on Demand’s ‘documentary and factual’ section.

The show - made by Nigel Latta and his company Ruckus - got innovative Kiwi business people to collaborate on a project online and face-to-face.

He concluded the science proved the latter is clearly better.

The only hint that Tourism NZ picked up the tab comes right at the end when Latta said: “Thanks Tourism New Zealand.”