Ten years after: Marking a major milestone in Christchurch

Commemorating the anniversary of the deadly Canterbury quake was a huge undertaking for the media this week.

There was raw, live coverage alongside retrospective deep-dives; personal and political stories side-by-side - as well as journalism fixed on the future. Mediawatch looks back at it all and asks one Christchurch reporter about the tricky task of summing up ten turbulent years. 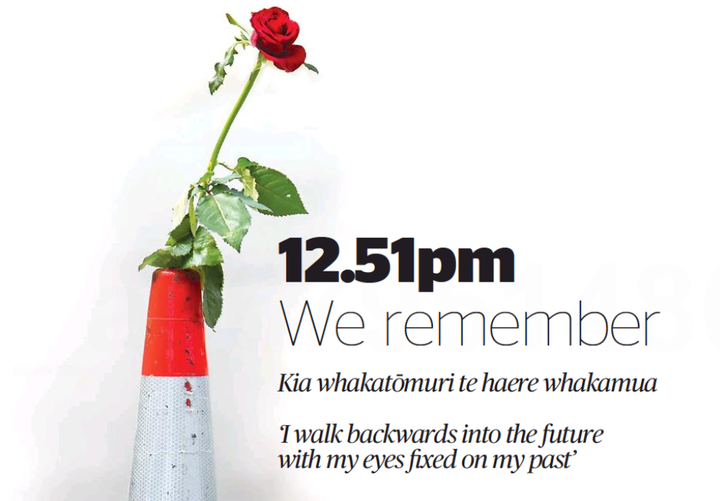 The front page of The Press to mark the 10th anniversary. Photo: The Press

John Campbell opened TVNZ’s Breakfast before dawn on Monday morning live from the official memorial to those who died 10 years ago. It took years to agree on the memorial’s design and even more to build it - making it also a symbol of recovery that is still a work in progress.

In the years after the quake, Campbell himself dedicated many hours to the problems of indecision, injustice and insurance in the city. The TV3 show that bore his name was also at times a venue for people to vent - literally in the case of its ‘caravan of complaint’

Now he’s at TVNZ, but last Monday he went in to bat for people striving for a resolution to the CTV building disaster and for people still in housing limbo - suffering “the hell of repetition,” as he put it

When he handed back to studio, co-host Jenny-May Clarkson told viewers the show would be dedicated to Christchurch.

“We make no apology for that,” she said.

Why would any one expect an apology for zeroing in on the milestone anniversary of a national tragedy?

Possibly because some people around the country may not have a great appetite for it any more. And even some who lived through it themselves may dread the “hell of repetition” when it comes to the sights, sounds and memories all over again in the media.

That same morning, RNZ’s Morning Report asked former CTV staffer Tom Hawker for his recollections  - and they ended up leading the news bulletin at 8am. After that, a promo played for Checkpoint which harvested a startling story of a life-saving amputation performed in the rubble on the day of the quake.

Some people got in touch with Mediawatch to say they didn't like stuff like that being morselised and amplified for the anniversary.

The Press senior reporter Philip Matthews said it was common for people to have a negative reaction to close-ups of the quake.

"Its a fairly typical response. Some people find it traumatising," said  Matthews, one of few journalists still at the paper 10 years on.

With colleague Charlie Gates, he had sifted through hundreds of hours of unbroadcast footage for Munted, a multimedia production to mark 10 years since the first Canterbury quake in October 2010.

"I know some people who still won't go into parts of the city, even if they weren't there on the day. When we made Munted we included very little of the day of the quake for that reason,” said Matthews.

"But it was important to bring those stories to national attention."

He recalls when Campbell Live was the only national media still covering the Christchurch disaster and its aftermath.

"You would see John Campbell standing at his waders in some flooded, silt-covered street in east Christchurch and you would sense that the rest of the country would be going: 'Come on, we’ve had enough of this.'

"People I know well who live in other cities would come down here or watch things on TV and say: ‘I can’t believe it’s like this.’

"I would think: ‘Where have you been?',” said Matthews.

Deciding on the approach and tone to adopt was tricky for media marking the this week's milestone.

But it is not a new problem. It comes up every year.

When I went to Christchurch to see how media were managing before the first anniversary in 2012, it was on a lot of journalists’ minds then.

“We don't want to be patronised or used simply as a backdrop for TV,” said Amanda Cropp - an experienced news journalist who had put her own feelings into words in a book called Shaken, Not Stirred - and who's now Stuff's business bureau chief in Christchurch.

The same day TV3 reporter Jeff Hampton was at the broadcaster’s temporary HQ at Addington Raceway, trawling through raw footage of the quake for an anniversary special .

“It's important and I think people would feel ignored if we didn't cover it,” he told Mediawatch in 2012.

"The news media played a vital role getting help to Christchurch and the images we sent out were a vital part of that."

(Jeff Hampton and long-serving producer Phil Corkery quit TV3 just before the fifth anniversary in 2016, lamenting the hollowing out of broadcast newsrooms in the city).

For the first anniversary, The Press published an epic 35,000 word pull-out broadsheet memorial with a profile on every victim.

The heavy lifting for that was done by Olivia Carville, a young reporter just starting her career when the quake hit.

Along with videographer Daniel Tobin, she escaped her own wrecked building to report vividly from the shattered CBD.

The Press building in central Christchurch was destroyed in the 2011 quake - but a paper still went out the next mornning. Photo: screenshot / The Press

She profiled each victim and interviewed the relatives. And the following year, she did it again.

Four years later she was working at the Toronto Star in Canada, where she wrote a personal piece about the anniversary - and how reporting it each year had taken a toll.

"I became the encyclopedia of the dead for The Press," she wrote.

“I wanted to break away from that and go somewhere where that didn't follow me. I always feel a lot of emotions around the anniversary and it's never something I have enjoyed,” she told Mediawatch ahead of the fifth anniversary in 2016.

"You're forced to reflect on what's happened since - and what hasn't," she said.

One thing that hasn't been resolved is how and why the substandard CTV building was built in the first place  - and who's accountable.

That's the subject of the confronting special podcast series Collapse by The Press publisher Stuff, released to mark this week's anniversary. 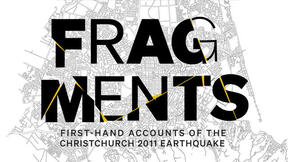 Producer Katy Gossett - a journalist in Christchurch for RNZ who reported the quakes 10 years ago - told Morning Report on Monday the anniversary was complicated.

"It is an important day. Some people will go to the service. I know some people don't want to go anywhere near it. Some say they feel anxious and nervous  - but they know the day will pass," Gossett said.

For her, it's also a reminder to be prepared.

"It reminds me I need to restock my water and emergency supplies - all the things that have lapsed a little bit." 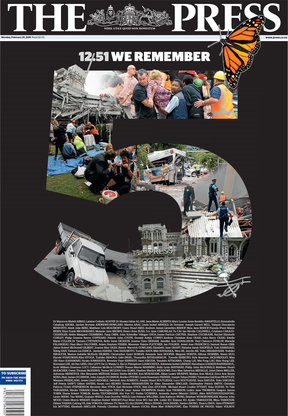 How The Press marked the fifth anniversary in 2016. Photo: supplied

The possibility of it happening again was the focus of an editorial in the form of an open letter that The Press published on the fifth anniversary.

The letter urged New Zealanders to stay interested in and engaged with the city's recovery.

And it ended with a warning:

“This disaster will not be the last to hit this country. The chance of a quake in another part of the country is high. Every individual, business and policymaker needs to be ready to cope with a disaster of this scale."

Within a couple of years, the Kaikoura quake struck further north.

“It is a day to stop and bow our heads - but today is also the day to reflect on how far we have come and look to the future,” current editor of The Press, Kamala Hayman, wrote in its special supplement last Monday, under the headline ‘10 years telling our quake stories.’

“Despite our losses, battles with bureaucracy and the dusty, noisy disruption of rebuilding, we have much to celebrate.We have much to look forward to.”

But she also noted bitterness over unresolved issues with the rebuild and incomplete anchor projects.

What’s been rebuilt  - and what hasn't - over the years was a major focus of Munted.

Matthews and Gates added a special final episode for this week’s anniversary to bring it up to date.

“Ten years is an obvious anniversary to mark, but I was surprised at the level of national coverage this time – and the tone of reverence in the coverage,” Matthews told Mediawatch.

“It was quite respectful and covered the tragedy, but shied away from politics largely. I was pleasantly surprised by it.”

Back in 2012, Press reporter Martin van Beynen told me it had become a “one-issue” paper.

Matthews said said the focus on the quake left its mark on the city's reporters.

“What we were doing was pretty hardcore and damaging on an emotional level  - and that comes with physical stress as well.

"We all had our own stuff to deal with too – houses falling down, kids upset, their schools being closed. It wasn’t like you were journalist and that’s all you you were.

“A lot of people got burned out and there's probably a handful of people at The Press from those times still at it."

For the first few years after the quake, news stayed honed in on the disaster  - the politics of it, the Canterbury Earthquake Recovery Authority, the struggle to repair the city.

"Since then other issues have sprung up. For example the mosque shooting has brought up issues that are just as important now.

"The lack of progress (of the rebuild) is like background noise,” said Matthews.